More Clothes for the Horses

A Week in Byron’s Hollywood Dept., Day Two: We’re spending a few days celebrating some of the actors who created the character archetypes of the classic motion pictures.

SHE STRIKES A PERFECT balance between wisecracking sourpuss Aline MacMahon and cute but acting-deficient Ruby Keeler in “Gold Diggers of 1933.” And she’s as strikingly attractive as you can ever want too see. Which only shows that Joan Blondell was able to move from being the main sidekick – with wisecracks galore – to part of an ensemble and still hold her own. Which is saying something when you’re up against a champ like MacMahon.And Blondell got one of the her finest moment in that movie, as the lead singer (or declaimer, as it happened) of “Forgotten Man,” one of the Hollywood’s few straight-on looks at the Depression. Ironically, by that point, Blondell was one of Hollywood’s highest-paid stars.(Before we let this movie go, let me share a DVD-release discovery. During the lead-in to the “Shadow Waltz” sequence, at 81 minutes into the movie, there's a general hubbub in which one of the ladies clearly can be heard saying, “Shit! I can't find my shoe!”)
She was a classic backstage baby, schlepping with her vaudevillian parents from gig to gig before they settled in Texas while she was a teen. There she won the 1926 Miss Dallas contest and made a strong showing later in the year as a Miss America contender. And it showed in a beautiful face that no amount of makeup could really enhance or obscure – but I speak from a position of pure surrender.

Blondell began working the Broadway stage soon after that, appearing with James Cagney in “Penny Arcade” in 1930. Both actors went to Hollywood to recreate their roles in the film version (“Sinners’ Holiday”), and both careers took off. She appeared in six more films with Cagney, most notable “The Public Enemy” in 1931. But they also did light comedy together that year, in “Other Men’s Women” and “Blonde Crazy,” and a musical, “Footlight Parade” in 1933, giving a rare opportunity to see Cagney dance.

In 1934, Hollywood adopted a Production Code intended to slam a lid on the sexual suggestiveness and other moral free-wheelingness that had given much life to motion pictures – but the films of the early ’thirties, often dubbed the pre-code era, were lively and intelligent. Warner Bros. produced the chief offenders, and they usually starred Blondell, teasing poor old Guy Kibbee in “Havana Widows,” teaming with Ginger Rogers while trying to keep custody of her child in “Broadway Bad,” helping Stuart Erwin find his place in Hollywood in “Make Me a Star,” (one of several versions of the Kaufman-Connelly play “Merton of the Movies”), and helping train Barbara Stanwyck (and fend off Clark Gable) in the melodramatic “Night Nurse.”She was teamed with yesterday’s profilee Allen Jenkins in “Three Men on a Horse,” where she’s a former dancer now dating racing enthusiast Sam Levene, for whom she’s been hocking her wardrobe. As she explains to Jenkins shortly after her entrance, “I took off more clothes for the horses than I ever did for the Shuberts.”She made something like 50 films while working for Warners throughout the 1930s. Even when the movie slumps into mediocrity, Blondell is good – and should have gotten more challenging roles. She eventually would realize that she was too easygoing about her career.Although much of her other work in the decade that followed dwindled into small supporting parts, she scored critical successes in “Nightmare Alley” with Tyrone Power and “A Tree Grows in Brooklyn.” And she got an Academy Award nomination – her only one – for Best Supporting Actress in 1951's “The Blue Veil.” 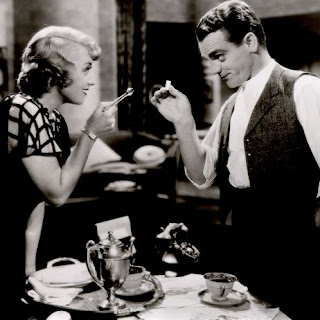 Like so many golden-age survivors, she made the transition to TV in the ’50s, but without leaving movies entirely behind, as parts in “Desk Set” and “Will Success Spoil Rock Hunter?” attest. Among her television credits are “Playhouse 90,” “The Untouchables,” “Death Valley Days,” and even ex-husband Dick Powell’s “Dick Powell Theater.” And she worked on into the ’70s, when you might have caught her, still the saucy wisecracker, in such shows as “Love, American Style,” “Medical Center,” “Starsky and Hutch,” and even “Fantasy Island.” Fittingly, one of her final big-screen appearances was in a nostalgic musical, 1978's “Grease,” where she played a benevolent waitress – completely in keeping with where you might have found her in a ’30s version of the story.