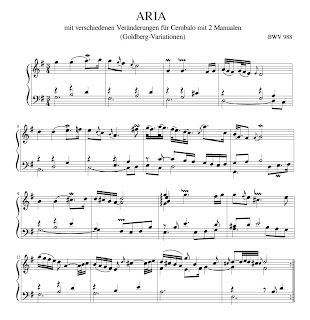 I'M TAKING A DAY off today, but that doesn't mean you have to. However, I offer some exciting entertainment -- what Duke Ellington (see yesterday's post) would refer to as "the latest thing."

It's a crowd-funded, open-source recording and score that you may mull over and pass around as you desire, and I can think of few pieces more deserving.

Bach's "Goldberg Variations" was published in 1741. It consists of a theme and 30 variations, and the story that erupted around it decades later suggested that the composer was given the theme by a keyboard prodigy named Johann Gottlieb Goldberg, who also may have given the work's premiere.

Modern scholars dispute this because, of course, that's their job.

Pianist Kimiko Ishizaka performs this new recording, which is available at the Open Goldberg Variations site. You can download the recording here, and the score, created by Werner Schweer, has been (and still is) subjected to much peer review. Which seems to amount to fine-tooth combing that which has been endlessly scrutinized, itself a fascinating idea, even if it suggests woodland beasts re-marking their territory.