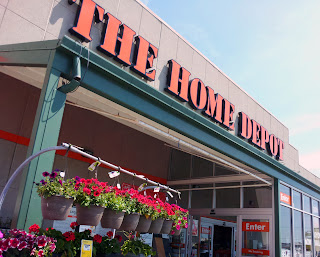 THE WEEKEND. The weather is nice. The house and grounds need upkeep. I need to buy supplies. The small, independent hardware stores have long since been ground into oblivion under the heel of the Brobdingnagian chains. The days of describing a project to a salesclerk and learning a few tips from an experienced hand are over.

What remains are the foot soldiers of the Moron Brigade. The folks to whom a job is a job and the paycheck rewards your endurance for showing up on time and putting in your hours. The stores themselves offer little training, and the employees have no incentive to learn.

And the customers – the sad, sorry, sonsabitches like me – are the liability. Because they have to interact with us, and we can be so damned annoying.

I had this conversation today:

“I’m looking for a pendant lamp that you’d use in a barn,” I explained.

“The kind that hangs down?” the sales drone queried.

“I don’t think we have those.”

“I bought some here a couple of weeks ago.”

I spotted them. “There they are.”

I knew this part would be brutal. “I actually don’t need any. I want to see if the escutcheon is deep enough to cover the mounting box, and I forgot to check the fixtures at home.”

Provoking the human equivalent of a slot-machine’s TILT penalty. The clerk’s eyeballs spun  freely for a couple of seconds before settling back into the never-never land where lights never shine. I knew it was horrible of me – I’d thrown the word “escutcheon” at him, and was mentally swamped.

“I’ve got what I need to know,” I told him, but he’d already gone into emotional retreat.

Honest, I’m not looking for genius-level intercourse. I don’t need a project expert with whom to discuss the job. I just ask for a person of reasonable intelligence with a little curiosity – but now I’m at the point of hoping that clerks-to-be don’t actually bring those qualities, because it sure as hell gets eaten away.

In truth, I have a friend who works for one such store who has managed to keep his F-A-C-U-L-T-I-E-S intact thanks to a very active creative life for which the job pays the bills. “You wouldn’t believe,” he told me, “what it’s like trying to hire people. This is supposed to be a time of high unemployment, but we just don’t have anyone worthwhile showing up.”

Which was confirmed today when I stopped at the store’s plumbing department and buttonholed a clerk who’d just hung up a phone.

“Calrods? You need someone from this department. I don’t work in plumbing.”

To his credit, he summoned the needed person, although he had to endure some kind of snarky sotto–voce comment from another worker for using the wrong intercom access code.

The plumbing guy appeared and I gave my request.

“Heaters that heat the hot water in your house.”

“Oh! Water heaters. You mean the elements that go inside them?’

And after all that, the store lacked the wattage-configuration combo I sought. “We can order them,” I was told, but I was too horrified by the prospect of a return visit to assent. But I’ll be back. That’s the one thing those bastards can count on. I’ll be back.