The Saga of the Longkill Diner

As a restaurant reviewer, I’ve seen places I praised suddenly close and places I hate soldier on, but I never had the experience that befell reviewer (and all-around fine writer) Vinny Chhabra late in 1981, when he did what we all love to do: stumble on a gem. Here are the two pieces that ran on successive weeks in the Albany Knickerbocker News, and then I’ll come back with some history. Here are Vinny's pieces.

IT’S EASY TO MISS, but keep your eyes peeled for a little green diner, behind a row of evergreens, right next door to a gas station, where Ushers and Longkill roads meet. It’s a diner, all right, but one like none other around. A haute diner.

Stuart deVoe bought Arlene’s Country Diner five months ago when Arlene decided to devote all her time to being a cook at the Saratoga County Jail. DeVoe had managed an inn in Greenwich, NY, before turning hair-stylist; but his interest remained in food. He catered parties, he followed Craig Claiborne religiously, he experimented with food, improvised.

“To build up business,” he offered inexpensive but classy dinners three evenings a week at the diner for around $4. It didn’t make him rich, but it attracted a lot of attention, especially from the people in the Van Patten developments close by.

DeVoe couldn’t keep up the pace, the 100-plus hours a week, so he cut out the dinners and concentrated on breakfast and lunch.

DeVoe’s blueberry pancakes were unusual, juicy and packed with a mellow flavor brought to its peak only with melted butter. The secret: The blueberries had been marinated in a mixture of semi-dry sherry and Calvados, that smooth and expensive apple brandy from Normandy.

The Longkill Omelet was another winner. The secret here was the complementing combination of minced onions and green pepper and Swiss cheese, all brought together with a pinch of marjoram. (It came with buttery toast. Coffee: 35 cents; second cup free.)

If you come across a better eggs Benedict, drop me a note. With casual expertise, deVoe simultaneously worked on several facets of the preparation: shallots and half-and-half went into making a delicate hollandaise variation; meanwhile, eggs were poached with just enough vinegar, the Virginia ham was sliced and being browned; English muffins were being toasted. All items were done within seconds of each other and appeared, steaming hot and aromatic, as one large, sumptuous serving of eggs Benedict, at a very good price.

DeVoe serves, what he calls, regular diner fare, too. “It’s not all items that appeal to the more selective person.

“The menu varies, depending on what I can get fresh,” deVoe said Thursday. “For example, I was serving crepes with fresh strawberries and mandarin oranges when strawberries were in season. Nothing’s frozen or out of a can here. For lunch today I’m offering my chili – they say it’s really good; it gives you a kick, but not an overpowering one. I make it with beer.”

THE LONGKILL DINER, Longkill Road (at Ushers Road), 1½ miles from Northway Exit 10, Jonesville. Tel: 877-7098. Open for breakfast and lunch only, “from about 6 am. to 4 or 5 p.m.,” Monday through Saturday. Closed Sunday. No reservations, no credit cards.

THE CALLER MUMBLED SOMETHING about my probably not having both oars in the water and hung up with: “We just ordered the eggs Benedict you raved about and the woman here tells us if we’re looking for fancy things like that we should head on down to the Concord!”

Not so, I realized by noon. Similar calls kept coming. “All I did was order the things you mentioned in your review,” moaned a woman, “and the cook looked at me as if I had asked she fork over her firstborn. Something unusual . . . ”

Unusual is right. And thus, this postscript to last week’s review of The Longkill Diner.

Allow me to backtrack. After being told The Longkill Diner was the best-kept 5-month-old secret around – a place serving haute fare at diner prices – we visited it Oct. 28. Stuart deVoe, who said he had bought the diner from Arlene Riddle last spring, was praised for his herby Longkill Omelet and the pancakes he made with blueberries marinated in sherry and Calvados. We also asked anyone who knew of a place serving better eggs Benedict to drop us a line.

Oct. 29, a day before the review appeared, we Interviewed deVoe. He said he had bought the former Arlene’s Country Diner from Arlene Riddle last May and renamed it The Longkill Diner as part of its new image. Mrs. Riddle, he explained, had decided to sell out and devote all her time to being a cook at the Saratoga County Jail.

“Customers with selective palates” were trooping in, deVoe added, and clamoring for his recipes, urging that he expand his menu. He said he would oblige; a parade of gourmet dishes at budget prices were on his agenda.

Two days later, deVoe quit. Monday, he had a new job, managing a beauty parlor in Albany. “I’m sorry,” he said when contacted Tuesday. “Actually, I hadn’t really bought the diner; I had leased it with an option, the intention, to buy. But I was getting deeper and deeper and deeper in debt. I couldn’t give any more.” And so, he bailed out.

Arlene Riddle says she opened the diner Monday, unaware that it had been recommended by Dining Out on Friday. “I open this place and, no kidding, there were between 50 and 60 people here. They weren’t ordering eggs and toast, but fancy things like blueberries sauteed in wine, eggs with fancy names, chili made with beer. I told them I didn’t know what the hell was going on and that deVoe had walked out leaving me a pile of dirty dishes. Most of them thought it was amusing, but many people got mad as hell. This one woman threw a tantrum in here and called me a very dirty name. I tell you, I could have used some of that wine this guy used to sautée his eggs in. Finally we had to put a ‘Closed’ sign on the door . . . ”

The confusion was tapering off Wednesday. Arlene Riddle said the short-lived Longkill Diner was back to being an old-fashioned diner again, and that the new sign, Arlene’s Country Diner, would go up as soon as possible.

Wednesday, she had 23 items on the menu, with ham-and-cheese omelet as the most unusual for breakfast. Breakfast prices were in the 99-cents to $1.50-breakfast range. And chili was a feature for lunch. “My own, old-fashioned chili,” Mrs. Riddle explained. “I don’t throw no six-pack of beer in it.”

The diner is back to where it was six months ago, in name, prices and fare, Mrs. Riddle added. “This is a run-of-the-mill diner again.”

But, perhaps, not for too long. Mrs. Riddle added she was going to hire a chef. “I’m not sure what he’ll come up with; maybe some light dishes and things like that. We’ll just wait and see.”

Meanwhile, please do me a favor. The next time you come across a place serving gourmet food at diner prices, don’t tell me about it. 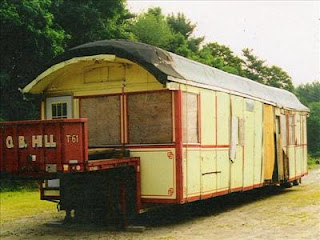 The eatery in question started life in about 1939, a classic 40 feet by 10 feet railroad-car diner built by J. B. Judkins Co. of Merrimac, Mass., with porcelain and mahogany and stainless steel in its cozy interior. It spent about 25 years in Albany, possibly on Tivoli Street and possibly as Morris Lunch on James Street. In 1965, it traveled to a spot on Jonesville’s Longkill Road, across from Ushers Road.

It was Bev’s and Flo’s before it became Arlene’s – and, briefly, the Longkill Diner – and it passed from Riddle to her daughter-in-law, Sue Gailor, in 1988. She ran it as the Olde Jonesville Diner. It closed for good early in 1996, and ownership passed to Congress Gas and Oil, which sold it to a man in West Roxbury, Mass., who moved it to his town with plans to restore it and open it there. Local opposition killed the project, and the decaying structure went to putative restorer in 1998 before ending up in pieces somewhere in Chicago.

On its former site in Jonesville a Stewart’s now stands.
Posted by B. A. Nilsson at 1:47 AM