Vintage Stuff Dept.: In late 1985, I was settling in as one of the Albany-area arts-writing hacks. I made my debut in the Schenectady Gazette in March, 1983, began writing for Metroland Magazine a year later, and soon added Albany's Knickerbocker News to my roster, which provoked a wee scandal I'll write about in the coming days. In December 1985 a glossy magazine called Capital Region appeared, brainchild of Metroland founder Peter Iselin. I wrote some features and food pieces for the short-lived publication, and for its second issue, I asked four area restaurant critics about their gustatory New Year's resolutions – little knowing that I'd join their ranks in a mere few months. The photo, by Bill Murphy, was taken in his Albany studio, and assembled the quartet in question to sample the stuff they'd pledged to avoid. I prepared and styled the dishes and, yes, that's me serving them.

IF FOOD IS ONE of the last things you consider when charting your New Year’s resolutions, you’re paying tribute to that staunchest of internal organs, the stomach. With a language all its own, it tries to guide us through a maze of dietary offerings that must be unrivaled in history for wretchedness. The American diet is designed almost solely for mouth appeal and has caused the mouth and stomach to become enemies. The mouth may win as far as choice of food is concerned, but it’s the stomach that will get you in the end.

My wife and I have a dessert technique that dresses up our craving for sweets as something romantic: “Should we?” I ask, surveying a listing that already has the stomach preparing to do battle. “Oh, I don’t think so,” she says, but adds, “that ‘Slice o’ Heaven Pie’ sure sounds good.” “If I were going to have dessert,” I say cleverly, “I’d probably go for the ‘18-Layer Cake.’” And then we both ask the ceiling, “How long has it been since we had dessert?” (overlooking last week’s binge at Ben & Jerry’s) and, when the items arrive, hold hands while digging in as if to tell the world that ours is a gluttony inspired by love.

Last year I resolved to shave a few inches off my burgeoning gut and did so by eliminating the four all-American food groups from my diet: salt, sugar, butter and fatty meat. My kitchen now has become a (weak) fortress against these items, which seem to slip in with every bag of groceries. Also necessary was a retraining of my palate: once you knock off salt, for instance, everything tastes bland for a few weeks. When you readjust, however, you can discover the subtle joys of fines herbes, among other things.

During the year I became more aware of the crimes visited upon the public by restaurant people who don’t know any better: chefs whose soup of the day is, when you get right down to it, cream of salt; salad bars that feature Jell-O and Cool Whip among the bland greens; waiters who can’t open a bottle of wine without making it seem like a decathlon event. Short of resolving never again to dine out, which would deny me a too-favorite pastime, I have a few changes in mind that will govern the selection of an eatery and how I shall treat my stomach once I get there.

I also asked some people in our area who write about food what their New Year’s resolutions might be; curiously, all of their statements had to do with restaurants.

For myself, I think I’ve all but given up on salad bars. My first experience with this atrocity occurred in the Connecticut town where I grew up, when The Hungry Knight opened with a menu of steaks, chicken, potatoes and the table of greens. It was the first time I was ever asked to get up after having been seated in a restaurant. “And when I see you go up for your salad,” the waiter explained, “I’ll tell the chef to put your steak on the fire.” At which point he dramatically added a statement that sounded too good to be true: “And you can go for salad as often as you want!”

Which I did. I wasn’t getting my money’s worth unless I made two or three trips across the room, in spite of the phenomenon I was taught when waiting on tables myself: Fill ’em up with salad, the chef would say. Lettuce is cheap and they’ll leave thinking they got a big meal.

That tactile experience of snagging the clumps of iceberg was part of the fun, so much of the pleasure was lost when health regulations imposed a plexiglass screen on the setup. A somewhat medicinal feel was added, putting me in mind of doctors working with robot arms in a germ-free room.

There has also always been the problem that dining out, like being married, is something that we are not taught to do. But should be. We’re born with some basic eating urges, but how do you learn to eat an artichoke? Dining is, or can be, a civilized ritual, and much of its success depends on the poor wretch who waits on you.

Too many waiters and waitresses now depend on the “Hi, I’m Pat!” approach, as if to suggest that familiarity will make up for a lack of good training. They’re inhibited by the fact that we don’t look upon them as the craftsmen they could be: a journeyman waiter should guide you course by course through what is now often risibly termed your “dining experience.” More often, all they do is schlep. Much too quickly. Or send you to the salad bar to do their work, which by rights should include keeping your table free of such garbage as mushy three-bean salad or hunks of cabbage swimming in sugary mayonnaise.

Resolution: I go out to eat to eat, not to work, so from now on my salad gets assembled in the kitchen. And I’m tired of the lack of class shown in a place that charges more for blue cheese dressing, or, worse, spells it “bleu cheese,” a pretension I detest. 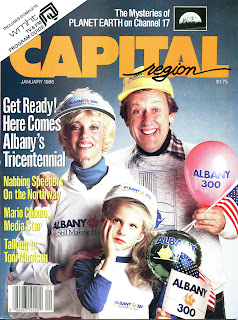 “I’M NO LONGER GOING to eat in any place where the decor primarily consists of ferns,” says Doug de Lisle of the Troy Times Record. “And my life would not be diminished if I never had fried mozzarella again.” He acknowledged the monkey-see, monkey-do characteristic of the more insecure restaurant operators, who will grab anyone else’s new idea and work it to death in a given area. “Finger food as the focus of the cuisine is not very attractive,” he concludes, “and I’ve had enough of nouvelle cuisine.”

There are many who point the do-better finger at food critics – “If you’re so smart . . . ,” the accusations begin – but de Lisle prefers to function only as a guiding hand. “If I were a restaurant owner,” he says, “I’d open a Mexican restaurant that served authentic Mexican food and not the bland Tex-Mex-by-way-of-California stuff you get around here.”

“There is a place in Albany that is serving pasta with chocolate sauce! But I knew I’d had it with pasta after I judged a contest in which someone prepared pasta with applesauce.

“It’s a good deal for the restaurants, of course,” Chhabra continues. “You have a portion of pasta that probably costs you about 80 cents and you dress it up and sell it for $8.

“Now everyone seems to be into stuffed pasta, like tortellini. I’ve tried it. There’s some dried cheese inside and it tasted like you’re chewing sawdust.

“Forget pasta. Goat cheese is the coming thing, and that’s what I’m going to write about. American, not French. Keep an eye on it.”

Peg Churchill Wright, at the Schenectady Gazette, sounds a more solemn note. “I’ve resolved to be kinder to my stomach,” says she, “primarily by avoiding fast food. I’m tired of plastic food that masquerades as the real thing. I’m going to spend more time appreciating fine restaurant food, although that is getting to be a rare thing.

“I’ve also resolved to do everything in my power to discourage the use of microwave ovens. No single kitchen appliance has perpetrated more abuses upon the stomach.” She let slip a rumor that she is going to discover and expose all the microwave ovens now in use in restaurant kitchens and send the abashed chefs back to their skillets, but that rumor is as yet unconfirmed.

Finally, an ominous note from Captain Dinner Date himself, the Albany Times Union’s Fred LeBrun. “No more Mister Nice Guy,” he declares. “The gloves are off.” This may be the year the critics heed the cries of the stomach and bite the hands that sometimes so badly feed them. LeBrun goes on to say that “it would be nice if someone in the restaurant business locally would show a little originality. And if I see one more ‘lite menu’ I’m going to light it up!”

“Furthermore,” concludes LeBrun, “this year I’ve resolved to give gin a chance.”