I'm happy to note that, in the two years since this was published, several big-box department stores with food departments, such as Target and BJs Wholesale Club, have joined the program described below. Wal-Mart remains a holdout, however, and continues to deny that it's due to the store's reluctance to deal with unionized truckers. 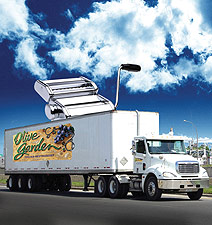 NEXT TIME YOU SEE a Consolidated Foodworld truck at Applebee’s, Ruby Tuesday, or any of several other chain restaurants, study the vehicle’s sides and roof. New models are sporting a complicated array of solar panels and plexiglass windows sturdy enough to withstand speed and the elements, but transparent enough for a novel use of the greenhouse effect.

“We’re big fans here of the ‘locavore’ movement,” says Consolidated Foodworld spokesman Doug Tisch, “and we’re pleased to have come up with a way to apply it to our nationwide families of restaurants. The Albany area is home to many successful units, so it’s one of several key markets we’ve chosen in which to test market this idea.”

Rather than serving only as delivery conduits for the restaurant’s produce, the new trucks have been fashioned into rolling gardens equipped with multi-level growing areas and a computer-based hygrometer and light-monitoring system that allows the driver to keep constant tabs on the state of his cargo.

We inspected a prototype truck in the parking lot of the Latham Applebee’s. Tisch, who started with the company as a nutrition planner before moving into PR, led me up a ramp and down the very narrow aisle separating rows of growing areas spaced like old Pullman berths – but with the unusual addition of sunlight.

“We’re delivering a fresh crop of romaine,” he said, indicating several rows of newly-shorn beds. “Tim, the driver, harvests it with the help of specially trained restaurant staff at each location. This is traditional, soil-grown lettuce, which will give Tim a second growth in a little over two months, by which time he’ll be back to this location. That helps foster the sense of a truly local product.”

Crowded ranks of bell peppers and broccoli on the other side of the aisle were set in hydroponic tanks. “Obviously, the big problem here is spillage,” said Tisch, “which we’ve contained in two ways. The tanks themselves are fitted with vertical baffles, like ice trays, and we’ve made the liquid itself more viscous, so it’s the consistency of honey.

“Using both liquid and solid growing beds also allows us to extend our new waste recycling program. Each restaurant unit is being fitted with a compost station that generates fertilizer in both forms, so the driver is able to refresh the beds at every stop.”

Although a sizeable amount of the restaurant’s vegetable demand can be met this way, some items remain elusive. “Onions and garlic need those cold-weather months,” said Tisch, “and tomatoes would take over all the truck space.”

Timothy Woczek has been driving for the company for over a dozen years, and shares Tisch’s excitement. “My wife and I have a garden at home,” says the California native, “so we’re used to eating pretty fresh. Plus, she went through and changed all the light bulbs in the house, so we’ve been trying to do our share to live, you know, green.”

Does this new approach add too much extra work to a job already budget-burdened? “It’s a good cause,” Woczek says, “and there’s supposed to be some more money coming down the pike.”

“We’re negotiating with the UTU (United Transportation Union),” Tisch explained. “They’re not against the idea on principal, but we still have to hammer out a compensation plan that works for everyone. For now, we’re on a provisional, experimental contract.”

The truck itself is one of the new hybrid semi-trailers produced by a collaboration between Peterbilt and Eaton. “Fuel efficiency increases by about 25 percent,” said Tisch, “and we’re running a regenerative braking system that not only returns power to the engine but also helps run the trailer’s grow-light system.”

Testing is expected to continue for another six months. Assuming a success, “we’ll be rolling this out nationwide in time to provide truck-fresh veggies as the outdoor growing season winds down. That’s another selling point: year-round freshness.

“You’ll see this in our trade ads this fall, too. We’re changing the company name to ConFoods. Our creative department has developed a corporate mascot character called Larry Locavore, who looks like a big green pepper,” Tisch says with a laugh, “and we’ll be using him in an online video promotion campaign. We’ve even got Ed Begley, Jr., signed to do the voice.”

Not surprisingly, some of the chain restaurants are looking to get into the act as well. Olive Garden, for example, has plans to introduce what they’re calling Fleet Pasta-ria, putting a complete pasta-making operation in a semi-trailer, from grinding mill to dough rollers, and featuring parking-lot fettuccine production events. TGI Friday’s has a fleet of that they’re calling Party Machines set to roll this summer, featuring a distillery fashioning beverages from truck-grown berries.

“Depending on the success of this phase, ConFoods plans to go in even more innovative directions,” Tisch said. “For instance, why not meat and poultry? We envision taking the cattle-car concept and turning it into a more humane space in which the animals are grown in as accommodating an environment as you can get in a nine-by-53-foot room. Localizing the abattoirs will be tricky, though, because each state has different regulations, New York’s being some of the toughest.”

Still to be harvested on Woczek’s truck were upper-berth rows of eggplant, parsley and more lettuce. “We’re heading to Boston next,” said Tisch, “where we already faced a more difficult challenge. We sent one of our new rolling aquarium trucks there last week, and a mob we suspect was organized by Legal Seafood broke into it overnight and dumped all our fish into the bay.”