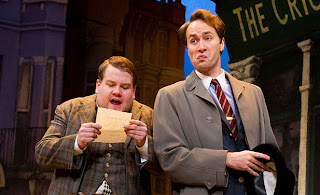 TRUE TO ITS commedia dell’arte roots, Richard Bean’s “One Man, Two Guv’nors” plays fast and loose with the theater’s fourth wall. That wall – the imaginary boundary between audience and players – is itself a 19th-century conceit, but so firmly rooted that unless you grew up with the likes of British pantomime, it’s a surprise when one of the actors fully engages the spectators.

Carlo Goldoni’s 1746 classic “The Servant of Two Masters” is Bean’s basis, borrowing an absurd-from-the-start situation in which hapless Francis Henshall finds himself not only doubly employed, but working for a pair of on-the-lam lovers, neither of whom knows the other is in Brighton.

Produced by the National Theatre of Great Britain, and movie-theater broadcast last year as part of its NT Live series, the play was such a hit that it transferred to London’s West End, and is currently in previews on Broadway with most of its British cast intact.

Which means that we have the pleasure of seeing James Corden give the comic performance of a lifetime as the wily servant.

Having seen both the broadcast and a recent preview, I’m impressed at how easily the show is settling into its American environment. Jokes about cricketers and Margate and Margaret Thatcher survived the crossing, and the cast has long since worked up an easy familiarity with one another and the material.

The fourth wall breach begins, properly, at the top of the show, when world-wise secretary Dolly (Suzie Toase) steps out of the action to confide some opinions to the house. Technically, it could be that gentler breach that’s called an “aside,” but this is no hand-to-the-side-of-the-mouth kind of statement. She wants us to appreciate the state of women in the “now” of the play, which is 1963.

Having thus set us up for such interruptions, she delivers the play into Corden’s hands, and by scene two we learn that his principal motivation is hunger. He’ll take any job in order to raise a few bob for a snack, which he proves not only by taking on the extra guv’nor but also doing terrible things to (and discovering terrible things about) an array of not-quite-empty beverage mugs. 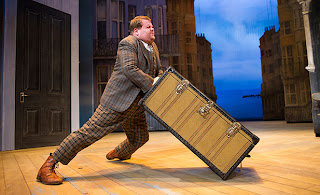 He calls for a sandwich. “I’m serious,” he says plaintively, and in the preview he was startled by a package that flew from the audience onto the stage: a homemade sandwich, brought by a British fan familiar with the play, who didn’t startle the actor enough to prevent a hilarious ad-libbed exchange.

Needing extra hands to move a heavy trunk, Corden drags a pair of front-row attendees onto the stage with him, and if you think it’s a set-up, read the disgruntled reflections of Sir Max Hastings after he was euchred into participating.

Like so many aspects of the show, the gag is whipped to a gallop and brought to a point that risks betraying the audience’s sense of trust. I can’t say I thought for a moment that trust might be an issue at all until I was launched into the intermission. And it’s a much-needed break, because the ride to the first half’s end turns dizzying, complete with the most dazzling an unexpected pratfall (of sorts) I’ve ever seen on stage.

Were our fourth-wall expectations unduly toyed with? To go into any more detail risks spoiling a small part of the show – but what about other expectations? The stock commedia characters are creatures of predictable behavior – that’s part of their fun – but Bean has given a few extra spins here and there.

Although the era and location have whiffs of down-market exoticism, there’s a special timelessness about the archetypal characters and situations portrayed. Henshall is Harlequin, gluttonous and easily confused. He’s also supposed to be quite nimble, as you’ll see from the cartwheel he at one point performs, a gag that’s paid off with red ribbons around it.

Columbina becomes Dolly, of the secretary variety of servant. Her know-it-all quality could seem unromantic – but it’s the ’60s, she’s hungry for a man, and Henshall will do if he doesn’t overdo it. 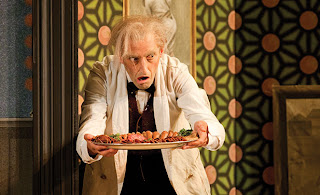 The stingy Pantalone endures into every overbearing boss of sitcom cliché, although here he’s small-time hood Charlie Clench, in need of quick cash to pay off a mobster. Actor Fred Ridgeway all but channels Sidney James from the “Carry On” movies. And in this incarnation, the Latin-spewing Dottore becomes Clench’s attorney, Dangle (Martyn Ellis, who also strums a mean ukulele).

Rather than keeping the lovers (gli innamorati) purely stock, they’re exaggerated into their own archetypes, so that Charlie’s daughter Pauline (Claire Lams) pines for her beloved with a singular dimness, frequently wailing “I don’t understand!” as the plot boils around her. And that beloved, Alan (Daniel Rigby) is a would-be actor, an arm-flailing master of The Art of Coarse Acting.


If we find it incredible that at least one of the two titular guv’nors is a murderer, it’s not going to get in the way of some splendid characterizations. Jemima Rooper appears as villainous Roscoe Crabbe, supposedly dead. Actually dead, we discover, and it’s his sister Rachel in a disguise that looks embarrassingly like Ringo Starr. We’ll call him/her Pedrolino, and marvel at Rooper’s sudden changes.

Is Stanley Stubbers the Scaramouche of the show? He has an upper-class accent and a public-schoolboy manner, and is given to sudden non sequitur exclamations. Oliver Chris gives Corden a run for his money in the comic-timing department, and even if what looked like ad libs and suppressed actor-laughter between the two of them in the NY Live broadcast was repeated almost exactly on the New York stage, it’s just a testament to how accomplished they are. (It’s the Grand Marnier spill. You’ll know it when you see it.)

There’s a skiffle band playing as you settle into your seat, and music pervades the evening. There’s the world’s oldest waiter (the incredible Tom Edden). There’s an improbable resolution, but that’s where tricky lawyers come in handy. So, yes, my expectations were toyed with, but I guess I’m ready to forgive Corden & Company. It's too much fun. 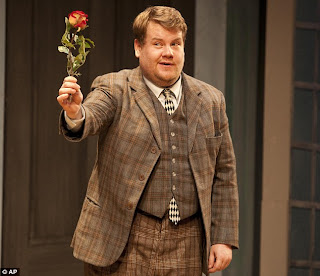