A Heritage in West Virginia

Across the U.S.A. Dept.: Late in 1989, my wife and I piloted a VW camper from Schenectady to California and back, and I sent back a couple of dozen Ernie Pyle-inspired dispatches that ran in the Schenectady Gazette. On the way back, we stopped to visit my some of my West Virginia cousins and found ourselves in the midst of the Pittston strike. 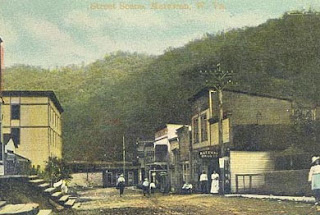 THE SIGNS IN NEARBY Williamson tell you you're In the Heart of the Billion-Dollar Coal Field, but you don't need signs to tell you what's king around here. Route 52, which takes you through that city, parallels the train tracks. You pass a yard in which endless combines of coal-filled cars sit on the 24 sets of tracks.

There are no dry valleys in this area. The high mountains meet at stream-filled crevices. The roads are etched into the hillsides. As you round a hairpin curve there's a good chance you'll meet a coal-filled dumptruck coming the other way.

Sixty-eight years ago a Williamson jury acquitted Matewan sheriff Sid Hatfield and a crew of union miners of charges that they murdered a group of Baldwin-Felts detectives. These detectives were nothing more than hired thugs sent by the Stone Mountain Mining Company to turn striking miners out of company-owned houses. Matewan is over in the next hollow (pronounced “holler”), near Pigeon Creek and Red Jacket and Varney, but Williamson is the seat of justice for Mingo County.

At the end of September nights begin to get cold again. The United Mine Workers were out on strike, but you'd never have known it to read the papers everywhere else in the country.

Strike shacks faced the mine entrances and the UMW faithful mingled among the folding chairs, card tables and coffee pots. Hand-lettered signs reminded us of their battle. It was a job action called in sympathy with the miners who work for Pittston.

That company, with headquarters in blindingly white Greenwich, Conn., was well-off enough to keep the mines working with scab labor. Other companies took advantage of high local unemployment and the spreading lack of sympathy for labor unions to get scabs on the payroll – or lure strikers off the picket lines.

You could see the picket signs leaning on the front porches of houses, too, small houses packed together densely on the hillsides. They're not company houses any more, so chances are there won't be another Sid Hatfield joining strikers in a showdown.

Speaking of Hatfields, the Williamson Daily News just put out a commemorative edition celebrating the country's best-known feud. And in nearby Matewan you can study a plaque that signifies the decades of bloodshed that followed the 1882 election day wounding of Ellison Hatfield by three of Randall McCoy's sons, who were themselves killed by their arresting officers – a pair of Hatfields – after Ellison succumbed.

Most legends attribute the start of the bad blood to a misunderstanding over a hog; others more romantically attribute it to an ill-fated romance between Johnse Hatfield and Roseanna McCoy.

But the area isn't eager to capitalize on its bloody history, at least not any more than already has been done. Matewan's feud-commemorative marker isn't too far from the plaque that stands at the site of the 1920 coal-miners massacre, and that's about it. At an event marking the 69th anniversary of the Matewan Massacre, author Lon Savage argued that Matewan and the surrounding area should wake up to its own tourist-attraction potential:

“These are things, people and events of tremendous interest to all the people of America,” he said. “The Matewan area has even more to brag about than it realizes.” He compared it to the much better known story of the showdown at the OK Corral, which Tombstone, Arizona commemorates with eight museums, three tourist saloons and, of course, the Boot Hill Cemetery, where the famous shootout is reenacted every Sunday.

Why doesn't Matewan cultivate its tourist-attractive history? “One reason is that Appalachian coal mining doesn't enjoy the favorable image that the Wild West has,” said Savage. “The Wild West, with its violence, is beloved by Americans and the people the world over. Appalachian coal mining, with its violence, does not have that image. Another reason is that the people in Arizona have decided that in their fight, the Earp brothers were the good guys and the Clantons were the bad guys. In West Virginia, we're not sure who were the good guys and who were the bad guys, and if you even raise that question you might start the fight all over again.”

He concluded that it's also because West Virginians don't appreciate their history and rarely share it. This isn't altogether true: my observation is that the people in the Matewan area find their history unremarkable. They're surprised at your interest in it.

When filmmaker John Sayles was hitchhiking through this area many years ago, he heard stories about the Matewan massacre and eventually returned to make a movie about it. It's titled Matewan, and does justice to Savage's Wild West comparison. It also tells a story all the more compelling for the truth behind it.

My mother grew up in Pigeon Creek and went to high school in Matewan, but I never heard about the massacre until my grandmother recounted it one day about five years ago. And she only thought to tell it because I pressed her for some mining stories I hadn't heard before.

I also learned that my family has ties to the Hatfields, but that's hardly uncommon in the area. Hatfield, McCoy, Justice – a look in a current phone book lists page after page of these surnames. My mother's family, more Justice than Hatfield, stayed away from the feud. They also were lucky enough to stay out of the mines, although I have cousins who are now involved underground.

Those tunnels stretch deep – miles – below the earth's surface. You descend in an elevator for what seems like a week. It's not the scary-exciting ride you get at a tourist site like Howe's Cavern. This one is simply scary. The walls around your cage are jagged from blasting. When you hit bottom you are as remote from the world as if you were orbiting it. A slight geological hiccup and you're gone.

A train system of low cars carries people to the far reaches of the tunnel fingers and returns with tons of coal, rock that has been chipped or exploded from the walls. This is a precise, numbing job that exemplifies more than any other occupation the gulf between bosses and workers: the faster the stuff is hauled out, the more profitable it is. And the more dangerous. And there's no compromise in the mines: you endure or you die.

It gives the sight of those striking miners all the more poignancy. These are people with a tradition of terseness, people who would just as soon not call too much attention to themselves. But out in the chilly autumn days and nights, walking the picket line, they're forced to ask for all the attention they can get.

it is a very interesting and informative article. I think I will add your site to my favorites.