DICK CAVETT HAS A piece in today’s New York Times reflecting on the 1972 Carnegie Hall performance by Groucho Marx. Cavett, who was host of a TV talk show at the time, introduced Groucho that evening, and he discourses about what terrible physical shape the comedian was in and the mediocre performance it led to.

Writes Cavett: “His performance consisted mostly of an unenergetic reading of his favorite anecdotes from three-by-five cards; a thing I feared might turn even that audience to stone.

“But a sort of miracle took place. They were so pre-sold to have the time of their lives that they barely seemed to notice any difference between the all-but-drained Groucho onstage and the capering madman of the movies. And, as an actor still susceptible to a booming audience, mercifully he did ‘come up’ a lot.”

I’d like to say that Cavett is dead wrong, that Groucho fully rallied to the occasion and turned in a stunner of a show. But he didn’t. I had a sixth-row parquet seat, in a sold-out house that had a mix of the scruffy and illustrious, and saw an frail 82-year-old guy go through a halting sequence of stories and songs.

I’m guessing that many in the house shared my awe at witnessing this event, but it nevertheless would have been tragic had the performance been abjectly awful. But it wasn’t that, either. Cavett describes him as an “all-but-drained Groucho,” which is a terrible exaggeration. Trouble is, a piece like Cavett’s column will plant itself as a definitive description of the event – but, like so many of his NY Times columns, it’s just another essay in the endless self-congratulation that marks the man. His talk show was promoted to the intellectuals manqué (his twee theme song, copped from Candide, underscored that), and generally sported a rarefied guest list.

You could tune in and see Noël Coward or Orson Welles or, yes, Groucho, but you’d end up yelling at the TV set, screaming for Cavett to stop talking about himself and let the guest get a word in. He made Jack Paar look modest.

When Groucho guested in 1969, it might have been a warm-up for the Carnegie Hall event. True, Marx was more on his game, but age certainly had caught up with him.

Much of the debate about Groucho’s final years concerns a woman named Erin Fleming, who became his live-in girlfriend, nurse, and, it seems, muse, pushing the old man into public events he otherwise might not have pursued. That she was a nutcase is public record, and it’s discussed fully (and heartbreakingly) in Steve Stoliar’s book Raised Eyebrows. Stoliar worked for Groucho during those years, and witnessed plenty. It’s a must for any Marx fan.

(The high point of Fleming’s career came with an appearance in Woody Allen’s 1972 movie “Everything You Always Wanted to Know about Sex but Were Afraid to Ask,” in which she appeared in the final sequence in a relentless close-up as we learn what happens to a man during ejaculation.) 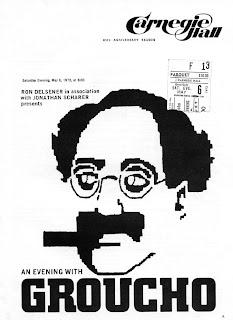 But she was instrumental in getting him on the stage of Carnegie Hall, and that remains to her credit. The comedian was lonely and depressed and must have been awed by the reception he got that night.

What’s billed, at the opening, as a violin solo cost the world a violin, and it set a tone for an irreverent evening. We were supposed to see a film clip – the Stateroom Sequence from “A Night at the Opera” – after intermission, but the equipment didn’t function properly. Groucho soldiered on.

Cavett tosses him this bone: “. . . as an actor still susceptible to a booming audience, mercifully he did ‘come up’ a lot.” He “came up,” all right. He was a trouper. He paid his dues during a grueling vaudeville apprenticeship.

It’s difficult for a person to rise above the top edge of whatever intellect and creativity that person may possess. Mediocre actors, for example, tend to lack the capacity for self-reflection that could prompt improvement. Dick Cavett made his Broadway debut in August, 1977, replacing Tom Courtenay in Simon Gray’s “Otherwise Engaged.” Courtenay/Cavett played Simon Hench, a complicated character whose seeming generosity masks a strident self-involvement that gradually is revealed.

Courtenay meted out that revelation with a virtuoso technique, drawing you in with boyish likeability, then subtly but ineluctably stripping down to the bastard beneath. Cavett lumbered through the part with constant look-at-me-I’m-acting self-consciousness. 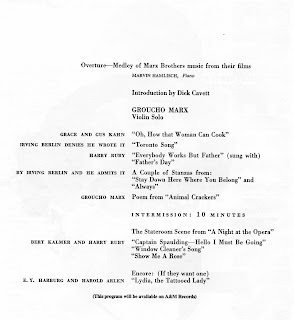 Shortly after Cavett took over, actor John Horton bailed in despair, allowing a friend of mine, Michael Connolly, to take over his part. Connolly was an understudy throughout the run, but this marked his Broadway debut, so I wrote a piece for our hometown newspaper, the Ridgefield (Conn.) Press, and took the photo you see here. Unfortunately for Michael, Cavett closed the show within two months.

But let’s let the self-never-effacing Cavett tell you about himself himself. Here’s more from the NY Times piece, describing Groucho’s night at Carnegie Hall: “The evening also provided, for me, one of what I call ‘through the looking glass’ incidents. It could also be called, ‘How did I, specifically, get here?’ It’s kind of corny to talk about it, and some doubt the genuineness of the feeling as merely an opportunity to drop a name or two. It’s the feeling of: how did I ever manage to get from being a kid seeing Groucho on the screen of the Grand movie theater in Grand Island, Neb., to now being in the back seat of a long black car with him? (If you know, please provide the answer.)”

And there you have the sad consequence of the relentless pursuit of names to drop. Me? I’m dropping the subject.
Posted by B. A. Nilsson at 4:06 PM