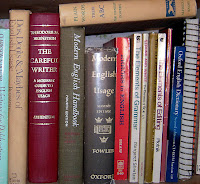 “You have no idea what it’s like to be a ‘just between you and me’ person in a ‘just between you and I’ world.” This is a corner-of-the-barroom confession from a New Yorker cartoon by William Haefeli. It hangs in my office. It reminds me, as I write, to use the tools – the language and its rules – to the best of my ability so that I’m communicating as effectively as I can. The fact that what I’m seeing is a cartoon also reminds me to have fun, which the shrewd use of language invites.

In the January 2 edition of The Globe and Mail, Toronto’s Diane Amato has an essay titled “I’m a Stickler for Proper Grammar.” It’s an amusing, insightful 900 words explaining the nuts-and-bolts tightrope writers tread.

“Don’t get me wrong,” Amato writes. “I’m not a perfectionist, a language snob or even a high-school teacher. I’m not too hung up on the proper use of semicolons and commas, or whether one should ever start a sentence with ‘and’ or ‘but.’”

Then, continuing with just the right measure of self-effacing charm, she describes the challenge of steering her two children, aged three and five, through grammar’s challenging jungle.

She further confesses, “I’m so deep in the grammar zone these days that when I hear adults make similar mistakes, I have to bite my tongue or walk away to keep from correcting them as well.”

There’s the age-old clash between intelligence and judgment. We’d like to help the mis-speaker avoid making errors that impede effective communication – and could hinder professional advancement – yet such a correction is too often perceived as a threat.

“Correcting one's own grammar is admirable. Correcting that of others is reprehensible,” wrote one responder to Amato’s piece. It brought the grumps out in force. Of the 62 comments posted as I write this, only about 25 could be taken as supportive – and even many of those were fairly wishy-washy.

“Grammatical errors give me the 'fingernails on the chalkboard' feeling, and tend to distract from whatever is being said,” wrote one supporter, but more common were such responses as, “So help me, people like this bore the pants off me”; “This writer would also do well to remember that maybe she is not the goddess of grammar that she thinks she is”; and “Grammar ain’t as important as the message. :),” rendered with an asinine emoticon as if to mollify its ignorance through cuteness.

The most hilarious comment was the first one posted: “You are aware of the infant mortality rate in Mali aren't you? How about the rate of tuberculosis on First Nations Reserves in Canada? Hmmm priorities.” As if Amato should drop her netbook and rush to Africa.

A blogger named Geoffrey Brittan took delight in picking solecisms out of the Amato piece, although many of what he identified as errors were merely stylistic choices. “Diane's article was written deliberately to sound conversational and light,” he concluded, the word “deliberately” giving the sentence a bit of a snarl. “The tone is superficial, because an intense discussion might offend readers who might think she is a grammar snob.  This is worse than engaging in a Marxian class struggle; it's fear of it.”

Class struggle has become an election-season cry in the U.S. from those who feel threatened by reasoned, fact-based arguments, and who play the Marx card to help equate intelligence with liberalism, and therefore evil.

But Brittan falls into the trap of all who huff and puff about mistakes in another’s prose. He wrote, “Just about anyone who graduated high-school in the 80’s is unable to structure a sentence, punctuate, or follow proper grammatical usage.  A few, like Diane, can be found in Journalism.” Despite common mis-usage, one graduates from a school. “High school” only gets a hyphen if it’s used in an adjectival sense. “Journalism,” at the end of a sentence, describing the profession, isn’t capitalized. And it’s patronizing to refer to Amato by her first name.

Someone shrewder than I no doubt can mine this piece for errors, and I’m happy to hear about them. I can defend stylistic choices – I like beginning sentences with “and” and “but,” I split infinitives, I litter my prose with multi-hyphened coinages, and I’ve a weakness for the sesquipedalian – but I’ve learned much from my betters. Including this: