Through the Silence: Cage and Beyond

From the Vault: 2012 marks the 60th anniversary of John Cage's 4'33", and I feel the need this quiet morning to heighten my awareness of these pleasant surroundings. Here's a decade-old review I wrote for the sadly defunct andante.com about a significant tribute concert. 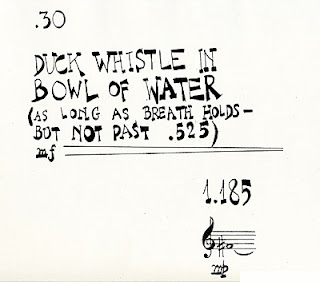 “Good people of Woodstock, let’s drive these people out of town,” said a disgruntled local during the question-and-answer session that followed the premiere of John Cage’s 4'33".

Fifty years later, in the same venue and almost to the day, pianist Margaret Leng Tan paid tribute to that anniversary with a concert almost to the day in the old barn of a concert hall that stands in the midst of a forest near Woodstock, NY, reminding us that portentous musical events took place there long before Hendrix & Co. showed up.

The length of the three-movement work was determined by chance, a newly discovered technique for Cage. The movements themselves require the artist to play nothing. It’s a listening experience that long since has vindicated Cage, not only offering an aural canvas of the intricacies of what we think of as silence, but also sharpening the ears.

Cage himself recounted the experience of hearing the rain on the roof of the theatre gradually supplanted by whispers from the audience – and then the sounds of people leaving.

Nobody left this time. In fact, the crowd sat obediently, adding little noise except for the sound of a water bottle hitting the floor – and the inevitable crinkle of cellophane, now a legal requirement at all concerts. No longer can this piece be considered a joke on the audience: it’s a listening experience the power of which was demonstrated during the work that followed.

Leng Tan deftly programmed Somei Satoh’s “A Gate into the Stars” to follow. The brief work is lean and tonal, its spare single-voiced canvas occasionally livened with diatonic chords. And every note of the piece had exceptional brilliance, a quality that wouldn’t have been so pronounced without its predecessor.

While none of the other composers on the program is working in anything like Cage’s manner, his influence is well apparent. Alvin Lucier’s “Nothing is Real” uses a popular electronic conceit: record and immediately play back a piece, in this case a single-voiced piano paraphrase of “Strawberry Fields Forever” distended by its travels through various octaves. Playback was effected (and further distorted) through a speaker-enhanced teapot, from which the melody was steeped, savored, and poured.

The Philip Glass legacy was apparent: Glass’s own “Modern Love Waltz,” arranged by Leng Tan for toy piano, was very effective on that instrument, but the piece itself is undermined by its sustained resemblance to the Fandango by Soler. Jed Distler’s “Three Landscapes for Peter Wyer” (for toy piano), while sporting minimalist influences, is a three-movement work with its own cheerful identity – the second movement, for instance, becomes a music box running down, followed by a Prokofievian finale.

Leng Tan is a toy piano specialist, and demonstrated how well the instrument works alone and paired with other instruments. Toby Twining’s “An American in Buenos Aires,” combines piano and toy piano with a hand at each. It’s a jazzy work built over a habanera figure, weaving into a bluesy mood; Laura Liben’s “She Herself Alone” twins the toy piano with a toy psaltery and follows the metamorphoses of a haunting, 14-note sequence that travels between the instruments.

Toybox and kitchen provide the battery for Guy Klucevsek’s “Sweet Chinoiserie.” Two toy pianos, a toy accordion, toy percussion, and a melodica (a toy horn with keyboard) were enhanced by chopsticks, tumblers, plates, and  tuna-fish tins. A percussive barrage soon segued into a toy-piano rhythmic equivalent, with added melody, and the relentlessly cheerful work shifted the rhythmic and melodic patterns through the instrumental array during the subsequent two brief movements with a feeling of spontaneity that overcome the sense of novelty-for-novelty’s-sake.

Which provided a plausible context for Jerome Kitzke’s “The Animist Child,” which portrays a hobbledehoy banging drums and singing wordlessly against clocklike melodic elements on toy piano. Raphael Mostel’s “Star-Spangled Etude No. 3" offers the kind of transcendent satire that strips the source of its accumulated nonsense: in this case, the “Star-Spangled Banner” and its attendant flag-waving. With a siren, whistle, cap gun, and delightfully tasteless toy trumpet enhancing the torn-apart melody, you might have caught yourself thinking, “All the performer needs is the right hat.” And she had it, a spiky green Lady Liberty chapeau.

Four works by Henry Cowell paid tribute to a Cage mentor (and Woodstock neighbor), in which Cowell’s familiar tone cluster and strings-strumming techniques were put to good use, techniques once shocking, now a familiar part of the compositional toolbox.

Similarly, Cage’s “Bacchanale” for prepared piano and “Suite for Toy Piano” sounded almost traditional in this context – but they were shrewdly presented as the concert openers, and thus still took the audience by surprise.

A congenial crowd in congenial surroundings helped make this a delightful experience, and Leng Tan supplements her musical skill with an amiability that forces you to stay open minded. The payoff comes in a piece like Cage’s “Water Music,” another work from that half-century-ago concert, in which Dada meets mumness.

The score is posted on a large easel for all to follow. It’s time-specific (those time elements determined long ago by chance), and the performer must accomplish specific tasks at the time-posts, including tuning in radio stations.

Appropriately, the first station was broadcasting a live concert (from Tanglewood). Leng Tan punctuated it with plangent chords, then blew a duck call into a bowl of water. No longer were we hearing a concert: we were hearing only a radio. When she tuned in a religious broadcaster in mid-rant and duck-called against his spiel, the whole notion of radio became sublimely ridiculous, and the audience – and even Leng Tan herself – couldn’t resist laughing. People had tears in their eyes by the end of the piece.

We’re so constantly bombarded by sounds and music that this concert proved wonderfully refreshing, helping re-define the purpose and quality of all that noise. You emerge from an experience like this choosing to listen to less, and enjoying it much more intensely.