Get those credit cards out! Here's a recent Metroland piece listing my favorites of the 2011 classical recordings -- and one coming out very soon. 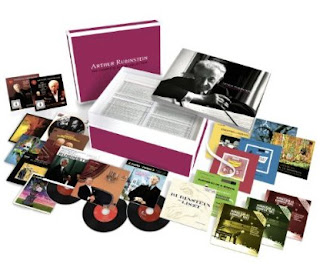 IF YOU FOLLOWED MY suggestion last year and purchased the 103-CD Jascha Heifetz box set, your investment is now appreciating. The set is out of print and its price is climbing. All the more reason to consider the forthcoming Arthur Rubinstein: The Complete Album Collection. With 144 CDs, packaged in miniatures of their original LP releases, two DVDs and a hardcover book, it’s selling on Amazon right now for $259, a price that surely will climb by the Jan. 31 release date. [It did, to $294.] Its predecessor, a Complete Rubinstein in jewel boxes, was released for $1,600, and the expense of producing the set pretty much killed the RCA Red Seal division. Evidently the original jackets approach is more economical.

It’s been a good year for great pianist. Martha Argerich turned 70 and was celebrated by EMI with three multi-disc sets: Solos & Duos (6 CDs), Concertos (4 CDs) and Chamber Music (8 CDs), much of it drawn from her Lugano Festival collections—to which was added another excellent installment, Live from Lugano 2010, which includes Chopin’s Concerto No. 1 and a charming quintet by Granados among its three discs.

Glenn Gould: In Concert 1951-1960 (West Hill) is an elusive six-CD set that features a fascinating array of broadcast recordings, including yet another Goldberg Variations and such other Bach works as the Brandenburg Concerto No. 5 and the Keyboard Concertos 1 and 5; also works by Beethoven, Schoenberg and others.

You can see Gabriela Montero in concert at the Troy Music Hall on May 4 in a recital featuring her amazing improvisations. There’s a healthy taste of them, along with a number of neglected Latin works, on Solatino (EMI).

A couple of young violinists made a splash this year. Ray Chen performed at Union College in the same program as his self-titled debut recording (Sony Classical), featuring sonatas by Franck and Tartini (“Devil’s Trill”). And even without the brooding, GQ-esque cover photos of the handsome fiddler, Charlie Siem should be selling CDs on the basis of talent. His self-titled collection of short pieces (Warner Classics) includes works by virtuoso violinist-composers Wieniawski, Kreisler, Paganini and Sarasate, and features Bazzini’s finger-busting “Round of the Goblins.” His recording of concertos by Bruch (No. 1), Wieniawski (No. 1) and Ole Bull on Warner Classics affirms his place in the realms of interpretive skill.

The incredibly prolific and fascinating Jordi Savall continued to release recordings old and new. Among the latter: The Sublime Port: Voices of Istanbul, a follow-up to last year’s Istanbul, this time exploring the multinational realm of song over the centuries with an appropriately multinational ensemble. Rereleases included Mozart’s Requiem and five discs of the five books of Marin Marais’s Pieces de Viol, reminding us of Savall’s million-selling success with the soundtrack recording of the film Tous les matins du monde (all on AliaVox).

Two of the 20th century’s bad boys of classical music were Conlon Nancarrow and George Antheil. Ensemble Modern tackled Nancarrow with As Fast as Possible (Wergo), collecting a number of transcriptions of his tough, fascinating pieces for player piano, among other works.

Antheil’s horribly neglected one-act opera The Brothers, his version of the story of Cain and Abel, got a good recording in Germany (cpo), while his four fascinating, widely varied violin sonatas (including one for solo violin) were nicely recorded by violinist Mark Fewer and pianist John Novacek (Azica).

What’s the Mahler news this year? Valery Gergiev’s symphonies cycle with the London Symphony finished with the release of Nos. 5 and 9 (LSO Live), as hot-blooded and dynamically rugged as the rest of the set. Meanwhile, Simon Rattle returned to the Symphony No. 2, this time with the Berlin Philharmonic (EMI) and soprano Kate Royal and mezzo Magdalena Kozena. It features a far more expansive reading of the first movement than he’s given before, but Rattle makes it make sense.

Kate Royal put together A Lesson in Love (EMI), a gorgeous, melancholy look at the arc of a love affair threading together songs by Schubert, Wolf, Copland, Brahms, Duparc, Bolcom and others.

In other vocal recommendations, Nikolaus Harnoncourt tackled Brahms’s German Requiem with soprano Genia Kühmeier, baritone Thomas Hampson, the Vienna Philharmonic and the Arnold Schoenberg Choir (Sony Classical) in version that’s deliberate of tempo but filled with excitement in a showcase of what a good recording should sound like.

Another favorite Requiem is that of Gabriel Fauré, newly recorded by Paavo Järvi in his new position of Music Director of the Orchestre de Paris (EMI). With baritone Matthias Goerne and countertenor Philippe Jaroussky, it’s a lovely performance of the full orchestral version, and the disc is filled out with such Fauré rarities as Super Flumina Babylonis and Cantique de Jean Racine.

Fauré’s chamber music also gets its due in a new five-disc Virgin Classics set featuring the Capuçon brothers, Renaud (violin) and Gautier (cello), the Quatour Ebène and others. Here are the two violin sonatas, the two cello sonatas, a piano trio, a string quartet, the two piano quartets and the slightly forbidding piano quintets.

Finally, local favorites the Emerson Quartet are newly arrived on Sony Classical. Their debut there is a revisit of Mozart’s three Prussian Quartets, his last works in this form. Typically with the Emersons, they avoid the sentimentality that can creep into pieces like this, and instead give us music that’s crisp and scintillating and ageless.