Drive (Past) My Car 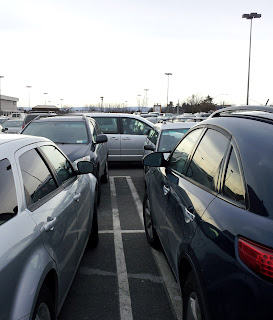 Yesterday’s Martin Luther King Day celebrations involved a lot of staying home from work for people, but that didn’t keep them off the streets. My early-morning coffeeshop visit was one of surprising quiet until about ten o’clock, when folks poured in and packed the place.

I had joined my wife on her day off in a succession of errands that took us next to Colonie Center, an older shopping mall on which some new facades have been slapped within the past decade, increasing business to a point that strains the front-of-the-mall parking lot some weekends and in the run-up to Christmas.

When we arrived – it couldn’t have been much before eleven – there still were plenty of spaces. When we emerged after a lousy food court lunch, the lot was jammed with space-seeking cars circling the aisles, the drivers no doubt fortified by all the coffee they’d consumed while annoying me earlier in the day.

This was where I turned evil. I have no excuse for this behavior except that it satisfies some hobbledehoy urge for mischief.

With packages in one hand, I fished out my keys with the other and held out the one meant for my car. I focused on an automobile not too far down the aisle I walked. I saw peripherally that I’d already picked up a stalker – a minivan crawling in my wake, ready to seize the space I’d open up.

“See the blue Camry up ahead? Walk along the passenger side.” Annoyed as she was, she did it. I stopped by the Camry’s driver door, then looked across the top of it at her. “Okay! Let’s walk.” And on we went, leaving what I hoped was a disgruntled would-be shopper in our wake.

“Come on,” I said to Susan. “Don’t you hate getting followed by cars like that?”

Best is when you can get a car stopped in each direction, as if they’re going to conduct car-to-car combat once the ersatz space is offered. Although we weren’t able to achieve that one, we at least were able to piss off a Mercedes, and it doesn’t get much better than that.
Posted by B. A. Nilsson at 8:38 PM

A rainy night at the Danbury Fair Mall. I've been out in my parked car, enjoying a furtive half-a-cigarette and listening to Fats Waller. I'm walking back toward the mall entrance and see a stalker car awaiting the departure of one with its lights on and motor running. The stalker/driver angrily asks the perhaps-departing car's driver when he's leaving, and receives the response that he's not. The stalker/driver then unleashes such a stream of obscenity-laden invective that even I, who am no stranger to any of the words thus deployed, am taken aback.

Without really pausing to think, I point to my car a few spaces away and ask the stalker if he'd like my spot. He asks if I'm leaving, and I say "No, but I'd do it for you."

He seems stunned, and pauses for three stage beats. "No, thank you,sir." And drives off.

Life's a funny proposition, after all.