Vintage Stuff Dept.: Although nearly a decade old, the numbers in this Metroland piece remain fairly current. And it remains a popular topic, as the number of reprints this article has enjoyed would indicate. 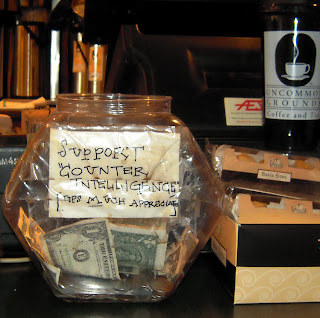 WE WERE AT A sit-down deli on 7th Avenue in Manhattan, a bustling place where prices are high and service is frantic. It was about 25 years ago. Four friends and I were en route to a concert and running a little late.

One by one, we paid our checks—separate checks, because if we tried to assemble funds for a combined result someone invariably would get away with underpaying—and hit the sidewalk. Not surprisingly, the fellow in our party most notorious for underpaying was last. As he approached the rest of us outside, the deli door burst open and a waitress flew out after him.

“I don’t know where the hell you come from,” she screamed, “but in New York City it’s customary to leave a goddamn tip!”

Abashed, he dug in his pocket and produced some more money.

Although that waitress may have imagined that some backwoods community exists where tipping is unknown, in this country at least you’re expected to pony up with gratuities just about everywhere. If it isn’t written into the tab, it’s an unspoken expectation.

And it used to be a whole lot simpler. In a nice restaurant, you tipped 15 percent for lunch, 20 percent for dinner. You threw a buck or two to your hairdresser, delivery person, bellhop. If you lived in an apartment, you knew the rules for doorman, super and such.

Now we’re in an age of tip jars and buffet lines. From maître d’s to subway bums, everybody seems to have a hand outstretched. Being a voluntary act, tipping isn’t governed by inflexible rules, but it’s the kind of voluntary act the omission of which could compromise your quality of life.

Etiquette books and Web sites are out there to offer guidance, and I’ve drawn suggested answers from many such sources. Others are my opinion, and should be regarded as no more than that. But keep in mind that my quality of life is pretty good.

Q: OK, the big one. The basic one. Restaurants. How much?

A: The old-fashioned “rule” suggests 10 to 15 percent at lunch—the latter if there’s linen on the table—and 15 to 20 percent at dinner, again going higher for linen. Calculate the tip from the before-tax subtotal.

Q: Should my tip also be based on the price of wine?

A: Yes, if your server presented and poured a moderately priced bottle or two. If you dealt with a sommelier, give 10 percent of the price of the wine (15 if you got extra attention), and pay it in cash.

Q: What about the bartender?

A: Settle your bar bill before going to your dinner table, and tip 15 percent.

A: This is a more subjective call. According to Amy Vanderbilt’s Book of Etiquette, only tip the maître d’hôtel under a couple of circumstances: If you’re new to a place that you expect to frequent, slip the person a 10 on your way in. If you’re a regular customer, part with a 20 every few visits. (And if you live that high on the hog, take me out to dinner once in a while.)

Q: OK, suppose I take you out to dinner at a nice restaurant, but I turn out to be a cheap bastard and you notice that I didn’t leave enough?

A: (From The Everything Etiquette Book) If you notice your host has grossly undertipped—and if this is a restaurant where you are known or to which you are apt to return—you may discreetly leave more money on the table as you leave.

Q: How about a cup of coffee at a lunch counter?

A: Leave at least a quarter, and calculate upward from there.

Q: I like buffets—Chinese and Old Country and especially Sunday brunches. What’s the going tip rate on those?

A: We’re moving into the realm where you do much of the work. Add serve-yourself places like Panera Bread and you begin to wonder just whom you’re rewarding. At a buffet, you’re probably being served beverages and, with any luck, your table is attended and cleared regularly. Add 10 percent as a tip. At a full-bore self-service joint, use your discretion, but don’t be a cheapskate.

Q: Why do so many restaurants add a tip to the bill for parties of six or eight or more?

A: It’s a general rule that the larger the group, the stingier the tip. There’s always at least one loudmouth at the table, drunker than the rest, who gets a bug up the butt over some imagined slight and wants to stiff the server. And big parties demand a lot of attention.

Q: There’s linen on the table but the service sucked. How little can I leave for a tip?

A: How often do you plan to return? It’s effective but cowardly to stiff the server, and I have known those who wrought revenge. You can deliberately undertip, leaving, say, 10 percent, but then it’s hard for the server to know if you were unhappy or merely stupid. Best to let someone at the restaurant know about your unhappiness, and calculate your tip based on the response.

A: Say no more. From the moment you reveal the promised discount, the service staff loathes you. Not only will you order the bare minimum in order to keep that bill tiny, you’ll also tip, probably poorly, only on the billed amount.

A: Then murmur to your server, when you request the check, “I know I’m getting comped this (entrée, dessert, whatever), but could you also let me know the pre-discount total so I can tip correctly?” Suddenly you are promoted into the ranks of the holy.

Q: What about tipping at a take-out restaurant?

A: You’re just setting me up for the next question. I have long been a staunch believer in giving no extra money to take-out restaurants, until I started patronizing some very nice non-chain places that I want to see endure. Now I add a 10 percenter to the bill at the places I frequent. It’s your call.

A: You’re really going to ask this, aren’t you?

Q: Yes! What about tip jars in places like Starbucks and Dunkin’ Donuts?

A: Once upon a time, a lonely jar sat on the lid of the piano to accept rewards for the keyboard artist who struggled there, night after night, to entertain you. Now you find tip jars everywhere you turn, typically on counters behind which the Youth of America serve. Seems like nobody is paid a living wage anymore—and in fact that’s true. With a quarter of the American workforce earning less than poverty-level wages (even as the average CEO’s compensation continues to skyrocket), the minimum wage is a scandal and is in dire need of an overhaul. Meanwhile, we’re asked to do what Congress won’t, and supplement those wages. This doesn’t make me look any more kindly upon those tip jars, however, which continue to effloresce like a skin rash. I don’t think that drawing a cup of coffee and cream-cheese-smearing a bagel calls for more skill or effort than any of the non-tip-demanding service jobs, and some parity should exist among them. Here’s my personal determining factor: I tip if I’m planning to occupy a table. And I tip to support the non-chain establishments.

Q: I tip the guys at the car wash even before the car goes through. Am I an idiot?

A: Now you’re easing into the realm of insurance. You’re taking out a short-term, prepaid plan to guarantee, as far as possible, a favorable outcome. There’s a Tip for Success philosophy that attempts to show you how to bribe your way to the top, and it may well begin at the car wash. You’re probably a genius.

Q: I know it’s supposed to be a buck a bag at a hotel, but does that include a plastic shopping bag with the leftover car snacks? Does it include, say, a hockey stick?

A: Actually, start with $2 for the first bag, and a buck a bag after that, adding extra if you are carrying, say, gold ingots. As for your non-bag bags, use your discretion. A hockey stick may be small but it’s annoying to carry, so it probably rates the buck. Carry the plastic shopping bag yourself.

Q: What about the hotel’s hair salon attendant and people like that?

A: Tip a hotel salon attendant as you would your own hairdresser. A spa attendant should get $2 for providing towels and other services; add a buck to the shoeshine price if you sat for the shine. Doormen get a buck or two if you get help with your bags, and $2 to $5 for help with a cab—more if it’s raining. Above all, don’t forget the one you rarely see, and leave $2 to $3 per night for housekeeping.

Q: I buy a case of wine. The store clerk insists on schlepping it to my car. Tip needed here? And is it the same for bags of groceries?

A: What’s your relationship with the store? A tip probably isn’t expected here, just your repeat business. But it won’t kill you to part with a buck, especially in foul weather.

Q: What about special-occasion restaurant events, like baby showers, birthday parties, going-away parties, that sort of thing? Who tips? How much?

A: As the host, you’re adding 15 percent to the bill, unless it’s been added for you (and it probably has, so make sure to make sure). As a guest, you’re not expected to tip for the party, but do take care of parking valet, checkroom attendant and the like if it’s that fancy an event.

Q: Is there a gestalt, a summing-up, a last word on tipping—a tipping tip, as it were—that I can carry away from this column?

A: Reward extra effort. Err on the side of generosity. As the economy continues to tank, you never know what your next job might be.