Wine & Dine for the Arts: The First Year

The third Albany Chefs' Food and Wine Fesitval has kicked off at the Crowne Plaza. Two years ago, I worked behind the scenes at the inaugural event and wrote about the experience for Metroland. 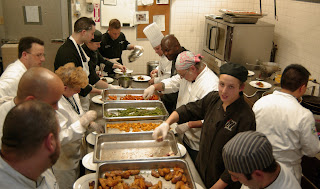 ANY CHEF, whether a culinary school grad or someone who worked through the ranks, has worked the various kitchen stations. No manner of prep is unknown or undignified. It only stands to reason, but I had stunning proof of this during last Saturday’s Grand Dinner at Albany’s Crowne Plaza Hotel, when I witnessed the amazing way in which chefs both accomplished and new to the game can quickly bond to work together to deliver an amazing product.

The Albany Chefs’ Food and Wine Festival was a three-day event that began individually at 16 Albany restaurants and culminated in the Saturday dinner, with wine tastings and seminars along the way. It recalled the glory days of the Desmond Hotel’s Wine Weekends, so it was no surprise to learn that Gary Smith, who created those Desmond events, was a driving force behind this one as well.

And the event was created as an arts-funding device, in this case to benefit Capital Repertory Theatre. Although the numbers aren’t yet official, Festival co-founder Donna Purnomo believes that at least $30,000 was raised. “I’m absolutely thrilled,” she said. “This went way beyond my expectations.”

She and her husband, Yono, are both lovers of theater, so it was a natural way to begin what’s hoped to be an annual event. As plans took shape last year, they enlisted Todd Reichelt and Jeffrey Michaelson, general manager and catering director of the Crowne Plaza, as co-founders, adding still more talent as more challenges became evident.

But the greatest coup was in landing the kitchen talent. Some two dozen chefs were on hand Friday evening and Saturday afternoon to offer food samples to go with the many wines being tasted in the Grand Ballroom. Saturday night, a seven-course dinner was served to nearly 300 people, not counting the hors d’oeuvres prepared by Luc Pasquier (Jack’s Oyster House), Kevin Roberts (Crowne Plaza) and Steve Stofelano (Mansion Hill Inn).

I worked alongside the Café Capriccio team of chef Jim Rua and his assistant Hank Ciccone preparing a galantine of rabbit and pheasant wrapped in puff pastry, served with a tart mango salsa. Which meant I spent the better part of the afternoon peeling and dicing mangoes and kiwis and peppers and onions before turning to help Jim and Hank wrap the forcemeat they assembled in pastry and get them into the oven in time.

Hank and I hurried to the Crowne Plaza as the last of our loaves finished cooking in order to lay claim to what we feared would be ardently contested space. But: “This is your lucky day,” one of the hotel staff told us. “You can have space in the cold kitchen.”

Which meant we shared tables and speed racks with the some of the hors d’oeuvres and all of the desserts – and dessert chef Anand “A.J.” Jayapal, of Panza’s, already had commandeered considerable rack and tray and cooler space. But whatever we needed was located somewhere. We got the rest of our food in place and, being the fourth course, settled back to watch.

Nobody settled for long. Next out the door was a starter of a single plump scallop, sculpted by Marché’s Brian Molino with a garnish of spaetzle and a fennel purée. A prototype was assembled, and the team went into place, creating a deft-fingered assembly line in the hot kitchen as other chefs, hotel cooks and a group of culinary students from Schenectady County Community College joined forces.

How did the dining room handle it? I swapped my apron for a sports coat and joined my wife at a table for course number two. Despite my late arrival, a server instantly set water and wine before me. The bread basket was refreshed. And then came a small, excellent dish of escolar, poached just right, sitting on a sweet Kabocha squash purée and drizzled with a Sauternes-laced beurre blanc.

The floor staff circulated trays with quiet efficiency, landing the plates quickly without appearing hurried. As always, it was an amusing contrast to the bustle on the other side of the doors, where chaos seemed ever imminent.

Mezza Notte’s Mark Graham sent out a dish of roasted quail and sweetbreads, but at that point I was distributing 300 small, square plates across 50 rectangular trays in three tall speed racks, one of them with a disturbingly wobbly wheel. As the intermezzo was served, our pastry logs were finishing a half-hour in a couple of warming ovens.

Then it was showtime. Suddenly there was Dale Miller working alongside Jim to lead a team in slicing the pastry so that two pieces could be presented – an arrangement conducted by more hands as the trays passed down our line. I led the group that quickly, madly, neatly spooned salsa on the plates before passing them down to the group that would add a sprinkling of baby lettuce – and wipe any mess left (probably by me) behind. At the other end, A.J. supervised the finish, helping direct the tray traffic as well.

As suddenly as they were assembled, the plates were gone. Already the action had shifted back to the hot kitchen as Jaime Ortiz (Angelo’s 677 Prime) set up plates of lamb three ways roasted, as a meatball lollipop and a portion of sweetbread.

Dale Miller’s course was a sous vide preparation of beef tenderloin, in which the meat is poached at its serving temperature for maximum flavor. His serving took up the length of the prep table as each garnish element was added from their respective bins. 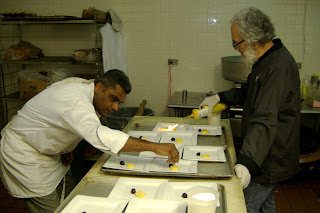 Then Jim and Hank and I were handed propane torches, set to work on A.J.’s 300 mini crème brulée plates. A sprinkling of sugar, a blast of flame, and the caramelized sugar instantly hardened atop the dessert, to which was added a single sour cherry and a warm chocolate muffin as they went out the door.

And then it was done. No tempers and no disasters despite there being no shortage of egos.

There was enough dessert left over to entice most of the chefs over for samples. Each had been cell-phone photographing his own and his colleagues’ work, and now they clapped arms round one another and promised to do it again. “This was great,” A.J. declared. “We needed this. January’s a tough month, and this has been a tough economy, so it’s great to be able to see one another and work together like this. This is what makes our restaurant scene so special.”
Posted by B. A. Nilsson at 10:46 AM