Sowing the Show of Shows

From the Video Vault Dept.: It’s been gratifying to see that the birth of the DVD inspired many an actual treasure to be released on that format right off the bat – including classic vintage television programs. I’d discovered Sid Caesar’s classic TV sketches thanks to occasional re-runs long before I first saw him perform in person, in Neil Simon’s “Last of the Red Hot Lovers” during the early 1970s at Danbury, Connecticut’s Candlewood Theater. He performed at Proctor’s Theatre in Schenectady in 1988, and my review of that show is here – but here’s a brief piece I wrote welcoming a best-of collection of his 1950s TV sketches.

OLD, OLD TELEVISION would seem to be a poor source for a new DVD, but the technology results both in a clearer picture than a VHS release and the ability to subject the source to computer-based editing, which has been skillfully used throughout this release. 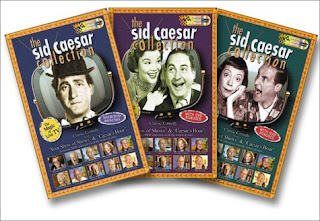 It’s a three-disc set of material from various Sid Caesar television ventures in the 1950s, including “Your Show of Shows,” enhanced with recently-filmed interviews that collect comments from Caesar and his illustrious stable of writers and actors – including Woody Allen, Mel Brooks, Neil Simon, Carl Reiner and Larry Gelbart.

The core of each disc, of course, is a set of sketches. These were brilliant when they aired a half-century ago; compared to what passes for comedy today, they’re transcendent. As a solo performer, Caesar was unmatched, and the 1949 “Five Dollar Date” ranks as one of the most breathtaking acting jobs you’ll ever see. Working with his ensemble, he had impeccable timing and a good sense of what would be not just funny but also surprising. Teamed with Nanette Fabray in “The Fur Coat,” his role as aggrieved husband laid the foundation for Jackie Gleason and all subsequent sitcom spouses.

Caesar and Fabray wordlessly argue to the first movement of Beethoven’s Fifth Symphony, anticipating Ernie Kovacs; he and Imogene Coca perform “The Cobbler’s Daughter” with Carl Reiner and Howard Morris entirely in mock Italian, which you couldn’t get away with today but which is nevertheless brilliant.

Each disc has a theme, such as “Inside the Writer’s Room,” which lets the interview subjects reminisce, in this case, on the way a show was put together. Commentary is choppy, though, often cutting from one interview subject to another in mid-sentence, which is impressive but annoying.

Although the discs themselves are short, running 65 to 75 minutes apiece, they’re packed with extras, including extra sketches. And the sketches ultimately are much more interesting than the interviews, which, unfortunately, aren’t easily skipped.

Still, if you don’t mind black and white, this is as good as television got, and let’s hope it’s a harbinger of many more Sid Caesar releases.