From the Classical Vault Dept.: The Tokyo String Quartet was founded in 1969 by students who had been schooled in Tokyo before continuing their studies at the Juilliard School. They disbanded in 2012, but made several stops in New York’s Capital Region along the way. Here’s my review of one such event in 2009.

IF THERE WAS A MELANCHOLY EDGE to the happy return of the Tokyo String Quartet, it was only in the programming. Three works tinged (or shot through) with melancholy comprised the program, performed by an internationally renowned ensemble making its fourth appearance for the Friends of Chamber Music – and its first in 28 years. 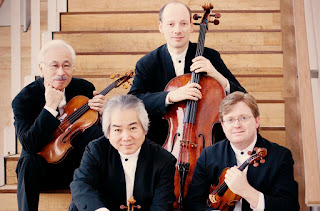 At the heart of the program was Bartók’s sixth (and last) quartet, a trenchant piece whose misery is explained by the composer’s despair over the fascist incursions into his native Hungary and the death of his mother. Each of the work’s four movements is introduced by a theme marked “mesto,” meaning “sad.” It’s introduced quietly, poignantly, by siolo viola, and each time that theme reappears, another instrument is added. Each of the first three movements takes a vigorous side-trip, but the finale is given over to the “mesto” experience, finishing the piece with as unhappy a mood as music can muster, a soft plucked chirp from the cello the only hint of optimism. There must be something unwaveringly sad in the Hungarian soul, because the world’s most depressing pop song, “Gloomy Sunday,” is also a product of that country.

A string quartet ensemble often has been described as a marriage among four. Four playing styles, four interpretive ideas, four tones of voice have to melded into a congruent sound, a goal achieved only through time and generosity. The Tokyo Quartet, founded in 1969, long ago achieved that, even with significant changes in membership over the years.

What distinguishes their – or its – playing now is the successful exploration of a place beyond that congruence, a place where individual ideas tug at the center, embodying the tension inherent in any good composition. But especially in a string quartet, that most perfect realization of our inner songs. Four-part writing defines our harmonic sense, and the instruments themselves mirror our collected voices.

The Bartok quartet the Tokyo Quartet performed realizes much of its tension through the interplay of the various voices, so each of the players is more of a soloist than in most of the repertory. This is in dramatic contrast to the Beethoven quartet that opened the program, in which the instruments work vigorously together to articulate the nuances of the piece.

It’s subtitled “La Malinconia,” and the melancholy of the title variously is said to refer to: The final movement, which is so marked; the plaintive Adagio, which breaks your heart; the work as a whole. There’s a school of interpretation that reads the piece as an expression of the composer’s own manic-depressive tendendcies, and certainly the six jarring changes of tempo in the last movement – including a Prestissimo wrap-up – suggest some drastic mood swings.

Mendelssohn wrote his second quartet while still a teenager, but it came a scant few months after Beethoven’s death, at a time when Mendelssohn was fascinated with the other’s late quartets. Obvious tributes to those works abound in the piece, which closed Sunday’s concert, and Mendelssohn created some of his most appealing melodies in this and other minor-key works.