Well May the World Go

SEVEN YEARS AGO, Pete Seeger ventured the hope that “the human race has a 50/50 chance to be here a century from now.” He had, at that point, seen almost a century of life himself, and spent the bulk of those years seeking and sharing musical answers to society’s difficult questions. 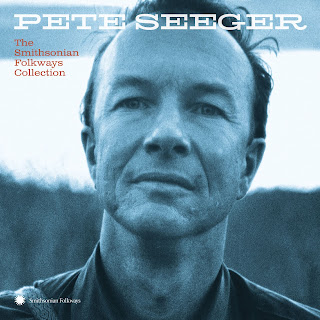 Seeger’s recorded legacy reflects this long, expansive life, capturing him in a variety of venues and, when he wasn’t solo, working with the most influential performers of the folk-music scene – not to mention jazz and blues and country, because it all melded, under Seeger’s guidance, into a sound that defied classification.

Smithsonian Folkways Recordings celebrated the Seeger centenary with a six-CD set that draws from his hundreds of recordings for Moses Asch’s Folkways label (and a number of ancillary labels) made from 1941 to 1998. It’s as thorough a collection as you’re likely to find, and it sounds terrific – which is a good think, because some of those originals were dashed off onto unstable acetate discs that didn’t sound great when they were first released. Seeger was wont to appear at Asch’s office and record a song or three, which eventually would be compiled into an album, well over a hundred of which emerged over the decades.

He recorded for other labels, like Columbia and Vanguard, the latter home to his sessions with The Weavers, but this collection is a lavish best-of, which detailed, well-written program notes to lead you through the treasures.

Fittingly, the set opens with one of Seeger’s many recorded versions of “We Shall Overcome,” this one a solo performance from 1964 – but it’s a song he’d been singing for nearly two decades before that after learning a version sung by black tobacco workers. Seeger changed the song’s second word from “will” to “shall,” a creative decision he credited it as one of the few worthy legacies of his aborted (abandoned) Harvard education.

Other Seeger hits, such as they are, crowd the start of Disc One: “If I Had a Hammer,” written with Weavers co-founder Lee Hays; “Turn, Turn, Turn,” “Goodnight, Irene,” “Guantanamera,” “The Bells of Rhymney,” and, of course, “Where Have All the Flowers Gone.” It’s not until we get into Disc Two that we start mining the lesser-known but still-sparkling gems.

Union songs abound, beginning with a medley titled “Union Hoot,” each song a setting of amusing, then-current lyrics set to a known tune. You’ll find most of the components of this medley (“The Scabs Crawl In,” “We Pity Our Bosses Five,” and more) on other Seeger recordings (“Rainbow Quest” is one), but this is a previously unreleased acetate of a live performance from 1946 that also features Lee Hays. Hays is also part of the chorus on a 1946 “Joe Hill” that was recorded for but not used on an album titled “Roll the Union On” for Asch’s Disc label; also here are the title song and “Listen, Mr. Bilbo,” celebrating a racist Mississippi senator.

“Talking Union” may be the best-known of such anthems, although this collection perpetuates a censored version, as originally released by Folkways, in which “god damn” is razor blade-sliced to what was then regarded as the less-offensive “damn,”) with added echo. It was recorded in 1941 as part of an Almanac Singers album, and Asch purchased it over a decade later. (You can hear the original, uncensored, sans echo – and much else by Seeger that didn’t make it into this collection – on a costly Bear Family set titled “Songs for Political Action,” the ten discs of which explore topical song recordings made between 1926 and 1953.)

The early 1940s were a transition time for Seeger and his musical friends. Ardently isolationist as the Nazi threat grew, they switched to a hawkish stance after Hitler attacked the (then-allied) Soviet Union in mid 1941. “UAW-CIO,” from 1944, celebrated what had become a military-supplies-making union, recorded by a group that also included Alan Lomax, Burl Ives, Josh White, Sonny Terry, and others – a group that would be shattered and virulently polarized a few years by House UnAmerican Activities Committee-era blacklisting.

Speaking of which, a live 1956 performance of Lee Hays’s “Wasn’t That a Time” is introduced by Seeger with the recollection of some people who thought the song was terrible and asked him not to sing; he coyly avoids pointing out (as the program notes do for him) that he was referring to his appearance before HUAC members where that happened.

Although I would argue that Seeger was an activist in everything he did and wrote and sang, there were many nuances to the man. He loved performing (and writing songs) for children, and this set features a rarity, a children’s-song medley titled “You Can All Join In,” recorded for Young People’s Records in 1948. You’ll also hear children’s songs like Woody Guthrie’s “Why Oh Why?,” recorded in 1965 but never released until now, and Seeger’s own performance pieces like “Abiyoyo” and “Foolish Frog.”

Not surprisingly, there’s plenty of Woody in this set, including “So Long, It’s Been Good to Know You,” “Deportees,” and “This Land Is Your Land,” and a generous sampling of original songs that have become traditional, like “If I Had a Hammer,” “Goodnight, Irene,” “Kisses Sweeter Than Wine” (the last two actually rewrites of Leadbelly songs), “Well May the World Go,” and many, many more.

Anti-war songs can be as inspiring as they are unsuccessful, and include Woody’s “Sinking of the Reuben James” and Pete’s own “Where Have All the Flowers Gone” and “Waist Deep in the Big Muddy,” the latter costing him a TV appearance in the ’60s. The incredible variety of material includes an unreleased “Sailin’ Up, Sailin’ Down,” part of Seeger’s successful effort to clean the Hudson River, a cowboy song (“Strawberry Roan,”) the “Seneca Canoe Song,” and another song from oppressed Americans – “Que Bonita Bandera,” from Puerto Rico.

The blues classics “House of the Rising Sun” and “In the Evening When the Sun goes Down” (with Memphis Slim and Willie Dixon) are here – and you’d think his “St. James Infirmary” would qualify, but it’s actually a version of “Cowboy’s Lament,” itself drawn from an older Irish ballad called “The Unfortunate Rake.” Among the other traditional songs here are the Child ballad “The Water Is Wide,” which becomes an nearly nine-minute sing-along, “Greensleeves,” performed as a recorder solo, “Down in the Valley,” “Barbara Allen,” and “Shenendoah.” Among the fascinating one-offs are Tom Lehrer’s “The Wild West Is Where I Want to Be” and the South African wedding song ”Babevuya,” recorded in 1955 with future stars Mary Travers and Erik Darling. Seeger wanted you to sing along, and if he could teach you to do so in another language, all the better. Other examples here include “Suliram” (Sumatra), “Tzena, Tzena, Tzena” (Israel), and “Wimoweh” (South Africa, with a complicated history in which Seeger eventually succeeded in sending royalty payments to songwriter Solomon Linda).

The very sound of his very familiar voice is inspiring in itself, but as you listen to him exhorting his audience to sing songs like “Deep Blue Sea,” it’s more inspiring still, especially as he magically transform a sometimes-reluctant house into a choir roaring along in multi-part harmony. Revisiting his repertory as performed by the man who performed it best, you can be excused for hoping that, yes, the human race may still have a chance.

Pete Seeger
The Smithsonian Folkways Collection
Produced by Jess Place and Robert Santelli
Posted by B. A. Nilsson at 10:48 PM