From the Literary Vault Dept.: Ernie Pyle turned out the best-written, most-insightful profiles of all manner of Americana as he traveled from state to state in the 1930s. The collection I reviewed below came out thirty years ago, but the excellence of what Pyle wrote has yet to dim.

THE WARTIME DISPATCHES Ernie Pyle sent from the front during the early 1940s did a lot to connect a confused nation with its far-flung heroes. When the writer stopped a sniper’s bullet near Okinawa, he became a civilian martyr. 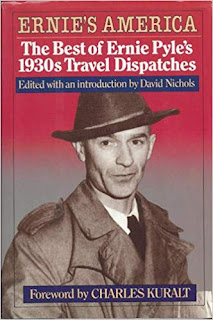 For several years before the war he was a different kind of correspondent. He travelled throughout the 48 states in the late 1930s and wrote, six times a week, about people and places poignant and sentimental. And funny, but with a gentle, midwestern sense of fun. He never laughed at his subjects.

There have been travel writers before and since, but Pyle set a tone that’s hard to match and has never been bettered. He covered vast distances by car, “the speedometer needle never passing 60,” and saw an easygoing nation determinedly pulling itself out of the ravages of the Depression. It was a way of living that’s long behind us, told in a folksy style that never lapses into the self-consciousness of, say, a Garrison Keillor.

“Ernie’s America” collects what editor David Nichols considers the best of Pyle’s American writings. Six times a week for several years is a lot to choose from, but I’m inclined to trust Nichols’ judgment. For one thing, he’s a Hoosier, just like Pyle was. (Although Indiana seems to recognize its writers only with eponymous rest stops on Interstate 80. And you’ll find, at the Pyle Rest Area, that Ernie’s commemorative plaque is obscured by a video game.)

For another, Nichols has caught the Pyle travel bug, and promises to make a cross-country trip following what he can find of the old Route 66. Finally, he supplies an introduction to the pieces that tells us about the author with frankness and affection: scholarly, but not academic.

It’s ironic to learn that the author of these many charming vignettes was himself shy to a point of grumpiness, resentful of the attention the columns brought – or at least of the sense of instant friendship it allowed his readers.

The columns would seem to have been written even as Pyle collected his material, in the way Beethoven’s Sixth Symphony sounds as if it were written while the composer strolled through a pleasant glade. In neither case was that true; in Pyle’s case the columns were knocked out six at a time while he drank himself into oblivion.

Which takes nothing away from the charm of the pieces themselves. He tells you about the horses used by mail carriers in Spokane: “There has been only one horse that absolutely couldn’t learn the routes. After three months they gave up and sent this horse back. The others know the routes so well that the collector in some places goes clear through a building and out the back door, and the horse will meet him on the other side of the block.”

The sense you get is of a wide-eyed traveller eager to be convinced that there’s still wildness, still innocence around the country. And he finds it, especially throughout the west, where he seemed to travel the longest.

Pyle finally settled in Albuquerque, and his house remains as a monument to his work. But the best monument was the sense of good feeling his column imparted each morning, the sense that a guy struggling in Pittsburgh was no different from someone struggling in Rapid City. And that a few lucky souls were able to find a measure of peace and success in this country.

It’s easy to slap a label of “nostalgia” on this collection, and there are stretches of sentiment so strong you could hang your clothes out to dry on them. But nobody could achieve what Pyle achieved without a deep-seated love for his country and the people in it, and this book is a splendid testimony to that feeling.