Guest Blogger Dept.: Mark Twain’s keen sense of mankind accommodated a semblance of good behavior, but a flurry of books offering detailed rules of etiquette proved to be too much for him, and he undertook to write a parody of them. He never finished the project, but here’s a significant excerpt.

Although through the fiat of a cruel fate, I have been debarred the gracious privilege of your acquaintance, permit me, Miss [here insert name if known], the inestimable honor of offering you the aid of a true and loyal arm against the fiery doom which now o’ershadows you with its crimson wing [this form to be memorized, and practiced in private]. 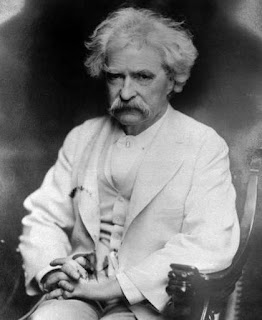 Should she accept, the young gentleman would offer his arm – bowing, and observing “Permit me” – and so escort her to the fire escape and deposit her in it (being careful, if she have no clothes but her night dress, not to seem to notice the irregularity). No form of leave-taking is permissible, further than a formal bow, accompanied by a barely perceptible smile of deferential gratitude for the favor which the young lady has accorded – this smile to be completed at the moment the fire escape starts to slide down, then the features to be recomposed instantly.

A compulsory introduction at a fire is not binding upon the young lady. The young gentleman cannot require recognition at her hands when he next meets her, but must leave her unembarrassed to decide for herself whether she will continue the acquaintanceship or ignore it.

To return to the fire. If the boarding house is not provided with a fire escape, the young gentleman will use such other means of rescue as circumstances will afford. But he will not need to change the form of his proffer of assistance; for the speech has been purposely formed in such a way as to apply with equal felicity to all methods of rescue from fire. If egress may be had to the street by the stairway, the young gentleman will offer his arm and escort the young lady down; if retreat in that direction is cut off by fire, he will escort her to the floor above and lower her to the street by a rope, fastening it by slip noose under her armpits, with the knot behind (at the same time bowing and saying “Permit me”); or if no rope be procurable, he will drop her from the balcony upon soft substances provided by the populace below – always observing “Permit me,” and accompanying the remark with a slight inclination of the head. In either ascending or descending the stairs, the young gentleman shall walk beside the young lady, if the stairs are wide enough to allow it; otherwise he must precede her. In no case must he follow her. This is de rigueur.

In rescuing the chambermaid, presentation of a card is not necessary, neither should one say “Permit me”. The form of tender of service should also be changed. Example:

There is no occasion for alarm, Mary [insertion of surname not permissible]; keep cool, do everything just as I tell you, and, Deo volente, I will save you.

Anything more elaborate than this, as to diction and sentiment, would be in exceedingly bad taste, in the case of a chambermaid. Yet at the same time, brusqueries are to be avoided. Such expressions as “Come, git!” should never fall from the lips of a true gentleman at a fire. No, not even addressed to the humblest domestic. Brevity is well; but even brevity cannot justify vulgarity.

In assisting at a fire in a boarding house, the true gentleman will always save the young ladies first – making no distinction in favor of personal attractions, or social eminence, or pecuniary prominence – but taking them as they come, and firing them out with as much celerity as shall be consistent with decorum. There are exceptions, of course, to all rules; the exceptions to this one are:

Partiality, in the matter of rescue, to be shown to:

1. Fiancees.
2. Persons toward whom the operator feels a tender sentiment, but has not yet declared himself.
3. Sisters
4. Stepsisters
5. Nieces
6. First Cousins
7. Cripples
8. Second Cousins
9. Invalids
10. Young lady relations by marriage
11. Third cousins, and young lady friends of the family
12. The unclassified

Parties belonging to these twelve divisions should be saved in the order in which they are named.

The operator must keep himself utterly calm, and his line of procedure constantly in mind; otherwise the confusion around him will be almost sure to betray him to very embarrassing breaches of etiquette. Where this is much smoke, it is often quite difficult to distinguish between new Relatives by Marriage and Unclassified Young Ladies; wherefore it is provided that if the operator, in cases of this sort, shall rescue a No. 12 when he should have rescued a No. 10, it is not requisite that he carry the No. 12 back again, but that he leave her where she is without remark, and go and fetch out No. 10. An apology to No 10 is not imperative; still it is good form to offer it. It my be deferred, however, one day – but no longer. [In a case of this nature which occurred during the first day of the Chicago fire, where the operator saved a No.7, when a No. 6 was present but overlooked in the smoke, it was held by competent authorities, that the postponement of the apology for the extraordinary term of three days was justified, it being considered that the one day term during which the apology must be offered means the day after the fire, and therefore does not begin until the fire is out. This decision was sustained by several Illinois courts though which it was carried; and experts are confident that it will also be sustained, eventually, in the Supreme Court of the United States – where it still lingers.]

To return to the fire.

Observe: 1's, 3's, 4's and 5's may be carried out of the burning house, in the operator’s arms – permission being first asked, and granted; 7's and 9's may be carried out without the formality of asking permission; the other grades may not be carried out, except they themselves take the initiative, and signify, by word or manner, the desire to partake of this attention.

Form for Requesting Permission to Carry a No. 1, 3, 4 or 5, out of a Boarding House
Which is On Fire.

The bonds of [here insert “tenderness” in the case of a No. 1; or “blood” in other cases] which enfold us in their silken tie, warrant me, my dear [here insert given name, in all cases; and without prefix], in offering to you the refuge of my arms in fleeing the fiery doom which now, with crimson wing, o’ershadows us.

In cases where a member of one of the prohibited grades signifies a desire to be carried out of the fire, response should be made in the following form – accompanied by a peculiarly profound obeisance:

In view of the circumstances, Madmosselle [insert name only in cases where the party is a 6 or an 8 – be careful about this], that but fragile and conventional [here-in case of a No. 2 – insert “Alas!”] are the bonds which enfold us in their silken tie, it is with deepest sense of the signal distinction which your condescension has conferred upon me, that I convey to you the refuge of my arms in fleeing the fiery doom which now, with crimson wing, o’ershadows us.

Other material in the boarding house is to be rescued in the following order:

Arbitrary introductions, made under fire, to 12s through the necessity of carrying them out of the conflagration, are not binding. It rests with the young lady to renew the acquaintanceship or let it drop. If she shall desire the renewal, she may so signify by postal card; by intimation conveyed through a friend or family; or by simple recognition of operator, by smile and slight inclination of head, the first time she meets him after the fire. In the resulting conversation the young gentleman must strictly refrain from introducing the subject of fire, or indeed of combustibles of any kind, lest he may seem to conceive and remember that he has lately done a heroic action, or at least an action meriting complementary acknowledgment; whereas, on the contrary, he should studiedly seem to have forgotten the circumstance, until the young lady shall herself – if she so please--refer to it; in which case he will bow repeatedly, smiling continuously, and accompanying each bow with the observation (uttered in a soft, apparently embarrassed, yet gratified voice) “’m very glad, ‘m sure, ‘m very glad, ‘m sure”.

Offers of marriage to parties who are being carried out from a boarding house on fire are considered to be in questionable taste, for the reason that the subject of the proposition is not likely to mistress of her best judgment at so alarming and confusing a time, and therefore it may chance that she is taken at a disadvantage. Indeed, the most authoritative canons of high breeding limit such offers inflexibly to cases where the respondent is a No. 2. In these instances, the following form should be observed:

Form of Offer of Marriage from Young Gentleman to a No. 2, during Process of Extracting Her from Boarding House on Fire, and Conveying Her out of Same in His Arms.

Ah, I supplicate, I beseech, I implore thee, dearest [here insert given name of party only], to have compassion upon thy poor kneeling henchman [do not attempt to kneel – this is but a figure of speech] and deign to be his! Deign to engender into bonds of tenderness those bonds of chill conventionality which enfold us in their silken tie, and he will ever bless the day thou didst accept the refuge of his arms in fleeing the fiery doom which now, with crimson wing, o’ershadows us.

Enough has been said, now, as to the conduct which a young gentleman of culture and breeding should observe in the case of a boarding house on fire. The same rules apply, with but slight variations (which will suggest themselves to the operator), to fire in a church, private house, hotel, railway train, or on shipboard – indeed to all fires in the ordinary walks of life.

The speeches to be used at a fire may also, with but slight alteration, be wielded with effect upon disastrous occasions of other sorts. For instance, in tendering rescue from destruction by hurricane, or earthquake, or runaway team, or railway collision (where no conflagration ensues), the operator should merely substitute “fatal doom” for “fiery doom”; and in cases of ordinary shipwreck or other methods of drowning, he should say “watery doom”. No other alterations are necessary, for the “crimson wing” applies to all calamities of a majestic sort, and is a phrase of exceeding finish and felicity.

Observe, in conclusion: Offers of marriage, during episode of runaway team, are to be avoided. A lady is sufficiently embarrassed at such a time; any act tending to add to this embarrassment is opposed to good taste, and therefore reprehensible.