I’VE JUST HEARD an incredibly wonderful, enjoyable Christmas album, and if you’re as weary as I am of the shopping-mall treacle that annually assaults our ears, you’ll want to hear it, too. Be warned: it’s built around a dynamic big band playing new arrangements that hearken back to the classic decades of such bands. It’s the brainchild of guitarist Glenn Crytzer, a young virtuoso steeped in those traditions, and he ices the already lavish cake with original holiday numbers that are better than anything else that has tried to muscle into the repertory lately. 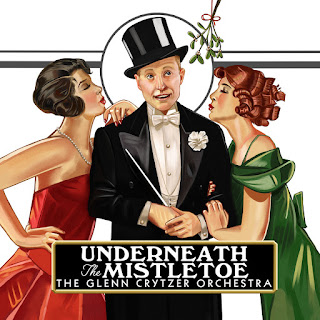 “Underneath the Mistletoe” is a 20-track collection placing those eleven originals alongside some unusual but brilliant choices of companion, all arranged by Crytzer for his 24-piece band. We get a good taste of what’s to come as a lively version of “Over the River and through the Wood” kicks off the disc, showcasing a tight five-man sax section, but it’s the second cut, Crytzer’s title song, that welcomes the eight-piece string section and gives the truest feel of the unique, swinging feel of the disc.

To say that it seems as if Gordon Jenkins just walked into the room is to pay Crytzer a high compliment. He really shows off his arranging skills here, with a deft integration of those strings (great pizzicato moment!) amidst the brass and reeds – and Hannah Gill puts over the witty lyrics with a sly smile and warmth in her voice.

The band is made up of some of New York City’s finest jazz performers, most of whom show their chops in solos along the way, such as the fine work of trombonist Rob Edwards in that title song. Crytzer’s arrangements take the band on a voyage through a number of vintage stylings, each inspired by some characteristic of the tune at hand, while leaving plenty of room for the solos to shine through.

You may not recognize “Deck the Halls” at first, but it fits well to a classic Big Band arrangement recalling, as Crytzer explains in his excellent liner notes, the bands of Miller, Lunceford, and Goodman. I’m hearing the ‘20s band of Irving Aaronson in “Tea,” Crytzer’s version of Tchaikovsky’s Nutcracker’s “Chinese Dance,” until Mike Davis – a protean player if ever there was one – swings out on cornet. Not to be outdone, Jason Prover turns in a blazing trumpet solo on “Jolly Old Saint Nicholas.” “Silent Night” gets turned into a skating-rink waltz, and there’s a little freilach flavor for clarinetist Dennis Lichtman on “The Dreidel Song.”

And there are more vocals. The ebullient Dandy Wellington is turned loose on two Crytzer originals: “I’m Sorry, Santa Claus” and “All I Want for Christmas Is Food,” both of which are reminders that there’s room in the holiday-song repertory for numbers that are witty without being tasteless, and which serve to keep the variety of this album flowing.

Crytzer takes some of the solo vocals with a Bing-influence croon; especially nice is work on his original “It’s a Wonderful Life,” which, as he points out, is intended to capture the spirit of a movie that was slow to gain success. The song does just that. Glenn is also part of a vocal trio, reminiscent of the Merry Macs, that adds just the right flavor to numbers like his own “An Old-Fashioned Christmas” – and the singers are also the solists: Ricky Alexander has an alto sax sequence, Davis returns on trumpet, and then Crytzer shows off of his formidable guitar skill.

I can hear Rosemary Clooney warbling Crytzer’s “Christmas in New York,” which is meant to take away nothing from Glenn’s own deft old-fashioned vocal technique, also on display in the unabashedly sentimental “The Little Tree.” “I’d like to think that if Bing were still around, he’d have wanted to sing this one,” writes Crytzer, and I have to agree.

But it’s Glenn’s “Playing Santa Claus” that sounds to me like an instant classic, a song bursting with a spirit of generosity that’s all too rare in this repertory. Hannah Gill’s vocal is again perfectly suited to the song’s wonderful feeling, and she’s the right voice with which to end the album, with even more unabashed sentiment. Against the soaring harp of Kathryn Andrews, “Keep a Little Christmas in Your Heart” reminds us that “The world’s gone mad we’re tumbling down a slippery slope,/But each year winter brings a single glimmering hope:/That this Christmas may be merry, but in January/Each of us will do our solemn part.” There are many more pleasant surprises to discover on this disc (or download), but isn’t that a nice place to leave it? You can find the album here.

Underneath the Mistletoe
The Glenn Crytzer Orchestra
GCOSwing.com

Sounds glorious. I will check it out. Always love your creative and fun commentary.