THERE’S A PLAINTIVE QUALITY to the Florence Reece song “Which Side Are You On?” that’s also touched with purpose – which isn’t surprising, considering the song’s very clear origin. Reece wrote the lyrics in 1931 after a night in which a group of gun thugs terrorized her and her children as they searched (unsuccessfully) for her union-organizer husband. She drew the melody from her memory of a song that probably was an old “Cruel War”-type ballad titled ”Jack Munro,” which used, for its refrain, the melody of a song titled “Lay the Lily Low,” which may be a Baptist hymn. 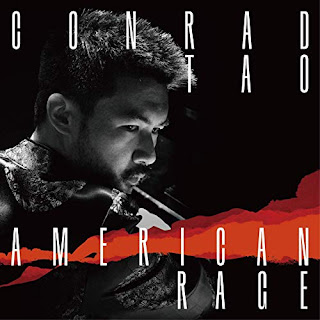 All of which is to say that by the time Frederic Rzewski got hold of the tune, it already had been through many changes. It has endured these many decades because the lyric poses a direct and meaningful question, while the stepwise nature of its accompanying refrain has an engagingly hypnotic effect. Rzewski created a set of variations for solo piano as part of his four-song “North American Ballads” collection, and this is the kick-off to composer-pianist Conrad Tao’s new album “American Rage.”

The audacious title of Tao’s recital is well chosen. The U.S.A. is a country founded on dissatisfaction, and, for each successive generation, the vaunted pursuit of happiness has called forth conflict. But, as Paul Robeson observed, “The artist must take sides,” and our history of musical polemics has landed some of those artists in tetchy situations.

Aaron Copland, for example. His crowd-friendly ballet scores made him a darling of the summer-lawn-concert set, many of whom would be distressed to learn of Copland’s communist sympathies during the 1930s, a background that gave him, in 1953, the dubious honor of being questioned by Joseph McCarthy and Roy Cohn, in an exchange of such self-righteous political maneuvering on the part of the senator and his counsel that it would fit right in with today’s impeachment hearings. But Copland, like fellow fellow-traveler Pete Seeger, insisted to the committee that his mission was only to make music, proving Woody Guthrie’s belief that “Any song that fights for the cause of the workhand is a communist song to the rich folks.”

Julia Wolfe, the youngest of the composers represented here, has shared a keen since of American history in her works, particularly in pieces like her Pulitzer Prize-winning “Anthracite Fields,” an exploration of Pennsylvania’s coal-mining history, and “Steel Hammer,” a theater piece based on the John Henry legend.

She had a ringside seat for the defining moment of America’s entry into the 21st century, living but a few blocks from Manhattan’s World Trade Center, and she wrote the seven-minute piano piece “Compassion” as a reaction to that event. It’s the emotional core of “American Rage,” an angry ballad that grounds a series of emotional outbursts to a searching minimalist sequence, before ebbing, during its final minute, into a sense of quiet resignation. Tao’s performance is crisp and passionate, with the virtuosity necessary to navigate the work but without any unneeded affect.

And the quiet finish of the piece sets the stage for the final work on the recording, Rzewski’s “Winnsboro Cotton Mill Blues,” a piece that opens with an ominous rumbling that may well be a mill, growing louder and more plangent before subsiding into repeated figurations that soon underpin a series of melodic reckonings. The melody of the song itself emerges only gradually, eventually taking on a high-spirited bluesy aspect before being sucked back into those seemingly endless mill noises.

It has become a popular competition piece, and is, in its way, a theatrical spectacle as well – but it leaves you with the troubling message of the song at its heart, even if you’re unfamiliar with its lyrics, and Rzewski’s treatment underscores those troubles.

Pete Seeger appears again, this time as a friend of the composer, helping him choose the four songs that would make up the “North American Ballads” set. Rzewski has long been willing to weave his social conscience into his music, and Tao’s performances of both these pieces is masterful. Again, he has the skill to navigate the score without turning the music into melodrama. I’d like to hear him tackle Rzewski’s greatest work, the variations piece “The People United Will Never Be Defeated.”

While there may be less of an overt political identity to Copland’s Piano Sonata, the very act of writing it was a statement of purpose, a turning away from the style of pieces like “El Salón México” and “Billy the Kid.” The three-movement sonata, finished in 1941, is more accessible than his Piano Variations of a decade earlier, but it still opens a challenging path. It mirrors  “Winnsboro Cotton Mill Blues” insofar as it takes a tripartite journey to a quiet end, but it compels us with a lyricism of a different time, as much a picture of the American sound of that era as the likes of Glenn Miller.

I can’t praise Tao’s programming here highly enough. It’s ambitious and satisfying, and its message remains vital. It’s through the arts that we find pathways away from the messes we make for ourselves, and this recording takes you by the arm and sings you inspiration.

Conrad Tao
American Rage
Warner Classics
Posted by B. A. Nilsson at 10:16 PM