From the Vault Dept.: I wish I’d bothered to note just who it was I shared a table with at Caffe Lena seven years ago, on the night when I attended a performance by guitar wizard Paul Geremia. Seeing him perform that night was a long-awaited follow-up to an after-hours encounter with him that I wrote about here, and well worth the wait.

IF I WERE INCLINED to doubt the veracity of Paul Geremia’s tale of a private lesson from Howlin’ Wolf – a lesson that took place in Geremia’s condemned Brookline flat, in which the only furniture was a bed, on which he learned a Charley Patton song from Wolf, who’d learned it from Patton himself, the legend-upon-legend stuff piling up – as I say, were I inclined to doubt this, any skepticism was blown away by the discovery that I was sharing at table with a man who’d been babysat by Billie Holiday. The world works this way. 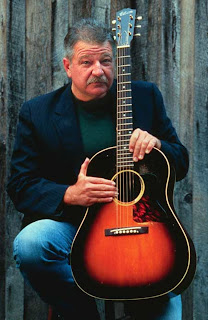 Blues singer-guitarist Geremia made his annual Lena stop last week with six-string, 12-string and harp rack, fighting a nasty head cold but nevertheless so at home on the tiny stage that the occasional head-clearing pause seemed perfectly apposite.

He’s one of a handful of acoustic performers linked by personal contact with the blues and folk traditions of this country’s past, and he’s as likely to be talking about Eddie Lang as about Blind Blake.

And talk he does, giving marvelously informal sketches of the provenance of particular pieces. As when he eased into Skip James’s “Special Rider Blues” (not, he explained, to be confused with Little Brother Montgomery’s “No Special Rider”), describing the southern turpentine camps that were part of a musician’s circuit. Then a lengthy intro on the 12-string, the tune touched with a pentatonic feel and always returning, as the vocal began, to a throbbing minor third.

Geremia switched to the six-string for a succession of blues (or at least bluesy) numbers, in which Robert Johnson’s “From Four until Late” took us to Blind Blake’s jaunty “Hey Hey Daddy Blues” and then “Lost Mind” by Percy Mayfield, whom Geremia named as his favorite songwriter, with blues harp obbligato. And then “Pony Blues,” the aforementioned Patton song, itself a compelling amalgam of ideas and phrases that permeate the earliest blues.

The harmonic changes of “Drown in My Own Tears,” a Ray Charles hit, are unique enough to make the journey through Geremia’s extended solo the more compelling, and it was one of the high points of the concert. And it was all the more striking because Geremia made it seem like something he does every day, something he’d play for you if you showed up in his living room.

Just when you think you’re getting used to his guitar wizardry, he pulls something else out of his arsenal, as when he kills it with bottleneck during Buddy Woods’s “Don’t Sell It, Don’t Give It Away” or snaps the bass line of Patton’s “Love My Stuff.” Fortunately, he’s not slavish to everything about his forebears. His guitar style has absorbed much (and absorbed it from the best), but it’s still in the service of a style of his own. And his singing features both character and intelligibility, often a rare combination.

He’s also a terrific songwriter. He kicked things off with the whimsical “Geremia’s Railroad,” inspired, he explained, by a Lord Buckley routine, and that right there takes us back to an almost-forgotten era. “Kick It in the Country” is a novelty blues replete with jelly-roll references, while “Wonderful Affliction” is a plaintive song he made up “while I was getting divorced,” he told us, adding wistfully, “I got two or three songs out of that divorce.”

Not surprisingly, his next number, “Meet Me in the Bottom,” included the lyric, “Woman that loves me has gone so far away/Woman who hates me, I see her every day.” It’s that kind of programming, wending through moods and styles with a cohesiveness that doesn’t reveal itself right away.

The penultimate offering of the 21-song program was a change of pace, a Calypso song
titled “Money is King” by Growling Tiger (no relation, and yet every relation, to Howlin’ Wolf), reminding us, as the fiscal cliff looms, that “If you are poor, God help you but it’s true – a dog is better than you.”

Then Geremia signed off with his own “Diggin’ Uncle Sam’s Backyard,” written in Kanarado, Kansas, he explained while fitting the right harp to the rack. A throwback Geremia may be, but there nothing antiquated about the songs or his approach to them, and the hopeful note of the last number was a perfect end to the evening.