From the Culinary Vault Dept.: Cookbooks are their own kind of ephemera, easing in and out of print as culinary fads come and go. Here’s a roundup of a few favorites that were current nearly five years ago, and which promised some cook-it-yourself delights that remain delightful. 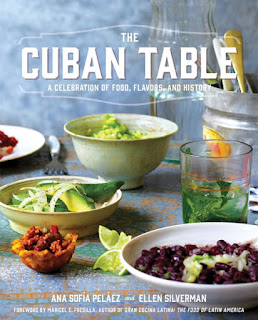 A CULINARY VACATION is cheap and satisfying, a participatory event you can do alone or with friends, an excursion that immediately pays off with a tasty meal. Cookbooks are my way into such a journey, and I thank goodness my kitchen has metal cabinets, because they end up covered with magnet-affixed recipe photocopies.

Could there be a more timely book than The Cuban Table (St. Martin’s Press). Ana Sofía Peláez and Ellen Silverman have packed 320 pages with prose and photographs celebrating the island’s culinary history, giving you a sense of being right there on a Havana street ordering croquetas de jamón, which turn out to be not too tough to make. Black-eyed pea fritters (bollitos de carita) is another simple finger-food recipe that makes so much sense, while arroz con pollo a la chorrera (a masterful chicken and rice) uses beer and a bunch of savory accompaniments in a dish that will take a little while to whip up. The narrative alone is superb, then suddenly there’s a toothsome photo of oxtail in caper sauce (rabo alcaparrado), so how could you not dive in? Fifty pages of desserts include inventive fruit preparations, and there’s plenty of info about the basics of technique and ingredients to master this country’s cuisine.

Putting us not far from Mexico: The Cookbook (Phaidon), the fancy pink die-cut cover of which announces this as something special. Here, at last, is the entire country laid out for us region by region, as seen by Mexican TV personality Margarita Carrillo Arronte. An overview of geography and ingredients leads to the typical chapter arrangement – salads, soups, fish, meat, vegetables, rice and beans, and more – with each chapter boasting a regional array. Guacamole covers them all (tomato is optional); smoked chile paste, which features avocado leaves, is native to Oaxaca. 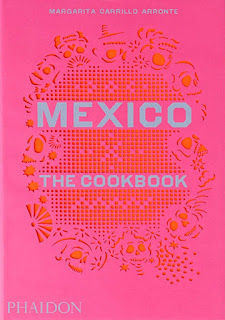 Which is also the “land of the seven moles” (that’s mole-a), a seeds and peppers-based sauce that covers a range of colors depending on the ingredients. Thus, beef in yellow mole calls for chilcostle or guajillo chiles and an herb leaf known as hoja santas. Obviously, you’ll need a good supplier. You won’t be making the duck with xoconostle sauce without xoconostles and cactus paddles, although the cochinita pibil sauce for the slow-cooked pork needs nothing more exotic than achiote paste, which you can make from a well-stocked collection of herbs and spices.

As for the main ingredient in the grasshopper tacos? You’re on your own.

Although Downtown Italian (Andrews McMeel) celebrates the well-loved cuisine, authors Joe Campanale, Gabriel Thompson and Katherine Thompson place it in the context of NYC’s West Village. They start you off with an aperitivo (several recipes, most of them silly) before hitting the antipasti, and it puts the familiar – bruschetta, grilled shrimp – alongside preparations of lemon piccata sweetbreads, charred octopus, kale with charred fennel and roasted-pear vinaigrette. Good tips for boiling pasta, nice additions with the likes of lamb Bolognese or clams and chorizo. Especially good fish recipes, too, such as branzino al cartoccio – parchment stuffed with veggies – and striped bass with braised fennel. The procedures are a bit meticulous, but that’s a good thing. You need to learn this stuff. 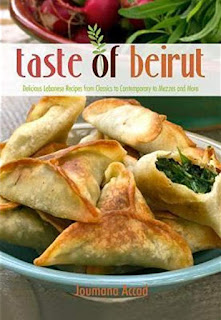 The promised Taste of Beirut (Health Communications) turns out to be a comprehensive meal – many of them, in fact – that’s a tribute by author Joumana Accad to her native Lebanon. It’s a recipe-driven collection, each one color-photo illustrated, that won me with the scarlet surprise of a preparation of beet dip (mama dallou’ah), a garlicky baba ganouj alternative. Very traditional approaches here: the garlic cream (toum), for instance, is supposed to be pounded in a mortar, although I have had success preparing it in a food processor. Alongside the necessary recipes for hummus, kibbeh (many variations!) and tabouleh are tomatoes stuffed with bulghur, grilled fish with walnut sauce, eggplant cake, breaded scallops with mango sauce – even a Lebanese approach to chicken wings featuring lemon and cilantro. Procedures are all moderately simple, with only a few slightly exotic seasonings required – but sumac, tahini and zaatar should be on your shelf already.

Although I would have liked to see a recipe collection that tied in the area’s history with the preparations, Serbian Cooking (Schiffer Publishing), by Danijela Kracun and Charles McFadden, offers an expressive variety of dishes. The 55 recipes were collected from co-author Kracun’s mother and assorted grandparents, with some additions from Kracun’s own family, and reflect a vegetarian family’s style of eating in which simplicity is a hallmark. Plum dumplings, wrapped in potato dough, immediately caught my fancy; cevapi, a sausage of pork, beef and turkey; djuvek, a stew of pork, tomato and peppers; two approaches to chicken paprikash (one with dumplings, the other in wine); stuffed peppers, and an odd tomato sauce made by combining tomato paste and a roux. Among the many phyllo dough-based dishes are burek, a flaky pie you can make with or without meat (recipes for both are given), a ricotta-based cheese Danish, potato pita, mushroom pie – and a delicious bunch of desserts. Bon voyage!