From the Theatrical Vault Dept.: O, witless youth! Here’s the young (or at least substantially younger) me carping about populist entertainment. My stage bias never sounded more keen, yet I'm having trouble making sense of the thing. It’s one of my early pieces for Metroland, from January 1985, when I was signing myself as George Gordon so as not to offend the pernickety editor who ran pieces of mine in the soon-to-fold Albany Knickerbocker News.

HIGH-TECH ESPIONAGE DRAMAS ARE fond of employing as a deus ex machina such unpredictable elements as the villain’s daughter’s amorous interest in the rugged hero. Unpredictable, that is, to the villain who, with his brilliant logic, has covered all the other angles only to stymied at the end by the “human element.” 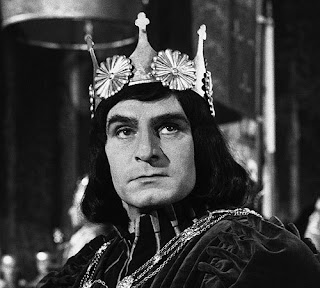 This is a somewhat flabby metaphor for what goes on onstage in the most common kind of dull production: the sets can be lavish or imaginative but nevertheless well done; the blocking superb, all sightlines accounted for; costumes and makeup first-rate – but where’s the human element? In this case, some terrific acting?

An actor’s job never has been easy.

He’s always been a “man apart” in the sense that he makes public the agonies of self-discovery through his facility for adopting other people’s personalities. A good stage performance calls for something more, however: the ability to devise a personality that will cooperate with the invented personalities of the rest of the cast.

There seems to be a number of ways to attempt to teach this. Some drama schools prefer to matriculate their actors as a company, believing that so many years spent studying together will have caused the necessary rapport; others offer more abstract studies, heavily based in improvisational technique.

All of which doesn’t recognize the villain lurking, in my opinion, in the background: movies. They’ve been the ruination of actors. They’ve at once made it easy for the actor and made the actor’s work look easy. A director can highlight a monologue with a simple close-up, cunningly lighted, or it can be contrasted with a view of another character’s face. Speech is miked; it need not be projected, and dramatic intimacy is easier. But all this makes a good actor’s work look deceptively simple: there still must be a total commitment made to the character, even when it’s just Cary Grant playing that deceptively difficult role of Cary Grant.

Interestingly, it’s usually in comedy that the director will put the camera on a long shot and let the actors do all of the work. Comedy depends on that visible interaction, with its concomitant sense of tension and release.

On the stage, a dramatic confrontation has the same setup as a kiss, so an actor can’t play as if for a close-up. Laurence Olivier, who can dominate the stage with the flicker of an eyebrow, did it the other way around in his film “Richard III”: for the opening soliloquy he turned the camera upon himself for a long, fluid take, moving himself and the camera for dramatic emphasis. But we in the audietice at a stage-play are limited: our cameras don’t do close-ups.

HARVEY FIERSTEIN’S “TORCH SONG TRILOGY” comes to Proctor’s Friday (tomorrow) for a single performance, which isn’t quite how it was conceived or first presented. The plays that comprise the trilogy – “International Stud,” “Fugue in a Nursery,” and “Widows and Children First!” –  premiered in 1978.

Over a period of six years, the complicated life of Arnold Beckoff is portrayed, with hilarious and touching results. For the tour, the plays were shortened by the author to fit them into a single evening’s how.

Heading the cast are P.J. Benjamin, who was last seen on Broadway in “Sophisticated Ladies,” and Malcolm Steward, who performed in Dracula with Frank Langella.

When “Torch Song Trilogy” debuted on Broadway, it won Flerstein the Tony and Drama Desk awards for best play and, because he himself was playing Arnold, the awards for best actor.

The Proctor’s performance will take place at 8 PM; tickets are available at the box office, at CBO outlets, Drome Sound, and Carl. Co. stores.

World Premiere at the Egg

WHILE THE REGULAR COMPANY AT ESIPA prepares for February’s Taming of the Shrew, a professional company has been assembled for the world premiere of Gail Kriegel’s “On the Home Front,” which opens Tuesday at 8 PM and runs through January 20 at the Egg.

The show describes a young female teacher who must reconcile her own harsh recollections of the Vietnam War with the prospect of instructing a class of Vietnam veterans. Kriegel, who is in Albany to assist the production, said that she’s “never seen a play of mine come together so well, so quickly.”