Trial of the “Night”

Guest Blogger Dept.: James Thurber weighed in on a subject that continues to inspire controversy, viz. the authorship of that most famous piece of Christmas doggerel, “A Visit from St. Nicholas.” The matter will be put to a jury trial in the poem’s hometown, Troy, NY, at 2 PM Sunday, Dec. 7, 2014, at the Rensselaer County Courthouse, when attorneys representing Henry Livingston and Clement Moore will square off in a re-match of last year’s inconclusively settled trial. I plan to be there in one form or another. 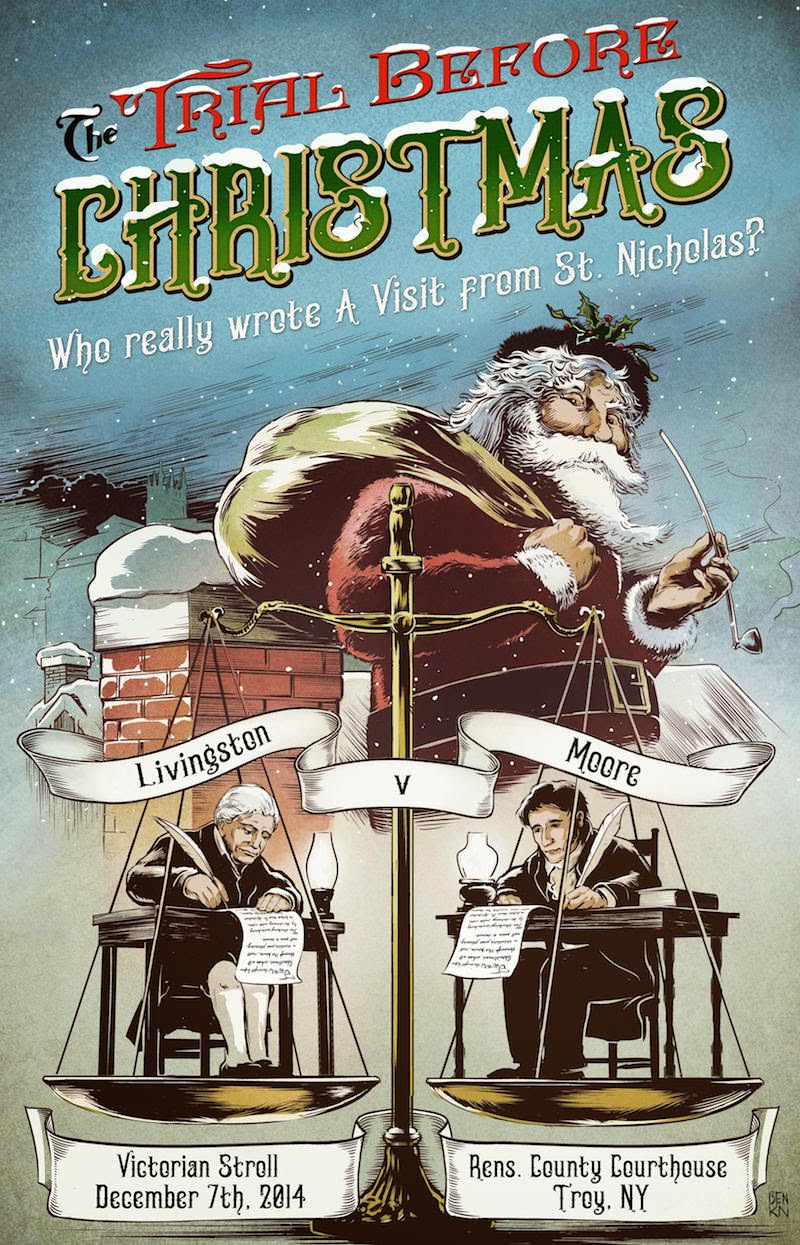 UNBEKNOWNST PERHAPS TO MOST PEOPLE, two families of this town have been arguing for years about whose great-grandfather wrote “‘Twas the Night Before Christmas.” The fly-leaf of your copy will reveal the name of Dr. Clement Clarke Moore. At the turn of the eighteenth century he lived in a big house with many chimney places, near Chelsea Square. More than eighty when he died – during the Civil War – he was buried in the cemetery behind the Chapel of the Intercession on upper Broadway. This Christmas Eve children will gather about his tomb, carrying lighted candles and singing the verses of his poem. Meanwhile, in a home on West Seventy-first Street, the household of Dr. William S. Thomas will await the coming of St. Nicholas as one of their own family. It is their contention that Dr. Thomas’ great grandfather, Henry Livingston, Jr., wrote the poem in a big house near Poughkeepsie more than a hundred years ago and read it to the family one morning at breakfast.

The story of the literary feud is interesting. Dr. Moore was a notable scholar. His father, Protestant Episcopal Bishop of New York, assisted at the inauguration of Washington and administered last rites to the dying Alexander Hamilton. Dr. Moore loved to write. His chief literary work is a ponderous book entitled “A Compendious Lexicon of the Hebrew Language.” He also liked to turn out pieces such as one called “Observations upon Certain Passages in Mr. Jefferson’s Note on the State of Virginia which Appear to have a Tendency to Subvert Religion and Establish a False Philosophy.” In 1836 he published a volume of verses. The best of the lot was “‘Twas the Night Before Christmas.” There was only one other in the same metre (anapaestic) and it was not so good.

It was long before the Civil War that the descendants of Livingston announced their claim. The story of his writing the poem has been a family tradition for a century. One tale is that a friend of the Moores in the house at the time he read it asked for a copy of the poem and introduced it later into the household in Chelsea Square. The original of the poem has never been found by either family

Mr. Livingston, a statesman and a soldier, wrote a book of poems too. “’Twas the Night” isn’t included in it but nearly half of the verses are in its metre and many of them are said to display the same tricks of expression and phrasings. No writing of his has been found claiming the authorship of the poem. He had been dead eight years when the poem appeared under Dr. Moore’s name. An interesting quirk to the mystery is that the poem first appeared in print in the Troy Sentinel in 1823, prefaced with a note by the editor saying that he didn’t know who had sent it in.

Dr. Thomas has spent years collecting documents on the subject. A literary researcher who examined his papers some years ago wrote a piece for a magazine seeming to cast the laurel on Livingston. Immediately, an aged New York lady, who up to this time had taken no part in the controversy, arose with the news that an ancestor of hers had had from Dr. Moore himself the story of how the poem was written. The moonlight on the snow of Chelsea Square gave him the idea, she said.

Footnotes, as taken from the remarkable collection of pro-Livingston information at henrylivingston.com:

“The original of the poem has never been found ... ” Multiple sources say that the Livingston manuscript was found, treasured in the family for many years, and destroyed in a house fire. There is no explanation for the lack of a Moore manuscript.

“Immediately, an aged New York lady ... ” This is the deposition of Maria Jephson O’Conor, written at the request of Casimir de Rham Moore. It was created in response to the 1920 articles inspired by William Sturges Thomas, to tamp down the authorship dispute flames. In fact, it ended up more as a possible smoking gun for the Livingston side.