From the Vault Dept.: More chaff from the back of a file-cabinet drawer. This piece has to date from early 1983, just before the marriage referenced within went pffft. At the time, I lived in Schenectady’s Stockade area, a historic district on the riverside site of the first Dutch settlement. A newsletter called The Stockade Spy was distributed to the neighborhood, and this was one of my contributions. I apologize for its nagging, holier-than-thou tone. And I do currently own a television set.

TWO YEARS AGO a person or persons unknown jimmied my front door and made off with a new color TV set. It was not a welcome loss. My wife and I were discovering the nice combination of cable service and crisp colors, as well as the fact that it was possible to be over ten years old and still fight over who’d watch what. 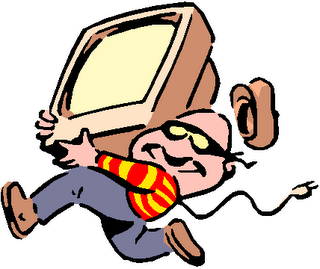 “We’ll get a new one,” I sighed, but that purchase kept getting postponed. We’re still without a TV and it now looks as if we might happily stay that way for a while.

Oh, I’m not going to go on about lousy programming, biased news geared for the short-on-smarts, that sort of thing. I don’t believe that I’ve “risen above” anything. Although it was interesting to hear the reactions our TV-less life first brought forth: “No TV, huh?” commented a friend. “Well, as for myself, I watch only the educational station and the news.”

As if it were necessary to apologize to us for even owning one of the things. “You don’t understand,” I hastened to point out. “Mine got swiped. I’d watch it if I had one.”

“We really ought to get a new TV set,” I said to my wife a few months after the tragic event, and she agreed. So we went to a department store and priced the things. Such had been the ignorant bliss of recent nuptials that we’d neglected to insure ourselves, so there wasn’t a handy fund to draw from. “They’re all so expensive,” she observed. We calculated how much we’d be saving in cable service alone and went out to dinner instead.

The next time we went TV-looking, we found ourselves in the kids’ toys department. We bought a Monopoly set and a Scrabble set, neither of us having played those in years. It was a sort of harkening-back to our own kidhood, but we discovered that both games can get pretty cutthroat. My wife, it turns out, is quite a wheeler-dealer in the real-estate biz.

“What do you people do without a TV set?” another friend asked. We looked at each other, my wife and I, and shrugged. And confessed, guiltfully, to playing board games. This intrigued the friend, who brought her husband over for a Monopoly session one night. “Kind of quiet without the TV on,” he said at one point. My wife won the game and we scheduled a re-match.

Then we got into the fancier-dinners stage. Previously, the evening meal was something to assemble quickly and consume while being TV-told of World Events. With this extra time in the evenings, I got the idea of making a “restaurant-type” meal, so we cracked a cookbook and plunged into what turned out to be a pretty fair approximation of beef Wellington, although my puff pastry needs more practice. When our friends joined us for the re-match, we fed them tournedos Rossini. “You people must have a lot of time on your hands,” they said.

This new life was not without its drawbacks: “I can’t stand it any more,” my wife announced one day. “Every time I talk to people at work it’s, ‘Did you see this? Did you see that?’ And then they see me and lower their voices, as if they’re discussing some disease I’ve got!”

My experience was the same: TV being such an important cultural touchstone, if not the only one, I was left with fewer conversational intros. I had become a greedy reader, devouring novels as once I had devoured late-night movies. But people aren’t so apt to respond to, “Did you read this... ?”

My wife did. In an effort to share books the way we once had shared TV shows, I began reading them out loud. Once we passed the embarrassed “this-is-kid’s-stuff” stage, it became a pleasurable ritual.

It’s those late-night movies I miss the most, and that’s my major reason for keeping away from the tube. I’d get no sleep. I love movies, never mind how good or bad. Of course, like all movie-on-TV-watchers, I hate commercials, so it was a pleasure to discover that a local theatre was going the revival-house route. They’ve responded to my suggestions, and I must say there’s quite a difference in the impact of a twelve-foot tall Humphrey Bogart as opposed to one who’s merely eight inches. “But you can save so much money with the new cable movie channels,” someone told me. “And you don’t have to go out of the house!” Well, I like going out of the house. My wife and I go to the revival theater, buy some popcorn, and hold hands in the darkened theater. It’s yet another of those customs we’d been losing touch with.

At this point we have no plans to buy another TV set. As I said before, we’re not making any cultural statements. It just that we’ve got all these evenings free and we’ve been discovering more and more interesting things to do with them. Come over next week sometime and you’ll find that my puff pastry’s getting to be pretty damned good.