One Batch at a Time

From the Tech Vault Dept.: What could be less fascinating than an old computer article or an old book review? Why, an old review of a computer book! Here you go.

FOR MANY BEGINNING COMPUTERISTS, batch files are an introduction to programming. They offer a reward for achieving a little DOS knowledge by automating repetitive command-line activity; even better, they provide some DOS insulation when you get into more sophisticated procedures like batch-file menu construction. 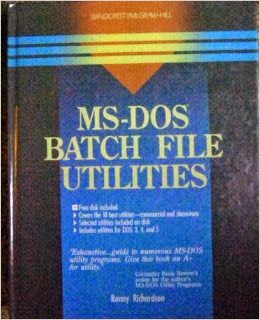 The much-vaunted DOS limitations then become obvious pretty quickly. Conditional branching depends on a weak set of IF ... THEN possibilities, and information input and output is crude and restricted.

Enterprising programmers overcome those weaknesses by writing utilities to take up the slack, and Ronny Richardson has thoughtfully searched out and collected a batch of them in a guide that describes hundreds of utilities and packs almost 200 of them on an accompanying diskette.

The most common such utility is the little ASK program that used to come with the Norton Utilities (and it’s described in this book): it allowed the batch file to ask the user a multiple-choice question and assign an ERRORLEVEL value to the response, which then sent the batch file to an appropriate branch. ASK is now part of Norton’s souped-up Batch Enhancer, but this book stresses the fact that many similar cousins exist – with greater or lesser enhancements. If the one that sounds most appealing isn’t on the enclosed disk, it’s probably on a BBS somewhere.

Richardson’s book is organized according to the different functions batch file utilities can serve. Starting off the book are descriptions of 43 ASK-like programs, which are examined briefly but with candor. Program instructions are included – presumably, reductions of what should accompany any shareware or public domain program on a README file – but they’re much handier to find in a book like this than scattered in text files throughout your hard disk, especially if you don’t use some of the utilities you collect very often.

Subsequent sections list and explain utilities that pause batch files (offering enhancements over the DOS Pause command – such as Rebeep, which not only pauses but chirps), change the way text is displayed, build menus, work more intimately with files and directories than DOS allows, and even clear the screen in a screwy way.

Many of the programs will be useful when tooling batch files for other people: utilities are provided that check for disk drives, mouse support, printer state, free memory, and even cursor position, and return ERRORLEVEL values accordingly.

The guide is meant to be exhaustive: Richardson has ferreted out every batch file utility he can find, even those with no proper copyright or author credit. They’ve been tested under various versions of DOS and recommended uses are described along with significant problems.

Although DOS-based utilities are the focus of the book, a pair of Windows batch-file enhancements sneak in for a preview in one chapter.

Where a particular utility warrants the attention, Richardson augments his description with charts and command-line options. There’s more text per page in this book than in many similarly-sized computer tomes, and the technical nature of the writing is offset by the author’s wry but pleasant sense of humor about his subject.

You won’t learn how to write batch files from this book, but Richardson offers a companion volume titled MS-DOS Batch File Programming. Similarly, the utilities guide is not something that rewards a start-to-finish read, but even a quick browse will inspire you to dream up and try some batch-file projects you never thought you could do with plain old DOS.