From the Theatrical Vault Dept.: Here’s a crazy idea – let a couple of professional area theaters get together on a production. Wait; there’s only one around here now. Ah, well. Here’s a taste of what it used to be like in the Albany area.

OUT IN MOSCOW, it seemed like a better and better idea. Pat Snyder, producing-director of the Empire State Institute for the Performing Arts, reacted to the idea of a musical version of “The Diary of Anne Frank” like so many others: how on earth do you make that work? 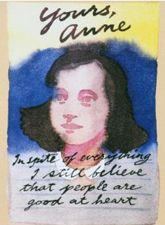 But a recording of the short-lived off-Broadway production convinced her. Trouble was, she got back to the U.S. to discover that another producing-director, just down the street (so to speak), had snagged the show already, and Bob Tolan would be bringing it into the Cohoes Music Hall as a Heritage Artists production.

Those are some of the circumstances that led to what promises to be an auspicious collaboration between the two theater groups as ESIPA and Heritage Artists combine to produce “Yours, Anne” February through March.

“We had a slot for an unannounced musical,” says ESIPA's Ron Nicoll, “and this looked like a good opportunity to expand both of our audiences.”

The Heritage Artists production, which Tolan will direct, opens at the Cohoes Music Hall February 19 and plays through the Ides of March. The production then travels to the Egg to run April 3-12.

Owing to Equity requirements, it won't be "pick up and go” move; rather, ESIPA will hire the Heritage Artists director and cast for what then becomes an ESIPA production, allowing those concerned to participate in the educational programs that are a vital part of them.

Meanwhile, Heritage Artists readies its first-of-the-year production, “I'm Getting My Act Together and Taking It on the Road,” the musical by Gretchen Cryer and Nancy Ford that examines the life story of an entertainer even as she readies her new night club act.

Heather Jones is a popular soap opera actress (as the play unfolds) who tells us her story through her songs and skits. There are conflicts in her life that we learn about – and there are the conflicts of just plain getting the show on the road.

Her manager, Joe, is trying to impose his ideas on Heather's material; but his approach is too commercial for her taste.

“Act” was first performed under the aegis of Joseph Papp and the New York Shakespeare Festival in 1978 and was an immediate success.

The Heritage Artists production is directed and choreographed by David Holdgrive, who was responsible for the just-finished (and held-over) “Little Shop of Horrors.” Another “Shop” alumnus, Steve Steiner, will be musical director.

Alice Cannon plays the role of Heather; her credits include Broadway productions of “Company,” “Johnny Johnson” and “Fiddler on the Roof.”

Previews begin tonight (Thursday) through Saturday at 8 PM; “Act” has its gala opening Sunday at 7 PM and runs through February 8.

Tickets are priced from $10-$14.50 and are available at the box office and at CBO outlets.