Playing with Bacon Dept.: Last fall I was asked to contribute a short play to a festival of one-acts on the theme of bacon that was presented Oct. 3, 2013 at the Ding Dong Lounge, on Columbus Ave. near 105th St. in Manhattan. I played the role of Will opposite a good friend and terrific actor named Libby Skala. Here’s the script of Eat Me. 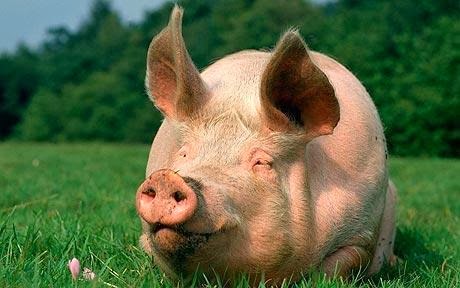 AT RISE:  SHEILA is seated at a cafeteria table with a tray of tea and a danish.  SHE reads a magazine.  WILL, who is large and unkempt, appears with a tray of stew and rolls and butter.  HE places the tray beside hers, sits, and butters his rolls enthusiastically.  HE regards his food longingly, then dives into it with messy gusto.  SHEILA is horrified.

SHEILA: You’re a pig!  (WILL looks up in alarm.)  Gross!  (SHE moves as if to leave.)
WILL: Don’t go!  Please!  I didn’t mean to offend.  I can’t help myself sometimes. (SHEILA relents and sits.)  Eat me.  (SHEILA slaps WILL’s face.)
SHEILA: You are a pig!
WILL: How did you know?
SHEILA: Look at you!
WILL: I guess it’s still obvious.  I can put on clothing, I can put on shoes – there’s almost nothing left of my tail – but I’ll never really look like one of you guys.
SHEILA: Are you – (SHE looks around.)  Is there someone who’s supposed to be taking care of you?
WILL: You think I’m crazy.  I’m not.  I’m a pig.
SHEILA: Don’t brag about it.
WILL: It’s not bragging.  I’m a pig.  You’re a person.  You’re supposed to eat me.  (HE offers an arm.) Go ahead.
SHEILA: What are you talking about?  You think you’re an actual pig!?
WILL: I don’t know what to think.  They won’t let me back in the sty.  Even my own mother . . . well.  She got turned into sausage a few weeks ago.  I figure my time is coming soon.
SHEILA: You’re a lunatic.
WILL: Please don’t go.  I’d think I’m crazy if I were in your place.  But I’m not.
SHEILA: How could you be a pig?
WILL: It’s not only me.  Look around.  That skinny guy over there with the pink face?  Salmon.  Him?  Black Angus.  I wonder what they’re eating.
SHEILA: How can they be animals if they’re human?
WILL: We’re not totally human.  We’re getting there.  The vegetarians, PETA and the other animal-rights fanatics – they inspired us.  And we figured out the best hiding place of all.  Or so the others tell me.  I don’t know.  I still feel like a pig.  You’re very nice.  Go ahead.  Eat me.
SHEILA: Eat you.
WILL: I could give you a nice crown roast.  Or a rack of ribs.  I could follow in my father’s footsteps.  He was quite a ham.
SHEILA: Even if I wanted to, I couldn’t eat you.  I’m Jewish.
WILL: Oh.  But I have cloven hooves – or I did have.  You can still sort of see ‘em.
SHEILA: You’re not a ruminant.
WILL: There’s always a technicality. (Pause.)  What about bacon?  I could do you a beautiful rasher.  (SHE shakes her head.)  I know there are Jews who eat bacon.  They say it doesn’t count.
SHEILA: Bacon is . . . still not Kosher.  Why do you want so much to be eaten?  Didn’t you turn human to avoid that?
WILL: What else can I do?  Isn’t it my lot in life, my destiny?
SHEILA: You don’t aspire to anything else?
WILL: Everything in me screams to be on that plate in front of you.  I would feel honored if you’d at least let me pickle a hock.
SHEILA: Stop!  Stop thinking like that!  Just because you come from a, a group that’s always been persecuted doesn’t mean you have to go along with it!  It only stops when you decide to stop it!  Don’t you see?  Whatever this vegetarian-peat thing is, it’s giving you a chance to lead your pigs, your people, whatever, to freedom!
WILL: That’s not me.  I mean, it sounds nice, but . . . when I think that it means I’ll never end up on a plate in front of someone as sweet as you, I feel like I have no purpose.
SHEILA: You have a new purpose!
WILL: I just want to do what my people have always done.
SHEILA: The reason my people have been able to rise above oppression is because we have such a strong sense of tradition.  You have to believe that becoming bacon isn’t the part of your tradition to hang onto.
WILL: What else is there?
SHEILA: You guys do plenty of other things!
WILL: We hunt truffles.
SHEILA: Right!
WILL: . . . and that’s it.
SHEILA: That’s a great start!  But no matter what, you can organize your fellow pigs into a coalition that refuses to be the world’s victims!  You – what’s your name?
WILL: Wilbur.
SHEILA: Oh, dear.  You, Wilbur, could be like the George Washington of pigs, leading them to freedom!  You’d be able to raise your families without fear, and your life expectancy would increase exponentially!
WILL: It’s a wonderful dream.
SHEILA: Do it!  Organize the others!  Before you know it, we’re living side by side, me and you, sharing our respective escapes from the oppressors.
WILL: I’ll do it.  You’re wonderful.  Can I ask you . . . would you like to go out with me?
SHEILA: Oh, dear.
(Blackout.)
Posted by B. A. Nilsson at 8:24 PM