From the Concert Hall Dept.: A double-feature of reviews, both of which ran on the same day. Sadly, the Brant Quintet never achieved traction as such, although those members who are still in the Albany area continue to perform in various ensembles.

WHEN INSTRUMENTALISTS GATHER in a player’s living room, they have a wealth of charming pieces available to them which mightn’t succeed in a large concert hall: duets, trios, and so on, written for every conceivable combination of instruments. 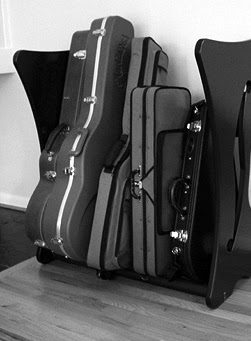 The Brant Quintet, an Albany-based group consisting of string quartet plus double bass, made its debut Thursday in the Recital Hall of the State University at Albany’s Performing Arts Center. The quintet gave us a sampling of some of that music along with a fine performance of Borodin’s String Quartet No. 2.

The group opened the program with a string sonata by Rossini, one of a group of six he wrote which are also performed by wind ensembles. The players were violinists Robert Taylor and Ann-Marie Barker, cellist Susan Ruzow and bassist David Scott Allen. It’s a tough piece filled with lovely, singing lines of melody, all of which only work when the group has a common idea of interpretation.

This is why it’s important to encourage a group such as the Brant, because chamber music benefits from ensembles which make a specialty of concertizing together.

The interplay among the musicians was very well worked out; even though there were occasional technical falterings, the overall concept came through very nicely.

Barker returned with violist Susan Nazzaro to play Mozart’s Duo in G. K 423. There are no instruments to hide behind with this piece and the players demonstrated no need to do so: the challenge is to get so good at it that the merely pretty passages sound gorgeous. Mozart’s music is filled with smiles; this performance only grinned where it could have beamed.

There also was a little too much politeness about the Borodin quartet, played by Taylor, Barker, Nazzaro and Ruzow. The opening violin theme should cry a little; the sentiment throughout should be exploited (as it was when some of the themes were lifted for the musical “Kismet”). But the Brant gave an admirable performance throughout and brought the piece to an exciting conclusion in the fast-paced finale.

It is to be hoped that this is the start of a long association and that the Brant Quintet can achieve and maintain its goal of bringing us the lesser-played but deserving works from the chamber music repertory.

IN THE MIDST OF a North American tour which already has taken them to Carnegie Hall for a successful concert, the Stockholm Philharmonic Orchestra performed at Proctors Theater, treating a small crowd to a splendid program.

It began inauspiciously with “Kontakion,” written in 1978 by Ingvar Lidholm. The orchestra has declared a commitment to playing new works by Swedish composers, which must be a nerve-wracking job. The search for a valid contemporary voice has led composers to write some pretty awful things.

On a single hearing, “Kontakion” sounds as if some of its potential appeal was sacrificed to that voice-pursuit. After a few minutes of the strings playing “let’s find the key,” it settles into the study of a plaintive theme, first by the oboe and then by other wind and brass instruments.

The thematic material was very reminiscent of Shostakovich and the piece which followed, Shostakovich’s Cello Concerto No. 1, proved there’s nothing shameful in the use of more traditional trappings.

Franz Helmerson was the soloist. His performance here last year as soloist in the Dvořák concerto proved he is equal to any of the demands of his instrument, and the Shostakovich concerto is relentless in its demands.

The first movement is a collection of mottos, lyrical and rhythmic, with the slightly out-of-breath nature characteristic of the composer. The second movement, by contrast, is very lyrical. Helmerson played it with an appropriately soulful voice. A strong sense of collaboration existed between soloist and orchestra, which made the finale that much more exciting.

The second half of the program consisted of Dvořák’s Symphony No. 6 in D. Not as well known as his last three symphonies, it nevertheless is full of the same charm and vigor. Heard often enough, it would grow on you.

Coming on the heels of Shostakovich’s gloomy essay, it’s like a great blast of a tropical breeze and it was played for all it’s worth. Conductor Yuri Ahronovitch succeeded in capturing the Bohemian flavor – and fun – which lifts a performance of any Dvořák symphony out of the realm of merely competent music making.