Where Do You Start?

Credit Where Due Dept.: Nothing sparks awareness of my superannuated sensibility more than songs – and songwriting. As a teen, I schooled myself on the standards, the enduring classics from our musical theater heritage that were written at a time when it was unremarkable for a Tin Pan Alley song to scan and rhyme correctly. Even the dreck – of which there was plenty – at least was well-crafted. Having bitched about this recently to some friends, I’m reminded that I’ve been carping like this for a long time, with proof provided by the 28-year-old review below.

STARTING HERE, STARTING NOW, a musical revue by Richard Maltby Jr. and David Shire, is a string of songs that examines love, disappointment in love, and the triumph of jaunty self-regard. 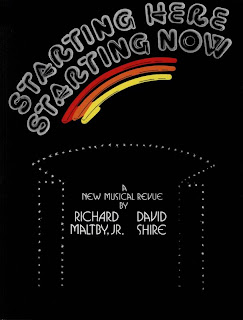 As performed by the combined efforts of the Schenectady Light Opera Company and Siena College at SLOC’s Opera House in Schenectady, it demonstrates that good performances can make an enjoyable evening out of material that never really rises above the mediocre.

The setting is a bare stage with five stools; the cast appears in costumes of black and white –  mostly black, actually, with prop hats and canes added for effect during the second half.

In taking on the subjects that the songs aim at, there is the immediate and unfortunate comparison with the 15-year-old musical Company. Unlike the latter, whose barbs were thoughtful and incisive, Starting Here becomes apologetic, cynical, wise-mouthed and smug – like a college kid in the throes of a second or third big romance.

But this, after all, a show that has, as its penultimate number, a song actually titled “Today Is the First Day of the Rest of Your Life.” And such songs as “What About Today,” which dabbles in abstractions about acting upon “today” rather than “tomorrow,” contain the mock profundity that is best closed between the covers of your college yearbook.

However, the cabaret setting is delightful, the wine and cheese are palatable and there’s no reason to pay too close attention to what’s being sung. How they do it is very impressive. Starting Here, Starting Now continues Friday, Saturday, and Sunday.