Kingdom of Swing Dept.: Clarinet wizard Ken Peplowski is coming back to town. He’ll be at Proctors in Schenectady at 2 PM Sunday, Oct. 13, with the Capitol Center Jazz Orchestra and singer Patty Barkas performing a  Benny Goodman tribute – specifically, a tribute to the famous January 1938 Carnegie Hall concert. Peps has been here before, and my review below is a reminder of why I can’t wait to see him again.

ONE OF THE VERY FEW young people in the audience approached the CD sales table during intermission, where singer Kim Liggett asked what instrument he plays. “What don’t I play!” he responded. Obviously, she knew the sad truth that the only youthful attendees would be musicians.

Clarinetist-bandleader Ken Peplowski paid tribute last week to Benny Goodman’s famous 1938 Carnegie Hall concert, with a 13-piece band of crack jazz players who more than fulfilled the challenge thus presented. From the familiar opening bars of “Don’t Be That Way” to the frenetic finish of their final encore, “Swingime in the Rockies,” the ensemble reminded us why that form of jazz called swing dominated the pop charts in the ’30s and ’40s.

It was an era of star players, with Goodman the most famous, so his incursion into Manhattan’s hallowed hall was inevitable. Drummer Gene Krupa and trumpeter Harry James were among the 1938 band members; in Peplowski’s group, drummer Chuck Redd and trumpeter Jon-Erik Kellso replicated those roles.

Although replicated may not be the best term. Goodman was no sentimentalist, Peplowski explained, so this event wasn’t intended to re-create but rather celebrate a thriving style of jazz. And there’s no question that the songs and arrangements have the staying power of good classical tunes when played by musicians like these.

“One O’Clock Jump,” for instance, was played at the 1938 concert, but Peplowski used an arrangement more in keeping with Count Basie’s style, deftly evoked by pianist Johnny Varro. But his solos – and the solos by tenor sax player Kirby Tassos, trombonist Matt McDonald and alto saxist Eric Erhardt – were in their own, contemporary but very much swing-influenced voices. You wouldn’t have heard these solos in 1938, but they sounded very much in place today. 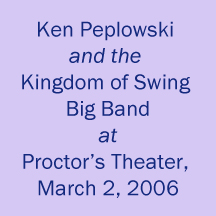 Kellso paid tribute to Louis Armstrong with a fat-bodied performance of “Big Butter and Egg Man,” and the versatile Redd switched to vibes to salute Lionel Hampton with “Moonglow,” number that brought trumpeter David Brown to the drum set, showing a sweeter style at the traps when compared to Redd’s more Buddy Rich-like declamations.

A girl singer was a big band requirement, and Liggett would have thrived in that era. frahlich section. In Jimmy Van Heusen’s “Humpty-Dumpty Heart,” she put a quiver in the word “romance” that made me melt. And she returned in the second half with a peppy “Devil and the Deep Blue Sea” and a thoroughly persuasive version of Ray Noble’s “The Touch of Your Lips.”
Breathtakingly gorgeous, she wrapped her sultry mezzo around “And the Angels Sing,” also featuring Brown’s deft impersonation of Ziggy Elman in the song’s fast

Talent and versatility were the watchwords, exemplified in the work of Peplowski, whose clarinet sound has a Goodmanesque smile and whose solos are breathtakingly virtuosic. We heard it especially in “Sing Sing Sing,” the inevitable closer to a concert like this. Goodman played it many different ways, and Peplowski shortened the orchestral portion to showcase trumpeter Wes Orr’s stratospheric playing and to give Redd a chance to really hold forth in a long, dynamic solo that, were the audience young enough to do so, would have prompted them to leap to their feet.

This kind of show shouldn’t just be an old-folks assembly: Peplowski and company proved that the music lives for the ages.