A Bone to Pick

Personal Narrative Dept.: In the summer of 1972 I was sixteen years old and desperately in love, or so I termed the infatuation that consumed me. Carol was my obsession, my dream, my goal, my despair. She also was my friend, although I didn’t realize it at the time. She suffered me a couple of dates but declined the romance component. This particular day started as sunny and hot in the morning and only got hotter, which I perspired off as I bicycled the five miles from my house to hers. A trip I made in order to “accidentally” show up at her door, which she graciously indulged by walking with me for a while, carrying on a conversation she deftly steered away from my whiny attempts at professing adoration. 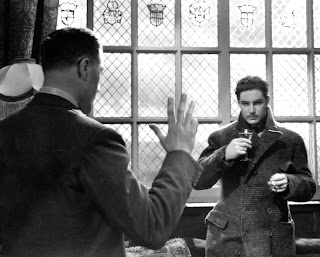 She had to leave for work at noon. As I pedaled back towards town my frustration at not being able to stake a solid claim to her heart was mitigated by the joy of just having been able to walk with her along the pleasant, tree-lined street. When I reached Ridgefield center, my infatuation had rebounded to full strength. I was insufferably happy.

Town Hall stands at the crossroads of Main Street and Bailey Avenue, and the low brick wall that separated the building’s patio from the sidewalk was a favorite hanging-out place. I met a schoolmate named Dave Gehly and we decided to wander in search of lunch – but he had a great idea to pursue first.

“Do you know Harry Thomas, the blacksmith? He’s got a great shop to hang out in.”

A blacksmith? In 1972? Dave led me up Catoonah Street, which, like Main Street, was flanked with strips of stores. Beside the town’s fire department, however, was a ramshackle building I’d barely noticed before, and stepping inside it was a dramatic step back in time.

It was dark and high-ceilinged, with a row of horse stalls. It smelled like the decades of horses that once had visited the place. It sported an anvil, hammers, tongs, and other tools of the blacksmith’s trade. An old man emerged from the gloom, dressed in greasy coveralls, stooped and halting in his walk.

We learn from the Ridgefield Press, the town’s newspaper, for which editor Jack Sanders has compiled biographies of area notables, that Harry was born in Ridgefield in 1884, “a fifth-generation descendant of Benjamin Stebbins, who built a house on Main Street in 1714 that became a hospital in the Battle of Ridgefield and stood where Casagmo [a condominium development] is now."


At 16, he began his apprenticeship, and became probably the town’s leading blacksmith through the end of the age of the horse. In a pinch he could shoe and harness a horse in seven minutes. Harry Thomas was a man of strength, not just in his arms, but legs – he thought nothing of walking to Norwalk or to Brewster and back, and did it often.

In 1927, he built the house still standing between the firehouse and post office, and his blacksmith shop out back, also still standing. When the automobile took over from the horse, he went to work for Gilbert and Bennett in Georgetown, but on retirement, fired up the forge again for fun and for special projects that still required a blacksmith.

And so this 88-year-old man talked about it. He recalled people he’d met and horses he’d shod, and I would have been paying a lot more attention if I hadn’t had Carol on my mind.

My attention was grabbed, however, by an anatomical feature he soon shared. “Horse kicked off the end of my finger,” he said, extending his left arm. The top inch of his index finger was missing. As he described the accident, I studied what was left with horrified fascination. The skin had long since closed over the top of the wound, but a little knurl of bone still poked through. And it was the pearly, clefted end of the bone that I couldn’t take my eyes away from.

Heat and hunger were closing in on me, and the barn now seemed insufferably oppressive. I edged toward the doorway in the vain hope of a breeze. Soon I was wheeling my bike again on the tree-lined pavement of Florida Hill Road with Carol strolling beside me, happiness again complete.

It was a dream – I knew that – but my sense of it was confused because I didn’t see my bedroom ceiling when I opened my eyes. Above me was sky and clouds, eclipsed suddenly by the shocked-looking face of a very old man.

“You all right?” he shouted, and Dave was at my side, helping me sit up. I took stock of myself; everything seemed okay. I’d never passed out before, so I didn’t know what to compare it to.

“That was scary!” Dave said. “One minute you’re standing there, the next you went stiff as a board and keeled over. And you just missed hitting your head on that concrete!”

They helped me back into the horrible-smelling barn and Harry found a glass of warm, unpleasant-tasting lemonade for me. Soon enough Dave and I were back on the street in search of that lunch, and I regret that I never visited the blacksmith again. He died a year later.

In researching this piece, I found this clip from the Norwalk Hour, another area newspaper, dated Aug. 24, 1925:


An accident as painful as it was peculiar deprived our village blacksmith, Harry Thomas, of the index digit of his left hand Friday, while he was shoeing a horse at his shop in Catoonah Street. His hand happened to be resting on the floor as he let the horse’s hoof down from between his knees, and one of the newly sharpened calks landed squarely on the forefinger, severing it as cleanly as if it had been done with a knife. Medical aid was summoned and the wound dressed.