Guest Blogger Dept.: It’s George Ade time again. Here’s another one of his Fables in Slang. They appeared originally in the Chicago Record, and the first published collection was issued in 1899, from which this one originates. Illustrations are by Clyde J. Newman.

ONCE UPON A TIME there was a slim Girl with a Forehead which was Shiny and Protuberant, like a Bartlett Pear. When asked to put Something in an Autograph Album she invariably wrote the Following, in a tall, dislocated Back-Hand: 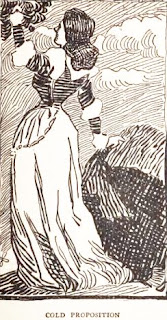 “Life is Real; life is Earnest,
And the Grave is not its Goal.”

That’s the kind of a Girl she was.

In her own Town she had the Name of being a Cold Proposition, but that was because the Primitive Yokels of a One-Night Stand could not Attune Themselves to the Views of one who was troubled with Ideals. Her Soul Panted for the Higher Life.

Alas, the Rube Town in which she Hung Forth was given over to Croquet, Mush and Milk Sociables, a lodge of Elks and two married Preachers who doctored for the Tonsilitis. So what could the Poor Girl do?

In all the Country around there was not a Man who came up to her Plans and Specifications for a Husband. Neither was there any Man who had any time for Her. So she led a lonely Life, dreaming of the One—the Ideal. He was a big and pensive Literary Man, wearing a Prince Albert coat, a neat Derby Hat and godlike Whiskers. When He came he would enfold Her in his Arms and whisper Emerson’s Essays to her.

But the Party failed to show up.

Often enough she put on her Chip Hat and her Black Lisle Gloves and Sauntered down to look at the Gang sitting in front of the Occidental Hotel, hoping that the Real Thing would be there. But she always saw the same old line of Four-Flush Drummers from Chicago and St. Louis, smoking Horrid Cigars and talking about the Percentages of the League Teams.

She knew that these Gross Creatures were not prone to chase mere Intellectual Splendor, so she made no effort to Flag them. 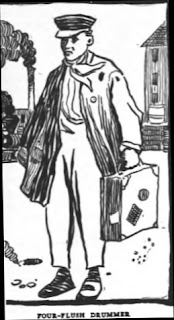 When she was Thirty-Four years of age and was able to recite “Lucile” without looking at the Book she was Married to a Janitor of the name of Ernest. He had been kicked in the Head by a Mule when young and believed everything he read in the Sunday Papers. His pay was Twenty-Three a month, which was high, if you knew Ernest.

His Wife wore a red Mother Hubbard all during the Remainder of her Life.