Cool & Strange Dept.: One of the most delightful magazines to which I’ve contributed was Cool & Strange Music, the brainchild of Dana Countryman, and which unfortunately came to an end after he entrusted it to a colleague. Here are two reviews I wrote for its eleventh issue, only one of which was published. 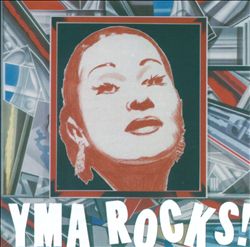 FOLLOWING A STRING of successful records that showcased the melismatic Ms. Sumac’s wordless vocalizings against tracks of lush exotica, her 1971 reunion with arranger/keyboardist/composer Les Baxter added a new component to the mix: a rock beat.

“Yma Rocks” wasn’t about to unseat any of the contemporaneous rock bands, because at the heart of it were those shimmering vocals, all five octaves’ worth, that are a style all their own, the accompanying beat notwithstanding.

But that beat does offer a unique counterpoint. Sumac and Baxter worked together on the 1950 “Voice of the Xtabay,” for which Baxter led this orchestra. For the “Rocks” sessions, he put together an ensemble made up of guitarist Chuck Cowan, drummer Skippy Switzer, organist Richard Persons, and bassist Roger Cowan, with Baxter providing additional keyboard support.

Originally issued on a ten-cut LP as “Miracles,” the recording resurfaced in CD form a while back, but “Yma Rocks” adds two previously unreleased tracks. Thanks to the work of original producer Robert Covais, this also has a fresh mix, working from original session tapes. Best of all, it has “El Condor Pasa,” through which Yma hums and chirps and yodels and still sounds better than many an articulate vocalist who’s tackled this song.

Baxter penned the rest of the tracks, no doubt with Sumac, in her customary way, fleshing out the vocals. The combo really hits its stride in “Medicine Man,” featuring a more driving beat than the other tracks and even gives us Yma overtracked with herself. This cut also makes clear that the musicians are very good – Cowan’s guitar work is very impressive. Elsewhere on the album we’re reminded that what passed for hipness in the early ‘70s grew dated pretty quickly.

But Yma maintains a hipness all her own (witness the use of her music in “The Big Lebowski”) and this is vital addition to the enthusiast’s collection.

SHE DANCES ON THE animated cover, but it’s a cheesy animation. Which fits the era of Bettie Page (she was Betty in the ‘50s, but signs her name differently today). Pinup and early Playboy playmate, Page of the jet-black pageboy bangs romanced the camera as few models could before or since, and, clothed or not, exuded sensuality. 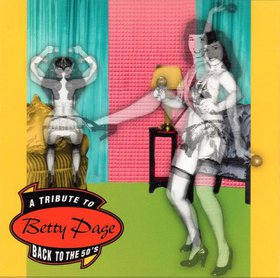 Such icons need to be rhapsodized with music. Bettie Page set our young hearts throbbing, if heart is the word I’m after, and the music assembled on this compilation disc certainly matches that passion with a driving beat.

Rockabilly guitarist Danny B. Harvey’s “Striptease” and “Teaser Girl” remind us that rock and roll is (literally) synonymous with sex; this onetime Joe Pass student blazes forth with no-holds-barred evidence.

Paul Hofner of the British sorta surf/indie rock band Gretschen Hofner claims Bettie Page as a personal talisman, discovered while he was working on a film about televangelists. Hence his celebratory “Betty Page is Back,” offered in two different-length versions on this album.

Elder statesman on this disc is guitarist Chris Spedding, a British-born skiffle nut who went on to session with Elton John and Shirley Bassey, among many others, and turned down a spot with the Stones. His “Hey Miss Betty” dates back 20 years, but it’s the most good-humored track here. And there’s more British rock from Bob & the Bearcats (“Queen of the Curves,” from their “High Heels and Homicide” album).

“Teaserama,” an instrumental from the group ’57 Incident salutes one of Page’s sexploitation movies, and the album is rounded out with “Betty Page” and “Mystery Girl” from the Blue Devils.”

So: Is this an honestly felt tribute or just an excuse to slam together a few hard-driving cuts? In Page-land, you don’t worry about such distinctions. It’s there. Collect it.