The Art of Dining

Communal Feed Dept.: Twenty-one years later, I stand by most of the advice rendered below, but I think we have a fine-dining populace these days that’s way more hip than my coevals.

LISTEN TO AMY VANDERBILT for a moment:


. . . . When a woman is accompanied by a man, it is always assumed that the man is the host and he is expected to do the ordering (except at lunch when she may give her own order to speed the service) after the woman has had a few minutes to look over the menu presented to her by the waiter ... She chooses, preferably, the table d’hote – the meal in which everything is included in the price of the entrée – and says what she will have, beginning with the first course if there is no extra charge for it . . . 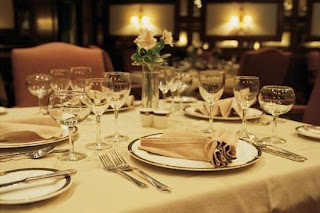 Remember: this is from a woman who met her end by walking out of a high window. But she did it correctly.

Although this nonsense still may be carried on by rich people with three last names and officious Republicans, the rest of us should rejoice that dining out no longer need be an affair calling for a straitjacket and tie.

With the fade-out of snotty ritualism, we are left uncomfortably on our own where good behavior is concerned. There’s a dining-out myth that’s been making the rounds in recent years that shamelessly exploits the “customer is always right” cliche. It supposes that a guy with the price of a meal in his hand is entitled to behave as lunkishly as he pleases just because he’s paying for it. It’s about as far in the other direction from Amy Vanderbilt as you can get.

And it’s really not necessary.

If it’s a truth that good behavior begins at home, then based on the evidence of many years of professionally dining out – and many years before that working in the trenches as waiter and cook – there are a lot of badly-behaved households.

My recent suggestion that misbehaving children should be barred from fine-dining establishments was met in these pages with a few howls of self-righteous scorn, although one of the angry moms made a good point in an otherwise misguided letter: too many people, regardless of age, obviously lack reasonable training in restaurant-behavior skills. What’s missing?

Let’s start by defining restaurant categories. For fine-dining, you visit a white-linen restaurant, a term of the trade that suggests a house where decor and decorum are important parts of the dining experience. Better hotels have white-linen restaurants; they’re naturally more expensive and it’s assumed that you’ll linger longer over your meal.

The horrible experience known as “family dining” is not a part of the white-linen milieu. In fact, you’re probably going from white to checkered (if there’s linen at all), and you may get a bonus of paneling on the walls.

These are the restaurants that aren’t selling atmosphere, but which may offer you a terrific proletarian meal. Your bustling neighborhood barroom/restaurant falls into this category, as do many tourist-resort dining halls.

From there it’s a short drop to the realm of cafeterias and fast-food. The only category below that is the grim territory of Thruway rest stops.

To consider dining as an art, we’re pretty much restricted to the white-linen eateries. Although it would be helpful if such places offered instruction, it’s rather like appreciating opera: you should spend some time picking it up on your own before buying tickets to the Met.

My first rule of behavior is wonderfully simple: Be prepared to enjoy yourself. Which carries subsidiary messages like Don’t be intimidated and Go with an open mind. It’s a trip that none of us can afford to take very often, so make the most of it.

When I was a waiter, there was nothing more depressing than to place a nicely-prepared plate in front of a drunk. Even one shot of hard liquor numbs your palate; more than one and you might as well eat peanut butter for all you’ll be able to taste. Hence the second rule: Don’t booze it up.

And a segue to rule three: Order some wine with supper. Don’t be intimidated by the list. Ask for a recommendation – that’s what a good server is for. Try something local. If you’re dining around here, insist on a New York wine. Don’t worry if it’s low-priced. Wine is a food that produces a wonderful chemical reaction with the meal. And it’s good for you.

Learn about the menu. Again, put the server to work. This person stands to make an additional 20 percent over the already-high check. The restaurant management should be providing ongoing training in the food and wine that’s made available. Let your server guide your choices – and try something different. Forget about steak.

Fifth on the list is surprisingly neglected. Discuss the meal with your tablemates. Compare notes on the wine and food. Nobody’s right or wrong, but considering the opinion of others can be enlightening. That’s why you’re reading this.

Here’s a two-part idea. Sixth: Give the house a chance. Things go wrong in restaurants. Anyone who’s worked the floor has had the wretched experience of seeing one poor party get treated poorly or even neglected thanks to a run of bad circumstances.

But seventh: Don’t be cowed into submission. If things are going wrong for you, speak to someone about it, quickly and quietly. The management of a well-run restaurant will be grateful for your responsiveness, and if they’re at all wise to the business they’ll make it up to you in some pleasing manner.

Eighth has very personal roots. Tip generously. Twenty percent. No less. A little more if it went very well. I’m as sorry as you are that we’re slaves to this antiquated system, but it is a luxury to be waited on by a professional.

If only number nine went without saying. But here it is: Try to behave with some gentility. Don’t shout, run around, monopolize the servers or try too hard to impress your guests. Don’t smoke – it’s a stupid thing to do around food.

And finally, the one you’ve been waiting for. Leave the kids at home. Despite the recent mail, it’s not a debatable point. If you have exceptionally well-behaved kids, fine. Bring them along. If I’m there I’ll compliment you and the children.

But it’s selfish and unfair to thrust your overactive progeny into the world of white linen and maitre d’s. Unfair to the kids, who get shushed and scolded for reasons they don’t understand, and unfair to the other diners who came out hoping for a civilized, relaxing experience – probably paying dearly for both babysitting and dinner.

I was baffled by the self-righteousness of these outcries I read recently, until I realized the source. Not too many years ago a generation of self-absorbed people announced their parenthood to the world with the useless display of car-window signs. This “Baby on Board” business had nothing to do with babies: it was a boastful indulgence of bratty young moms and dads.

Now we’re faced with a gang of hostile ten-year-olds who spent their infancy in knapsacks, worn like so many junior achievement badges. They’re the ones we see misbehaving in restaurants. Nobody will babysit these brats.