Mind Your Body Dept.: A self-explanatory piece I wrote for Metroland’s 2011 Mind-Body issue. You’ll feel better after you read it.

FEELING SHITTY? SO AM I. Late middle age and a slothful life have combined to hit my body with a colorful array of aches so that I almost buzz with discomfort wherever you may touch me, like that bulb-nosed patient in the game “Operation,” only fatter. 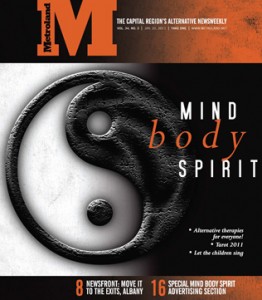 I have shopped in the several marketplaces of treatment over the years, mainstream and alternative, with, not surprisingly, varying result levels from both. For a swollen joint, I’d rather get an acupuncture treatment than a cortisone shot, but there’s a chance that I respond better to the former because I’m spending 30 to 40 minutes with (or near) a practitioner, as opposed to the wham-bam-thank you-ma’am approach of some of the orthopedic mills.

Twenty years ago, during a road trip that took me through Santa Fe, Santa Cruz and other west-coast high-consciousness burgs, I marveled at the range of alternative therapies available, even if the word “colonic” seemed common to many of them.

The Capitol Region (almost proudly, I think) keeps itself about 20 years behind what the rest of the country is doing, so it’s not surprising that many of those therapies now are available here today. You’ll find them in places like Albany's Healing Arts & Chiropractic Center, the Capital Region Wellness Center, Delmar's Center for Integrative Health and Healing and even stodgy Albany Med. Whether you’re getting quackery or quiescence is up to you, but here’s a look at some of what’s out there. In many senses of the phrase.

Many therapies branch off of our built-in energy branches, the arrangements of chakra and qi, mana or prana, that offer a roadmap of potential healing. Typically termed “energy medicine,” these practices spin off from the work of Zdenko Domančić, who, in the 1970s, studied martial arts techniques as a jumping-off point. The Ireland-based Plexus Bio-Energy System gained all sorts of recognition when Riverdance terp Michael Flatley reported salubrious results after treatment. Bioenergy (also known as Therapeutic Touch)  is represented as something that can be applied long-distance – or, more correctly, practiced by you in your own home. It’s also commended as being effective for pets, which could be challenging: my dog sees any attention as an invitation to play tug-of-war.

Like an angry schoolmarm disciplining a recalcitrant kindergartner, this one gives your disruptive energy a smackdown – albeit a gentle one, with two fingertips. It’s an organized system of tapping key energy points on the body, easily self-administered, typically performed in a specific sequence, or “round.” The benefit claims are lengthy, including alleviation of pretty much every discomfort known to humankind.

It’s not that Donna Eden has co-opted the field of energy medicine, but that she’s created a nationally based, well-organized network of practitioners with enough presence that her name often gets attached to the technique. As she describes it, it “utilizes techniques from healing traditions such as acupuncture, yoga, kinesiology, and qi gong.” And as this goes to press, she’s hosting a four-day healing retreat on Paradise Island in the Bahamas, which I kick myself (gently, on the appropriate pressure point) for missing – between energy medicine and a tropical beach, I’m sure to feel better.

If it’s good enough for Uma Thurman ... this one comes from ancient Vedic writings that suggest you can heal specific areas of the body by tuning them to the various vibrations of different stones. Rubies and red garnets, for example, are good for the heart, spleen and brain, and ameliorate hypertension, infections, fevers, a nasty temper, poor circulation, edema and lousy eyesight. And they get rid of acne. If that seems too much to remember, an emerald may be of help. Thurman is know to wear a carnelian necklace for increased vitality and happiness.

Coordinate those stones and crystals with your chakras and you’re employing a technique that has been practiced by Hopi and Hawaiians, and reported by cultures from Egypt to China. But beware the overlap with the utter fakery of so-called psychic surgery, whose practitioners often use a laser quartz wand as part of their faux-surgery toolkits. Incision-free operations are as plausible as calorie-free Big Macs.

First touted as a disinfectant, ozone therapy has adherents who claim it cures the biggies, including AIDS and cancer. A significant drawback is that it’s toxic even only in the doses needed to kill germs. Leading a chorus of condemnation is the Food and Drug Administration, which recognizes no medical applications and reiterates that the germicidal application comes at too high a health price. But the good old FDA (think: former Monsanto employees) also approved the disinfectant use of ozone for the well-heeled food processing industry.

It’s claimed to work with your immune system, and thus gets touted as a cancer-fighting agent. A localized injection is supposed to slow or reverse the growth of cancer cells. This has placed it under the microscope of scientific study, and the jury remains out, although Germany’s health regulatory agency has approved it as a palliative. No wonder I can’t find it at Christmas parties any more.

Look it up on Wikipedia and you’ll find a photo captioned “Inferior Enema kit for use during a colon cleanse.” It’s tough to be objective. Also known as colonic hydrotherapy or colonic irrigation, it’s supposed to remove that terrible buildup of rotted fecal matter in your bowels, which otherwise leads to all sorts of disease. Trouble is, medical science has yet to find such a buildup in there.

After Peggy Salinger published her not-very-nice portrait of father J.D. a decade ago (the book is titled Dream Catcher: A Memoir), she was forced to hire bodyguards to protect her from a fleet of angry proto-Holden Caulfields. But I like to think that when they learned that their favorite author practiced urine therapy for a while – yes, it’s exactly what you think it is – that they, too, tippled from their personal streams.

There are a few things in life, such as riding a steeplechase and walking on the Moon, I know I shall never enjoy. Add one more. Vaginal steambaths are supposed to treat or allay many a (as I see it nicely termed) female symptom, and what do you do? Heat a pot of herb- and oil-enhanced water, spend a peaceful 20 minutes letting its steam waft around, and try to stay warm and relaxed thereafter. I may try it anyway – I’ve got more than a few male symptoms to chase down.