BACK WHEN I WAS YOUNG and Bach was new – to me, at least – his music enjoyed a big orchestral sound. I listened to Klemperer’s Brandenburgs, Edwin Fischer’s concertos, Menuhin conducting the Orchestral Suites. 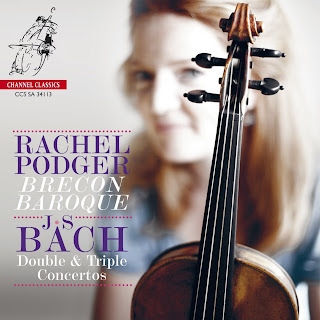 And Heifetz playing the violin concertos – the A minor and E major ones with a lean but still romantic-sounding orchestra, the double concerto double-tracked so he could perform both solo parts. His playing sounded pretty lean compared to, say, Stern or Perlman, but it turns out to have been a significant (if inadvertent) step in the direction of the period-instrument trend that soon would erupt.

Who have dominated the Baroque-and-before music scene for a few decades now, reducing the orchestral forces, changing bowing techniques and tuning, reviving the art of ornamentation and much, much more. All of which is well and good only as long as the players themselves have the talent to make the music transcendent. Two very different violinists have turned to works by Bach in recent releases, both of them radiantly justifying the historically informed performance approach.

Rachel Podger’s recent catalogue entries includes a trip through the Mozart sonatas, some joyous Vivaldi, and a disc of the better-known Bach concertos. Her newest CD collects four concertos for two or three instruments, performed with an ensemble she founded six years ago at her annual Brecon Baroque Festival.

Brecon Baroque is a ten-piece ensemble, taking it slightly beyond a one-player-per-part intimacy, well suited to the spirit of these works in which, unlike the concertos of the Classic era and beyond, the soloists typically play the tutti. Kicking off the disc is its best-known work, Bach’s Double Concerto, in which ensemble violinist (and Academy of Ancient Music member) Bojan Čičić joins Podger. Their voices are well matched, Čičić and Podger sharing more sweetness of tone than I’ve come to expect from the HIP crowd. If there’s a drawback, it’s that they blend too well with the ensemble, although that may be more about my ears and expectations – and there are marvelous moments when the soloists, heading for a solo moment, seem to blossom out of the crisp ensemble sound.

Johannes Prahmsoler joins the duo for Bach’s Concerto for Three Violins, effectively reconstructed from the three-harpsichords concerto, and, as with any ménage à trois, the alliances shift unexpectedly as various two-violin patterns are explored within the trio. 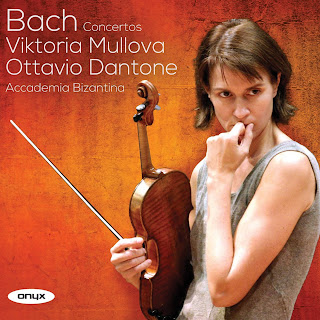 Although violinist Viktoria Mullova’s repertory actively runs from Baroque to contemporary, she has an affinity for Bach. Like Podger, she has weighed in with convincing versions of the daunting Sonatas and Partitas for violin solo, the mysteries of which tend to elude many players, and she also has chosen to include another version of the Concerto for Two Harpsichords – in this case, casting it for violin, harpsichord, and orchestra.

Otherwise, her latest Bach journey gives us the Big Two – the concertos in A minor and E major – and a reworking of the Harpsichord Concerto in E major (BWV 1053) for violin. (A note on all these arrangements: it’s well known that Bach re-arranged his own material for other instruments, so that long has been fair game.)

Mullova’s sound can be flinty and intense, almost as if she is eschewing the lyrical in order to draw our attention to the convoluted, fascinating mechanics of these works. There is an intensity to the collaboration she achieves with conductor Ottavio Dantone, with whom she recorded an electrifying version of Bach’s under-celebrated violin and harpsichord sonatas. Here, Dantone helms the 16-piece, Italy-based Accademia Bizantina in a well-balanced partnership – and the performances, which are somewhere well to the far end of lush, have grown on me through repeated listening. This wouldn’t be my only choice of recording for these works, but it’s definitely a worthy companion.