Counting on Calories Dept.: “For it’s Sunday morning breakfast time, / A time all men adore. / Why don’t the poets go into rhyme / And rave about it more?” – Cole Porter, from Jubilee (1935). I did what I could, Mr. Porter, albeit in prose.

WHATEVER HAPPENED TO BREAKFAST? It was supposed to be the most important meal of the day – according to the staff of the Mayo Clinic, it “refuels your body, jump-starts your day and may even benefit your overall health” – yet we now honor that concept by throwing carb-laden crap into ourselves or, worse, skipping the damn thing entirely. 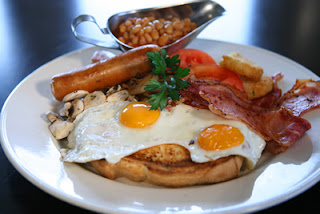 In which case, you’re denying yourself a slew of benefits that the Mayo docs go on to detail. “When you eat a healthy breakfast,” they advise, “you're more likely to eat more vitamins and minerals, eat less fat and cholesterol, have better concentration and productivity throughout the morning, control your weight and have lower cholesterol, which may reduce your risk of heart disease.”

They’re not talking about an Egg McMuffin, I suspect. Although that critter is supposed to weigh in at 300 calories, you’ve got 12 grams of fat, 260 mg cholesterol and nearly a gram of salt.

But that’s far better than my favorite breakfast, a bagel with cream cheese. I’m already sorry I’m writing this piece. Over 300 calories in the bagel alone, and add 180 for two ounces of the topping. Figuring into the breakdown are 21 fat-calorie grams and a mere 670 mg of salt. Not to mention that the whole thing sits like a lump for many hours of a sedentary morning, a mass no amount of coffee seems able to dissolve.

So what are the truly healthy alternatives? I asked Robert Cohen, author of the frighteningly plausible book Milk: The Deadly Poison, when I interviewed him in 1997. His book argues that milk’s vaunted calcium-giving benefit is a fiction and that the growth hormones wreak havoc upon us, exacerbated by the artificial hormones that had gone into widespread use.

What do he and his family eat for breakfast? “Leftover dinner,” he said.

Yet low-fat dairy remains on most of the healthy-breakfast recommendation lists, with yogurt a popular ingredient. Women’s Health magazine offers yogurt-based strawberry parfaits with muesli as a candidate which, if you’re not ready to write off dairy products and don’t add sugar, is probably as good as you’re going to get.

Leftover dinner can give you the low-fat protein you need if you have lean meat or skinned chicken sitting around. With sugarless salsa (trust me, it exists) as an accompaniment, you might get away with adding an egg or two. Or at least the whites.

We’ve been experimenting with a juicer in my house, one of those machines that turns almost anything into a liquid. It’s the best use for the bullshit peaches sold in supermarkets, if you can get past the idea of the many pesticides typically applied. I’ve learned that the idea of carrot juice is generally more enjoyable than the juice itself, but the rest of my family disagrees and laps up the stuff.

I miss the costly convenience of the corner markets New York City, where grab-and-go containers of sliced fruit are easily available. Now would be the time to lay in some melons and such to make my own compotes, if only I can summon the discipline. For one brief, shining moment, we had raspberries from the backyard, a morning meal so perfect I forget even to throw in a slice of toast.

The most pernicious breakfast enemy – the most pernicious dietary enemy – is refined sugar, which appears in many sure-sounds-healthy forms. It’s a horribly addictive substance that we fool ourselves into thinking is a morning energy source (oh, those nacreous hillocks that towered over the cereal bowls of my childhood!), yet which saps us of nutrients as the body struggles to assimilate.

All of which has made the path to breakfast more treacherous than that which leads to any other meal. Carbs. Sugar. Dairy. Cholesterol. And, if you’re lucky, bacon.

So as we waste into starvelings clutching Truvia packets to our bosoms, we can look back at the way breakfast used to be. The way it was practiced by the workingmen of Maine, as described by Robert P. Tristram Coffin in an article that appeared in the January 1949 Gourmet. Coffin, a Pulitzer Prize-winning poet and resident of Maine, attacked the subject with a gusto too often lacking these days in food writing, and his “Down East Breakfast” celebrated “a meal for men who were carving a nation out of forests and earth and mountains ... the only proper breakfast for the man with fists like mauls and thighs like young oak trees.

“ ... It must have rich, fattened, and oiled doughnuts to it,” he wrote, “heavy pies and pancakes, to keep the stomach busy; to keep the blood away from a man's brain, where it can only do mischief; to keep his blood in his arms and thighs where a good woodchopper’s or smelt-fisherman’s blood belongs, it should have bulk enough to keep the inner man busy for ten-twelve hours, say.”

At its heart, the flapjack. A wrapper for what’s also coming out of the skillet, and the diner “wraps up each cod steak or pork chop or beefsteak in one of these hot blankets of dough as he downs it.”

Getting hungry yet? Try this: “Hulled corn ... washed down cold in thick, hot molasses.” And “Cold pig's-feet standing up in the jelly of the cooled broth they were cooked in are always in good taste. A beefsteak ... fried till it is charred almost black on the outside and gets light brown only after you get two inches in – that is a dish always current.”

What follows is a paean to pork fat and head cheese, but already you’re realizing that the point of a healthy breakfast isn’t the meal itself. It’s the work we do after consuming it, and, as a nation no longer wielding axe and adze against a fickle landscape, a nation growing buttocks instead of beetroot, we don’t deserve a breakfast like that. Pass the yogurt.