Art Isn’t Easy Dept.: In case your Metroland reading is intermittent – or you breeze on past whatever follows the food page – here’s a book review I have in the current issue.

THE RANKS OF WELL-KNOWN cartoonist-writers include James Thurber and Lou Myers, but unlike Robert Hughes, who moved from cartooning to art criticism, or Ad Reinhardt, whose cartoons were criticism, John Updike never professionally pursued his own drawing ability. In that regard, he’s like the early-20th-century writer Booth Tarkington, whose sketches livened the horrible penmanship of his letters. 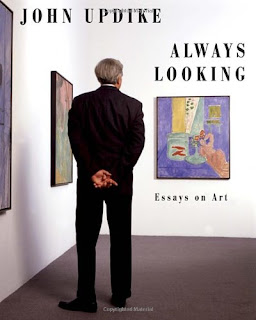 Both of them wrote about art late in their respective careers. Tarkington’s Some Old Portraits (1939) paid gossipy but insightful tribute to a selection of 18th-century works; the 23 essays in Updike’s first collection, Just Looking (1989), introduced us to a novelist unafraid to summon beautiful language to examine his relationship with the pre-Abstractionist world. From Vermeer in the 17th century to the still-living Richard Estes, the collection also gave a nod to cartoonists like Ralph Barton and fellow writer-cartoonists like Goethe, Poe, Oscar Wilde and Flannery O’Connor.

Another collection, Still Looking, followed in 2005, focusing on American art and covering such painters as Copley, Homer, Whistler, Hopper, Pollock and Warhol as well as photographer Alfred Stieglitz. After Updike died in 2009, enough uncollected essays remained for a final celebration. As a title, Always Looking tops the first two with its comforting, if Olympian, declaration of continuity; as an essay collection, it’s broader-based, but also solidifies the range of Updike’s favorites.

He loves portraiture, and the chapter on Gilbert Stuart is a study of a painter “so professionally, so Europeanly adept, yet Yankee enough to peer through the social mien at the inner life behind it.” He’s critical of line, and sees in Frederic Church an artist more thrilling in his “quick, on-site oil sketches” than in the finished landscapes that made his reputation.

Most of the essays were written about specific exhibitions; thus we have Monet at Boston’s Fine Arts Museum, Degas at the Met and a look at the art-collecting Clark brothers, Stephen and Sterling, in honor of a 2006 show at the latter’s Williamstown museum, exploring the life of a family at least as interesting as the works they collected.

Mere words rarely satisfy the challenge of capturing a sense of visual art, and if Updike is wont to fall into a singsong pattern of twinned modifiers – Édouard Vuillard’s lesser works can be “as small and sketchy as The Seamstress (1891) and Workers at the Chiffonnier (1892) or as scrubbily unfinished as A Seamstress (1892-93)” – the book is dominated by dancing prose.

We move chronologically from Impressionists to the 20th century’s fragmentation; thus Miró leads to Magritte, and Oldenburg and Liechtenstein are considered before we finish in the steelyards of Richard Serra.

Regarding a pair of Serra’s outsized sculptures, Updike wonders “how do the visual stimulation of these two outdoor pieces differ from those to be obtained by walking around a shipyard where some weary freighters have come to rest?” He leaves the question rhetorical, noting only that the real-life steelscape can provoke “sensations even more dizzying, if dizziness is the desired effect.”

Updike’s success as a critic and social observer, which he pursued as ardently as he did his fiction, came from his ability to convey intelligent insight with a compellingly accessible voice. In an overview of American painting written in 2008 for the Jefferson Lecture in the Humanities, he has this to say about Colonial portraitist John Singleton Copley:


The confident theatricality of English portraits, when Copley attempts it, seems to embarrass his down-to-earth colonial subjects, and turns their expressions ironical; see, for example, Sylvester Gardiner’s in his 1772 portrait. If their poses are stiff, it is an honest wooden stiffness; in Copley’s paintings of English gentry, the stiffness is burnished to a metallic lustre, and rings hollow. Even in his most admired and ambitious English painting, The Death of Major Peirson ... the central pictorial incident, with its single drop-shaped drop of blood, feels staged to the point of farce.

Like a good portrait, the art livens the subject – in this case, the writer’s art, in which each clause and unusual word-form adds a note of arresting color. Compare it to this passage from Tarkington, describing Peter Lely’s 17th-century subjects:


[Lely] gave these sitters what they wanted, and what they wanted was to be in the fashion ... Most of the great ladies of the Restoration desired to look like one another, just as they desired to dress and behave like one another. They curled their locks alike and used their eyes alike; they wished to be big-eyed, lazy-eyed, a little wanton-eyed and to show in their eyes the consciousness that lovers adroitly besieged them. They wished to be ample in body and not too young-looking; they wished everyone to know all about their bosoms.

The heightened language of both passages reminds us that paintings, like novels, best reward those inclined to linger with them longest.