From the Record Shelf Dept.: Yesterday’s piece about my time at radio station WMVI reminded me of my passion for swing bands, and to honor that I’ll share my reviews of a couple of excellent reissues – of two clarinet-playing leaders who probably wouldn’t wish to share a column.

MOSAIC’S RECENT-YEARS POLICY of reissuing only selected items from a given recording session has infuriated a few fortissimo posters on jazz-based internet message boards, but it gives us such treasures as the recently issued seven-CD Artie Shaw set, spanning the years 1938 to 1944, when Shaw and his orchestra were at the peak of their popularity. 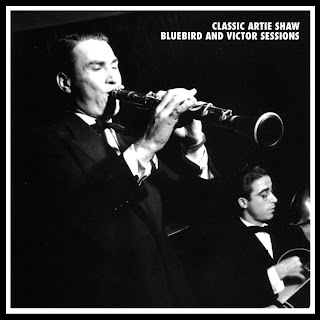 And it starts with a bang: Shaw’s hit recording of “Begin the Beguine,” the Cole Porter song that had been deemed unrecordable because its unusual length would never gain popularity. It was his first session with a newly formed band on a newly signed contract with Victor Records, and went on to sell phenomenally.

But Shaw didn’t come from nowhere. A much-in-demand studio clarinetist in the 30s, he first put together a band with strings, a band that flopped even in the wake of Benny Goodman’s sudden popularity. He retrenched, redefined and put together “the loudest goddamn band in the world.” And was off like a shot.

That June 1938 Victor session also produced the only recording featuring the band with vocalist Billie Holiday (“Any Old Time”), who left shortly thereafter because of a myriad of racial issues. That vocal is included in the set, but 68 others were passed over, 43 of them by the reliable but not terribly jazzy Helen Forrest.

I’ve heard those vocals and they’re enjoyable, but the only one I really miss is Pauline Byrne’s “Gloomy Sunday,” and only then for its contrast with the nonpareil Billie Holiday version. Lena Horne’s 1941 sessions are here, more out of historical than stylistic interest.

Fame proved to be an albatross for Shaw, who wearied of the constant demand for “Begin the Beguine” and the boorishness of the jitterbugging fans. He walked off the bandstand one night in November 1939 and fled to Mexico, but returned a few later to finish a contractual recording obligation – and produced another killer hit, “Frenesi,” at a session (with strings, finally) that also produced a fascinating version of classical composer Edward MacDowell’s piano sketch “A Deserted Farm,” not released until 1978 and even then unfairly damned by the intolerant Gunther Schuller.

But that was a nice reminder that Shaw’s work can continue to confound his critics. In 1940, he drew a six-man ensemble from his orchestra and dubbed it the Gramercy Five, featuring Johnny Guarneri on (a terrible sounding) harpsichord for a unique percussive bite. Far more comfortable with brilliant soloists than was Goodman, Shaw welcomed trumpeter Hot Lips Page into the band in 1941, and Lips’s vocal on “Blues in the Night” is definitive.

Shaw’s last big band in this collection was formed during wartime, and another trumpet star, Roy Eldridge, was featured in recordings that centered around the best of the standards, including plenty of Gershwin.

If you take Ellington’s band as the pinnacle of color and innovation, then Shaw wasn’t too far behind. Terms like “restless” and “inventive” have been thrown at the clarinetist since even before he put down his axe for the last time in 1954, but as these brilliant recordings attest, they still apply.

ALONGSIDE MOSAIC’S MISSION to present older jazz recordings in the best possible sound with scholarly annotations has been a dogged pursuit of completism. Which is great for an obsessive collector like me, who wants access to every scrap of a particular artist’s output.

This has drawbacks. So much of my Complete Glenn Miller (Bluebird, not Mosaic) is made up of shitty vocals that I rarely revisit more than a few terrific instrumentals. Few big bands went unfettered by such dreck. 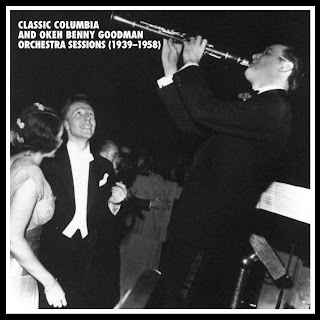 Mosaic has taken this into account and revised their mission slightly. The new Benny Goodman set, covering recordings he made after his glory days at Victor, brings to light seven CDs’ worth of material the clarinetist recorded for Columbia (and its cousin, Okeh) between 1939 and 1958. There are chronological gaps: the early-40s recording ban, a jump to Capitol. There are format elisions: the small-group sides, well covered in Charlie Christian sets. And now, with use of “Classic” instead of “Complete” in the box set’s title, there are interstices of discernment: the vocal sides, which featured Helen Forrest or Peggy Lee, and which, as the producer notes, already are CD available.

The high point here are arrangements by Eddie Sauter and Mel Powell, pushing the concept of the big band sound into the bop era, discovering new textures in the standard brass-reeds-and-rhythm instrumental forces.

Turn immediately to Disc Two and listen to “Benny Rides Again,” an Eddie Sauter chart from 1940 that draws from the drums-and-brass furor that made “Sing, Sing, Sing” such a success and takes it to surprising places. The hallmark Fletcher Henderson call-and-response patterns are there, but they’re thicker, more plangent. And the number opens with a wonderful growly noodling by trumpeter Cootie Williams, taking a break from the Ellington band. And this set contains an alternate take that truly is alternate, showing some very different ideas not only in the solos but also the construction of the piece itself.

“Clarinet a la King” is the better-known track, another Sauter accomplishment. Mosaic gives you no fewer than six versions, offering subtle but fascinating differences. Also in the Sauter realm is “Ramona,” distinguished here by a rare Goodman breakdown track that must have given the pernickety leader conniptions.

Powell was a teenaged jazz-piano encyclopedia when he joined the band. He could swing like a madman in any style, including a voice of his own that he improbably would take into classical music, becoming a distinguished composer-professor. But that was far in the future when he was comping so delightfully behind his own arrangement of “String of Pearls,” sending the Miller chestnut into what I can’t help but believe is a different interpretation of its title.

After some late-40s years away, the band is back in 1951 with a number of ’30s alumni at the stands, including Chris Griffin and Hymie Schertzer, and with other Swing Era veterans like Billy Butterfield and Bob Haggart giving new voices to old Goodman charts. Songs like “When Buddha Smiles” and “King Porter Stomp” get new life and, despite some turgid Goodman with Strings sessions (tastefully remanded to the end of Disc Seven), bring the collection to a tasteful close.

As with all Mosaic releases, it’s been meticulously remastered, rescuing even some of the more neglected alternate takes from audio oblivion, and Loren Schoenberg’s notes are a model of insight and analysis. This may seem like a perfect holiday gift for an aged relative, and you’ll no doubt score big points. My advice? Steal it back.