Summer on the Boards Dept.: Once upon a time, summer was the season of an incredible array of plays presented in repertory at venues seemingly everywhere. While the number of such things has dwindled, the greater Albany area teems with promise – if you don’t mind driving to Massachusetts and Vermont and beyond. And you shouldn’t. Here are a couple of shows I reviewed at theaters that still, 26 years later, are going strong.

OSCAR WILDE'S The Importance of Being Earnest meets Noël Coward's This Happy Breed in a new play at the Dorset Theatre Festival. Thom Thomas wrote Without Apologies as a whimsical suggestion of what may have happened to the main characters of Earnest some two-score years later. 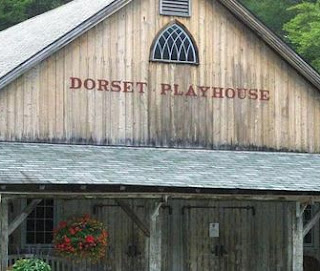 And so, surprisingly, Algy is married to Gwen and Earnest has wed Cecily – not what we were led to expect as the curtain went down in 1899.

Furthermore, Algy and Gwen are making do in a smallish house in a not entirely fashionable part of London with octogenarian Lady Bracknell tucked into an upstairs room except for her weekly pilgrimage downstairs to listen to the wireless. And they let rooms to a lodger, a musician.

Into this set-up come Earnest and Cecily and their blowsy, 30-year-old daughter, Brenda, desperate for lodgings.

The danger with taking characters from Oscar Wilde is that you expect more of his epigrams and situations. There is comedy here, but it's of a more domestic sort.

And, as we follow the progress of the two families over a course of seven years, the flavor becomes much more that of Coward, who was never more sentimental than when dealing with London through the Wars.

But Thomas overcomes all preconception by delivering a play that does, indeed, stand on its own – as a piece of fluff, mind you, but highly enjoyable fluff.

And just right for a cast too long in the tooth to attempt Wilde any more. Edgar Lansbury has directed an ensemble that shines, each one more dotty than the last. Ron Randell and Richard Lupino, as Algy and Earnest, could easily have been swapping highbrow wisecracks 30 years before – the lies and insults they exchange as dotards are only too characteristic.

Pauline Flanagan has a stiff-upper-lip grace that threatens to turn into a scream at any moment. As Gwen, keeper of a yard of chickens, she is an aristocrat still unable to accept her lot as housewife.

Cecily, on the other hand, pursues her fantasy life with vigor. Elizabeth Shepherd seems to have stepped out of Private Lives, and most appropriately, as she and Algy rekindle their amour of old.

Daughter Brenda isn't much of a catch, and Amanda Carlin has a great time flaunting her interest in lorries and food. When she does fall for a fellow, it's the taciturn Willie Jukes, allowing Jim Fyfe to give a stand-out performance in a cameo role.

The title of the play probably applies more to the playwright's attitude in presenting it than to any twist of the plot, and that's as it should be: he has nothing to apologize for and quite a lot to be proud of.

THE ANSWER MAY LIE in a back copy of Scientific American. Or it may have been that trip to the Holy Land. Whatever the reason, teenaged Teresa is pregnant but still a virgin and she's not sure whom to tell about it. So she takes it to the confessional, where  young Father Doyle listens with incredulity.

Tuesday's Child, receiving its American premiere at the Williamstown Theatre Festival's Extension stage, is that rare gem of a show that examines a serious issue without undue solemnity. Writers Terry Johnson and Kate Lock take a premise as simple as it is absurd and develop it into an amusing series of confrontations.

They are helped by the fine acting of the ensemble. Elizabeth Berridge brings baby-faced innocence to the role of Teresa, while Terry Kinney's Father Doyle is a man struggling to fit into the mold he believes appropriate to a country priest.

There are the expectable problems throughout maintaining the needed dialects for the Irish setting, and Nick Brooks, as Teresa's brother, Sean, has more problems than the rest, but his characterization is nevertheless consistent.

Is it possible to have a virgin birth in 20th-century Ireland? Father Doyle suggests parthenogenesis, as occurs in some hen's eggs (according to his scientific reading). But Teresa's family is about ready for a miracle, and, until the surprisingly disappointing birth takes place, treats her like a saint.

For all of its charm, the play is weakened by its predictability of character: they're pretty much stock items, sparked by the acting and the humor of the script. Kay Matschullat's direction makes the most of that humor with a good sense of pace, and the cast's timing does the rest.