“DOC SEVERINSON USED TO SAY that whenever I appeared on the cover of Down Beat, that’s the issue the boys took into the men’s room.” Thus boasted Betty George, and I had no doubt of her story’s authenticity. Especially when I saw one of those covers.

Thanks to the movie “Behind the Candelabra,” anyone with a Liberace story to tell is telling it. Writer Mark Evanier has a great one here. Mine is comparatively lame, but it’s awash in background info that might interest Albany-area folks of, as they say, a certain age. 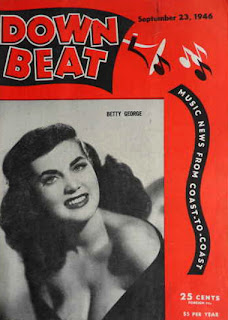 In 1983 I was dealing with chronic joblessness. I’d spent less than a week pushing vitamins at a GNC mall store, but decided, once my wife announced she was moving out in order to spend more time with her boyfriend, that such work was beneath me. In the shittiest, luckiest day of my life, I went on a date the night my wife vacated the apartment and through a convoluted series of circumstances ended up on another date that night – with the woman who would become my second and, as things look now, final wife.

Bad enough that I was married. Being jobless made me look like a complete failure, something I prefer to reveal in increments. So I got hired in the kitchen of Schenectady’s Mohawk Club, serving the self-styled elite (whom I later would take a swipe at in this article). And I pitched myself to the local newspapers as a classical music critic, resulting in some dribbles of such work that year and then, in early 1984, an offer to write regularly for Albany’s Metroland Magazine.

I gave up the restaurant work. The money from writing wasn’t enough. Having already worked as a professional (albeit classical music) radio announcer, I got a job at WMVI, a tiny daytime AM station in Mechanicville with a big bands and jazz format. (One of my more memorable days there is described here.) In addition to hosting the afternoon segment on weekdays, I’d often be called in to cover other shifts, including engineering Betty George’s weekend show.

She was a phenomenon whose history I knew nothing about, until station manager Chris Martin clued me in. She got her break in the Albany area after an immediate success on television with David Allan, and soon she and her dog Moo were presenting the weather on Channel 13. But before that she had an even more impressive career that took her from nightclubs to Broadway.

Born and raised in Manchester, New Hampshire, she began performing while in high school, and shortly after graduation got a job singing with Glen Gray’s Casa Loma Orchestra, one of top-flight bands of the era. She scored a Down Beat cover in 1946 for obvious reasons but, she told me, “I was a good girl. I had to be – my mother was always there.”

She went from Casa Loma to Xavier Cugat’s band, and from there to Broadway, debuting in 1948 in “Heaven on Earth” with Peter Lind Hayes. It ran a mere twelve performances, but she bounced into Michael Todd’s “As the Girls Go” a couple of months later, a Bobby Clark vehicle that ran into the beginning of 1950.

She impressed Milton Berle enough to get hired as part of his nightclub show, which took her from New York’s Latin Quarter to El Rancho Vegas over the next 16 years. And Broadway called again in 1955 for her biggest success there, “Ankles Aweigh,” a vaudeville-style show featuring Jane and Betty Kean, and which prompted columnist Walter Winchell to praise by deeming Betty George “one of the ten most beautiful women alive.”

Along the way she met (and was admired by) top names in the entertainment world. Sinatra. Peggy Lee. Tony Bennett. The list went on – I didn’t believe half of it. But I didn’t know then how much time she spent in Las Vegas, which is where, I assume, she met Liberace. “Lee is a wonderful friend,” she told me one afternoon at the station as I was cueing her records and carts. “If he calls, can you put that on the air?” I promised to try. The control board was ancient and I’d never patched in a call before, but I rummaged around the connectors and cobbed together something.

She got him on the phone while one of her records was playing, and told him about her wonderful new engineer. “Here!” she said, thrusting the phone at me. “Say hi to Lee!”

“Hi, Byron,” drawled the unmistakable voice on the other end. “Betty’s told me all about you and what a wonderful job you’re doing for her. I’m so glad you appreciate our music!” And then it was back to Betty while her record ended, and I got them on the air for a few moments of mutual admiration gushing.

And that’s the entirety of my brush with that particular strain of greatness. I left WMVI towards the end of 1985. I was newly (re-) married and teeming with ambition and wanting very much to pursue the freelancing career I’ve followed ever since.

I don’t know that I would have had much to say to Liberace had I gotten a word in; what I regret is that I never pumped Betty for more about her life and career – she, as I’ve heard from others since, had some stories to tell!
Posted by B. A. Nilsson at 8:32 AM

Thanks for all the good Betty George memories! Miss that lady!

Terrific article. She was a big part of my childhood. She was quite a lady! Thank you!