What You Pay For

From the Back of the Fridge Dept.: Back when I was reviewing restaurants for Albany’s Metroland magazine, we enacted a policy whereby we didn’t bother with the chain eateries. My long-ago visit to a brand-new Olive Garden, reviewed below, was one of the reasons. (But they showed up in a more recent piece about food-delivery innovations.)

We showed up on a Saturday afternoon at quarter to five. The parking lot was packed; people waited on benches, at the bar and in a straggly line that stretched to the door. We had an event to get to and couldn’t wait. We returned at 10:30, a half hour before dinner service stops. The place was still pretty full but – except for us – it was by now exhaling customers. 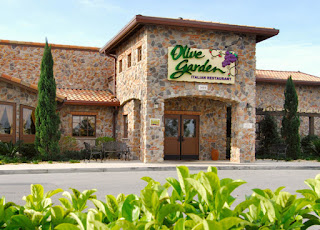 The Olive Garden, which arrived in late November, is clearly a hit. And why shouldn’t it be? Under the guise of offering Italian fare, it serves the same kind of bland but over-salted cuisine that too much of America microwaves at home in the pursuit of dinner.

In other words, don’t look for fine dining here. Don’t even look for the kind of cooking that makes your neighborhood Italian eatery special. It’s assembly-line stuff. Some of it is amusingly non-Italian, like the “Italian Scallion,” a mass of fried onion pieces. Then there are items with Italian roots given an Olive Garden conversion into bar food, like the fried ravioli and mozzarella wedges that join stuffed mushrooms and fried zucchini in the Italian Sampler.
You won’t many frighteningly foreign terms on the menu, so it’s comfortable for the easily-intimidated diner. Let’s take a closer look at that menu for a moment. A splash of yellow highlights an item or two in each category--appetizers, pasta, entrées, etc. – which identifies them as House Favorites. No need to strain your brain with choices. And if Dad just can’t give up his steaks (“Hey hon, a little pasta won’t killya, maybe bring down that cholesterol a little!”), the “Roman Feast” puts fettucine Alfredo and garlic shrimp on the plate with a grilled sirloin. In other words, the menu has been market researched to a fare-thee-well.

Ironically, if price concerns are sending people here, they’ll discover that for-real Italian restaurants don’t charge much more. But those restaurants aren’t quite so close to Wolf Road’s shopping heaven.

Obviously, it’s important to move ’em in and out as efficiently as possible here, so don’t worry about waiting for your food. And, at 10:30 at any rate, we didn’t have to wait for service. It’s robotlike in its efficiency. I started with zuppa Toscana, which puts sausage, potatoes and greens in a light stock flavored with milk and salt. Caesar salad didn’t originate with that Caesar, but it’s ubiquitous. And, Olive Garden style, it’s wrong, adding artichoke hearts, olives and carrots, subtracting croutons and anchovies and topping it with a dressing only faintly reminiscent of what made the salad popular in the first place. We also sampled the abovementioned Italian Sampler, which is glorified bar food. Warm bread also comes to the table. Breadsticks, they call them, but they’re just skinny rolls, nothing like the crusty loaf of a real Italian restaurant.

Capellini primavera is slugged with Olive Garden’s “Garden Fare” symbol, denoting a low-fat dish. It’s a mix of vegetables (lots of squash) over angel hair pasta, served with grilled chicken for a couple of dollars extra. It’s not bad; it’s not good. Like network-devised comedy, it’s bland. But our expectations had been by then dimmed, so we got what we expected.

The “Tour of Italy” promises chicken parmigiana, lasagna “classico” and fettucine Alfredo. Many years ago, an Italian chef taught me his family’s tomato sauce recipe, and the care that went into it also taught me respect for what seems like a simple item. There was sauce on the chicken, but with none of the complexity that sauce can achieve. Ditto the lasagne, which traditionally plays with the texture contrasts of pasta, meat and cheeses, each component of which adds a special flavor. This was lasagne-by-the-numbers. And, as with Caesar salad, the tradition of fettucine Alfredo is a tableside preparation that yields a rich, exciting sauce. I don’t ask that it be made before my eyes, but this version is a pale ghost of the original.

We packed up a lot of leftovers and dived into dessert, but mass production also dimmed our selections of any uniqueness. In fact, the cheesecake I ordered and Susan’s brownies & cream extreme tasted fairly interchangeable.

Nothing I write here is going to deflect the masses from chain restaurants that suck customer dollars out of the area and do nothing to improve the culinary ignorance of said masses. You read Metroland, so you’re not one of them. Why waste money on mediocre food? Because convenience triumphs over taste. English lacks the proper word to describe the phenomenon, but in German there’s a distinction between how humans consume food – essen – and fressen, which is how animals eat. So never mind all this Italian malarkey – Guten Appetit!

Dinner for two, with tax, tip, dessert, and a couple of glasses of wine, was $56.