NEARLY A HALF-CENTURY AGO, I celebrated the turn of the year (and a turn of the decade) with a trio of friends and a pair of boxes of pizza, which I lazily left in those boxes when I put them into the oven to reheat. We were at the home of one of those friends, and his parents had thoughtfully repaired to an upstairs room before the clock struck twelve. 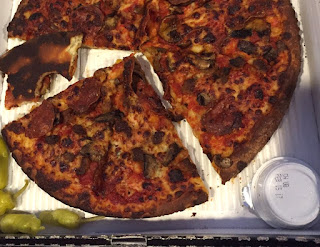 Did they smell the smoldering cardboard? We didn’t. It wasn’t until I fetched the pies that I saw the blackened containers dropping ash on top of the pepperoni and cheese. Did that stop us from consuming the stuff? It didn’t.

In fact, it seemed like an appropriate way to kiss off the ’60s, which we, in our mid-teens, barely had the chance to enjoy. We’d do better in the ‘70s, when (at least) we’d all get laid.

Those New Year’s celebrations would continue to accumulate, of course, in a variety of forms for me. One of them found me stuck in a snowdrift with a friend whose antique Imperial met its match in some snowy Connecticut back roads. I spent many of them in restaurants as a waiter or chef, pouring champagne or banging on kitchen pots as the calendar flipped. That was work under battle conditions, and you bonded closely with your fellows.

Radio, on the other hand, was a solitary occupation. Even though I addressed a seemingly limitless audience via microphone, there was barely a sense of them in the studio – except when they phoned to complain. I always tried to get the New Year’s shift because there was extra pay and it felt better to be lonely at work than lonely at home.

A few years ago, my daughter made it to the semi-finals of the Miss Teen NY pageant, an amusing story in itself, and received as a result an invitation to join the Wounded Warriors in their reserved area in Times Square to watch the ball drop. I’m guessing that said warriors figured on the women being somewhat older, but resourceful Lily wangled tickets for her parents so the three of us could be escorted to the area on a cold, clear night. We didn’t get there until about 8 PM and, unlike those who’d staked out spaces many hours before, we had bathroom access. In other words, they were luxurious accommodations. And I give you more details and a photo from the event here.

I’ve also performed on New Year’s Eve, usually as part of a city’s First Night celebration. My cabaret show was part of Albany’s inaugural such event, and we performed there for several years thereafter. We did a few in Saratoga Springs, and for the past two years I’ve sung at Steamer No. 10 Theatre, a charming space in Albany’s midtown.

But those performances finish well before midnight. My wife and I would like to celebrate at the magic moment, but she’s now fighting sleep once the time passes 10. We’re not inclined to join a restaurant fête, and if we end up at home I’ll settle in gloomily to listen to the Berlioz Requiem, something I learned from Columbia University radio station WKCR, which used to “mourn the passing of the old year” in that fashion. So this year we ordered a pizza and some wings via the Mealeo website, and our food was ready for pickup the very minute we’d asked it to be. We took it to the Schenectady home of Malcolm, the pianist I’ve worked with for 30-some years. I found some Duke Ellington videos on YouTube. We didn’t burn the pizza box.
Posted by B. A. Nilsson at 11:37 AM