From the Vault Dept.: I treasured the six-record set of Lionel Hampton’s small-group recordings that was issued in the waning days of the LP era, so it was a thrill to see these sides (and more) get the Mosaic Records treatment in the deluxe five-CD set that I reviewed below. But Mosaic licenses limited-issue releases of these sets, and the 5,000 copies of the Hampton set have long since sold out.

VIBRAPHONIST LIONEL HAMPTON became a sudden star in 1936 when Benny Goodman featured him in a quartet. Soon after that, Victor Records invited Hampton to record a small-group session under his own name, so Hampton brought a bunch of Goodman bandmembers into the studio and laid down four memorable tracks. A phenomenon was born. 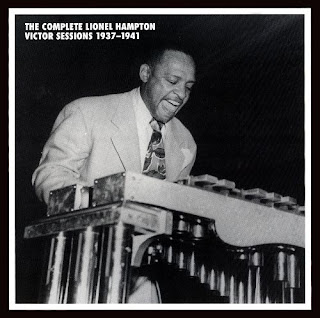 It was hot, joyous and relatively short-lived. Twenty-three sessions over the next four years yielded about four tunes apiece. In terms of jazz interest, some are more successful than others, but even the most negligible of them are still entertaining. And the peaks are impressive indeed.

Much of the material was collected late in the LP days, but only sporadic CD issues have seen light of day. Mosaic Records’s new five-CD set collects the totality of those Hampton session, and with that company’s trademark thoroughness presents superior transfers of the original material along with all known alternate takes.

Personnel also were drawn from the bands of Duke Ellington, Stuff Smith, Count Basie and others, which benefitted from having players already accustomed to working together. Sessions in April 1937, for example, featured Ellington sideman Johnny Hodges, whose “On the Sunny Side of the Street” became a hit and has endured as a classic.
In July 1938, Hampton put together a session that drew from no one single band: a young, dynamic Benny Carter played reeds and provided arrangements, Harry James was on trumpet and Billy Kyle, John Kirby and Jo Jones populated the rhythm section to produce jumping tunes like “I’m in the Mood for Swing” and a revamping of the chestnut “Muskrat Ramble.”

Even more spectacular recordings emerged in 1939, when such luminaries as tenor sax wizard Chu Berry played on several sessions. The trumpet seat changed from date to date, but always with high-quality talent like Ziggy Elman, Rex Stewart and, late in the year, Dizzy Gillespie.

Hampton took the vocal refrains early on in the series, in a light, pleasing but forgettable voice – “Baby, Won’t You Please Come Home” is an absolute nadir – but soon yielded to more talented singers like Helen Forrest and Cole.

Detailed, informative program notes by Loren Schoenberg offer a historical perspective of the sessions, and then give a track-by-track analysis that nicely enhances enjoyment of the music. And enjoy it you will. This is an indispensable gem from the swing era, lovingly remastered to the kind of quality Mosaic’s reissues consistently deliver.