From the Smut Vault Dept.: Back in the glory days of the internet’s infancy, I wrote a computer-information column for a magazine called D-Cup, the thrust of which needs no explanation. Under the moniker “Dr. Barry Tetons,” I guided the lusty wayfarer to where the red lights shone on the information highway. This was my debut piece, from late 1995. Unlike my readers, it couldn’t be more dated. (Here's another such piece, and another.)

YOU’VE HEARD ABOUT THE INTERNET. You may even know that its most passionate users are also passionate about a free exchange of ideas. What you may not know is that large-breasted, beautiful women are among those ideas, and just in case you don’t get the idea, you can get the picture – a full color, let’s-leave-nothing-to-the-imagination picture, that is. 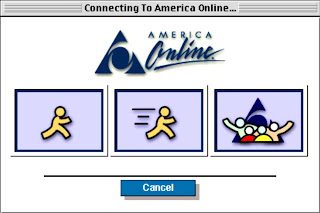 Let me be your guide. I’ve been working with computers for a decade, and if there’s smut to be seen on the screen, I’ve seen it. I’ve taught computer beginners in classrooms but that’s far too polite and forces me to leave out the good parts. The good parts I’m going to help you find every month as we explore together.

All you need is a good computer, the right software, and a little know-how. Let’s talk first about your hardware. I’ll show you mine: it’s an IBM clone, based on a 486 processing chip. It’s got 8 megabytes of memory, and a good color monitor. That’s the basic stuff to run Microsoft Windows, and the easiest way for us peeping Toms to find our thrills is to look through Windows. You can find a system like this for well under a thousand bucks.

First, a brief history. Sex has always been an important driving force behind technology, and from the day that the first computer-based screen flickered to life there have been tits and ass alongside the spreadsheets. It was crude stuff, in the worst sense of the word; the really good crude stuff needed color monitors and high-resolution graphics for anything approaching photo-realism.

The smut pioneers distributed their material through computer bulletin board systems (BBSes), which are just computers that are left on all the time, hooked to a phone that anyone can call. You need a modem attached to your computer, with a phone line plugged into the modem, to translate signals from phone to computer, and communications software to tell the computer how to handle the modem. BBSes became so popular that a few nationwide services evolved, the biggest being Compuserve, Prodigy, and America Online.

That’s one reason why things change daily on the Internet. But there are newsgroups – called Usenet groups – that monitor such things. So the first thing you want to do is hook up with the right Usenet groups.

The Internet itself is free, but unless you’re at a college, you’ll have to pay to get access to it. We’ll consider a few different angles in the next few months, but let’s start with what may be the easiest way in, through America Online (AOL). You’ve seen their startup diskette included with computer magazines; you may have gotten one through the mail. Otherwise, ask a computer nerd friend, or call 1-800-xxx-xxxx to get the free software. Follow the enclosed instructions to install the program and create an account. AOL costs $9.95 per month, which gives you five free hours of online time; exceed five hours and you pay $2.95 for each additional hour. If you’re near a city, your access number will probably be a local call.

When you’re finally logged on, go to the Main Menu. Choose “Internet Connection.” You’ll see a half-dozen buttons (also called icons) on the left; choose “Newsgroups.” AOL plays a peekaboo game with the lusty stuff, so you won’t find the juicier newgroups listed in the “Add Newsgroups” area, even when you search under “Alt” (for “alternative,” which is the prefix to most of the sex-related groups). So you can’t use the “Add Newsgroups” button – on that next screen, choose the button marked “Expert Add.”

You get a small screen with an empty box marked “Internet Name.” Type in (without the quotation marks) “alt.sex.breast.” Click “Add.” If you did it right, you get a message telling you you’re subscribed. And you’re back at the input box, so delete what you just wrote and type “alt.binaries.pictures.erotica.breasts.” Click “Add.” Close the input box by double clicking the upper left corner.

You’re back at the “Newsgroups” window; click “Read My Newsgroups” and you’ll see your new additions listed. Double click “alt.sex.breast” and you can follow ongoing discussions about breast-related matters; you can even talk to this magazine in that group (D-CUPMAG @AOL.COM). But it’s only discussion going on there. For photos, check out the listings in “alt.binaries.pictures.erotica.breasts.”

Some of these pictures are pretty large, so they’re broken into components. You’ll see such listings as “big wet bosom 1/7,” which means that there are seven messages in all, and you’ll find “big wet bosom 2/7" through “7/7" if the person who created the files did the job properly.

Finally, you’ll want to view the thing. A shareware utility called VuePrint will do the job of decoding and displaying the image, and you’ll find it back in AOL’s regular area. Go back to the Main Menu and click on the bar labeled “Computing.” The next menu includes a button marked “Software Center.” Click it and look for (and click on) a button marked “Search the Libraries” on the next menu. On the Search menu, click “Windows” and type “vueprint.” Now click “List Matching Files.” The result screen will list “VUEPRI.EXE.” Click “Download Now” and wait out the time it takes to transfer the file. Once it’s done, sign off of AOL and go back to the Windows Program Manager.

Pull down the File menu and choose “Run,” and type “\AOL20\DOWNLOAD\VUEPRI” in the box. VuePrint automatically sets itself up and adds an icon to your Windows screen. Start the program, acknowledge the introductory screen (the author would like you to pay $40 after a two-week trial period), and pull down the File menu. Choose “D” for UUdecode. The program should take you right to the \AOL20\DOWNLOAD directory, and lists whatever you found in your alt.binaries.pictures.erotica.breasts browsing. Highlight all of the component files in a set--or just highlight everything--and click “OK.” Pull down the File menu again, choose “Open,” and double click on a file name. Congratulations!