BY THE TIME THE PIANO MAKES ITS ENTRANCE in Brahms’s Concerto No. 1, we’ve been through a great deal of tumult. The piece is in D minor, emphasized by a timpani roll on D echoed by long notes in low strings. But the first theme, introduced by the violins and cellos, plays havoc with the tonal center, especially when a trilled A-flat shows up every couple of bars, doubled by a trilled D-flat in the cellos. 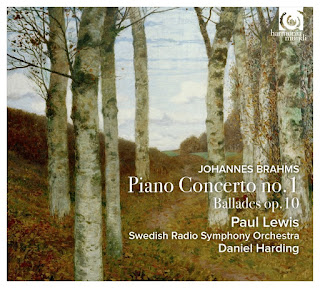 But it’s really a C-sharp, which comes into play when that theme is repeated. This is the funky third tone of the concerto’s dominant-seventh A-major chord, which Brahms typically gives us in plangent inversion, thus throwing that C-sharp to the bottom. There’s considerable restlessness in the majesty of this opening, even down to the built-in uncertainty of the many trills. We feel a sense of resolution only when the soloist enters, quietly, ninety-one measures into the piece. “Of course we’re in D minor,” the piano says, dancing gently in the composer’s ballade voice. “And we really weren’t very far from it at all.”

This isn’t a showpiece, but it demands virtuosity of the highest caliber. It makes sense for Paul Lewis to be playing it, because he’s a pianist for whom the virtuoso moment lies in communicating the essence of a work, and not just its flashy architecture.

We saw this on March 18 at Schenectady’s Union College, where (after a hugely successful all-Beethoven recital last year) Lewis played a recital that included Liszt’s “Dante” Sonata as its finale. Not Liszt’s flashiest-seeming work, but a piece whose intense technical demands well serve its intense emotional content. It’s a work of orchestral dimension, and Lewis summoned sounds from the piano that invoked brass and drums and strings.

The Brahms concerto has its own massed forces on deck, of course, as performed on this Harmonia Mundi recording by the Swedish Radio Symphony Orchestra conducted by Daniel Harding. The concerto almost became a symphony, which would have been a fascinating work, but the addition of the solo part doesn’t much alter its symphonic grandeur. The piano maintains its own identity, but doesn’t seem to quarrel as much with the orchestra as, say, the soloist in Beethoven’s later concertos.

It’s easy to get lost in too much thoughtfulness when playing Brahms, but Lewis has a voice of easygoing insistence, allowing him to let the phrases fall deliberately, rhythmically, but not too metronomically from his fingers. As he dances through his opening phrases in the concerto, a jaunty eighth-note sequence characterized by half-steps, he builds tension through dynamics, a long crescendo that nevertheless has a back-and-forth feel. But it leads to the inevitable: the joining of piano and orchestra in that opening theme, a sense that we’ve completed a thematic circuit and are about to explore it again.

Brahms and structure: an impressive pair. He was a traditionalist, like his Classical-era forebears, in an era when such traditions were being thrown away. Yet he found ways, like Schubert, to subvert those traditions in the service of what he had to say.

Thus it was appropriate that Lewis also programmed Schubert and Brahms on his recent recital. Schubert’s Sonata in B Major, D. 575, was supposed to follow Brahms’s Three Intermezzi, Op. 117, but Lewis opened with the Schubert instead.

Perhaps it was the anticipation of Brahms that made the Schubert sound all the Brahmsier. This early sonata has a folksong feel about it, with a dotted-note figure announcing its various melodic sequences and an overall sense of yearning. Certainly it gloried in the Romantic interpretive touches the pianist brings to it as if by instinct.

Which only adds to the image I have of Lewis as a very thoughtful interpreter, of the Alfred Brendel school, eager to meet a piece of music on its own intellectual terms. Here again, Brahms makes a perfect companion. The slow movement of the piano concerto (which shares a hymnlike quality with the Schubert slow movement) brings in the soloist after an orchestral intro that sets the mood of the moment, colored by French horns and woodwinds, and Lewis finds a similar timbre when he explores the same thematic material.

Five minutes into the movement the mood changes: piano and orchestra seem noisily unsure of themselves, and their attempts to return to the earlier comfort are undermined by questioning phrases. It’s a gorgeous example of Brahms’s skill in bringing the solo voice into the orchestral fabric without subsuming it.

Flash and fireworks crackle through the concerto’s final movement, a rondo that has hills to climb as it makes its jaunty way to a blazing finish. Lewis the technician is on display, but his prowess remains in service to the music, integrated nicely with Harding’s orchestra. Recorded sound is excellent, and it’s especially kind to the horns, allowing more bite to their overtones.

The concerto traditionally spanned two sides of an LP; filling out a CD of this piece is a challenge met here with Brahms’s Four Ballades, Op. 10, the same works that Lewis featured in the second half of his Schenectady recital. The first of them sounds a contemplative contrast with the concerto’s mighty finish, plunging into a mood of regret that soon blooms into a room-filling song of affirmation. The second, also an andante, starts out like a song without words, pleasing and plaintive, and it, too, finds a contrastingly punchy midsection.

Of course, the idea of a ballade is to evoke a sense of narrative song; with no actual text to characterize it, the piece has the challenge of making its emotional journey through pure abstraction. Brahms proved masterful, giving each of the four pieces its own identity and asking each of the four to take us on a different path. They alternate not only moods but also major and minor keys, and the last and longest of them, in B Major, also is the most labyrinthine. Gentle as it sounds, and as gently as Lewis seems to play it, you’re wrung out by the time it leaves you with a sweet, rhapsodic finish.

Back to the concerto: If the recording – or this look at listening to it – has whetted your appetite for Lewis in person, he’ll be performing it at Tanglewood in Lenox, Mass., during a concert at 2:30 PM Sunday, July 31, with Andris Nelsons conducts the Tanglewood Music Center Orchestra. More info here, and see you there.
Posted by B. A. Nilsson at 12:54 PM