Getting Sentimental over Tommy

From the Recorded Vault Dept.: It appears now that most of the big-time record labels have run out of reissues. Boxed sets used to rain upon us, replete with scholarly notes and alternate takes and previously unissued material; now it’s a trickle. Back in the LP days, RCA Victor, the home label for Tommy Dorsey and many other swing-era artists, made a valiant attempt to issue TD’s complete output in a series of two-record sets (described below). Ten years ago, on Dorsey’s centenary, the label’s then-current incarnation issued a three-CD set that featured a nice, if brief, survey of a nice variety of the bandleader’s work. Here’s my decade-old review. 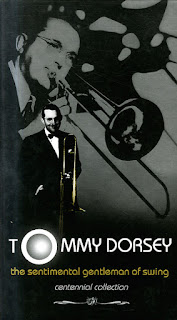 TOMMY DORSEY’S HUNDREDTH BIRTHDAY came and went with nary a murmur, which isn’t surprising. In entertainment terms, a century has become a unit of measure with something seemingly Pleistocene at the other end, a point of view created, however inadvertently, by the recording industry. But Dorsey wouldn’t be remembered at all if it weren’t for recordings, a well-chosen set of which was issued in commemoration.

He was a hot trumpet player in the 1920s who put that instrument aside in favor of the trombone, on which he developed a matchless way with ballads. As a bandleader, he was tough and impulsive, easy to alienate, quick to patch things up. He hired some of the era’s greatest talent for his big band, which churned out an amazing array of hits beginning in 1935, popularly culminating in his recordings with a young Sinatra in the early ’40s – yet it was also Dorsey who gave a young Elvis one of his first TV appearances.

Back in the ’70s, RCA began a reissue project intending to cover Dorsey’s entire recorded career, but it died after eight two-record sets that only made it into early 1939. Many of the recordings were forgettable nonsense, yet there’s a combination of craftsmanship and worthy jazz talent that makes any Dorsey side worth hearing. Still, I wouldn’t have wanted the job of confining my reissue picks to three CDs.

But that’s what this new set does. And it confines the Dorsey big band’s commercial releases to only one of the three discs, which, furthermore, ignores all but one of the band’s 17 number-one hit recordings – Irving Berlin’s “Marie,” with its great Bunny Berigan trumpet solo. Not that songs like “Opus #1" and “Boogie Woogie” weren’t popular – and here they are, cleaned up a little better than the last time they came out on CD. We’re also treated to some of the Dorsey band’s later recordings, including a couple of sides from a 1955 session.

The first CD sets up Dorsey’s history, following him through a succession of other ensembles, often alongside his sax-playing brother, Jimmy, with whom he eventually joined forces as contentious co-leader. The cuts, from 1925-32, include stints with Paul Whiteman, Sam Lanin, Red Nichols and others, with singers and soloists like Bing Crosby, the Boswell Sisters, Benny Goodman, Joe Venuti and many, many more.

Most interesting of the set is the third disc, a collection of aircheck recordings that typically struggle to see light of day. These are all Dorsey Orchestra recordings, but with that extra pizazz you typically hear when the band is playing for an audience. Here’s a kicking instrumental version of “Put On Your Old Gray Bonnet,” with trumpeter Ziggy Elman and drummer Buddy Rich adding excitement; vocals by Sinatra, Jo Stafford, a very young Connie Haines – and even Elvis’s “Heartbreak Hotel.” Not to mention a bizarre version of “Take the ‘A’ Train,” from a 1946 broadcast with Duke Ellington sitting in.

Much, much more of this band and this vintage should be available, online or on cheap CDs, but for now, this is a great place to start – and even finish – satisfying those Tommy Dorsey needs you probably won’t realize you have until you sample this set.